Robots and automation are altering our lives in a variety of ways, from self-driving automobiles to smart coffee makers in cafes. Robotics engineers are at the vanguard of this change, pioneering in every sector conceivable.

Automation and robotics experts have been relieving our lives of stress in more ways than we can imagine, from assembling to bringing machines to life.

They not only construct the computers we use, but they also maintain, fix, and create new versions of those devices. It is a big deal to pursue a profession in automation and robotics engineering since you will be in charge of many things that improve the world.

Robotics has a significant role in the key sectors that include mining, automotive, and manufacturing services. Therefore, to create devices that are beneficial in various areas, robotics engineers’ skill is needed.

We will go into great detail about robotics engineering in this post, including the crucial stages to becoming one.

Robotics engineering is a concept that integrates science, engineering, and technology. Engineering in this field focuses on the development of robots and how to use them in contemporary industry.

Robots are programmed devices that imitate human behaviors and can do basic or sophisticated jobs, such as carrying out difficult procedures.

Building software and mechanical hardware fall under the two domains of robotics engineering. 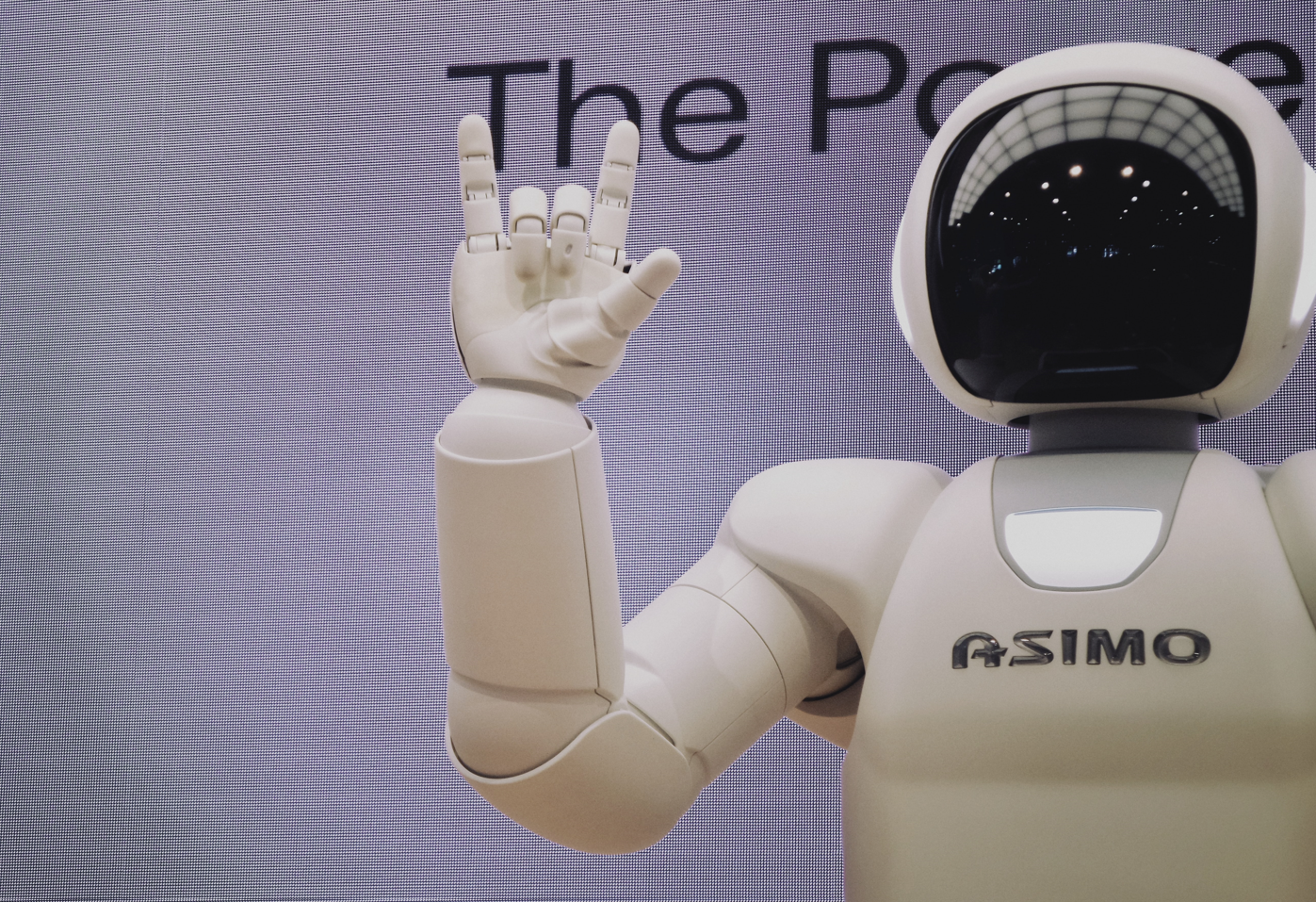 Robotics engineering’s software specialization is a good fit for anyone with a knack for coding. The actual assembly of robots is an option for those with mechanical backgrounds. A deep understanding of arithmetic, electronics, and computer science is necessary for robotics.

Additionally, it helps to have a working grasp of one or more programming languages. Additionally, robotics engineering connects fundamental engineering ideas like machine learning, artificial intelligence, and algorithms to build very clever devices.

The most important aspect of robotics engineering is its contribution to the development of superior labor substitutes for humans.

What is the role of a robotics engineer?

It is helpful to initially have some background knowledge of robotics in order to completely comprehend the role. A machine that can perform a physical action without human supervision is referred to as a robot.

The majority of robots in use today were developed to carry out just one task. For instance, robots in auto production facilities typically do extremely particular tasks like joining engine components.

Three unique aspects of a robot, each of which is connected to a conventional field of study:

This is the robot’s actual design, such as a mechanical arm, a drone, or a tiny probe. Robust hydraulic and pneumatic systems are used by robots to move. They also possess extensive networks of sensitive sensors that they utilize to observe their surroundings.

Software algorithms that either operate locally or on a network the robot are linked to controlling robots. This program used to be a complex set of instructions that specified to the robot what action to take in each and every circumstance.

Robots can now learn for themselves and modify their programs when conditions change thanks to machine learning and artificial intelligence (AI).

Robots require a method for their software and hardware to communicate with one another. As a result, each robot is equipped with a system that transmits commands from the software controller to the hardware and receives sensor data back from the hardware. 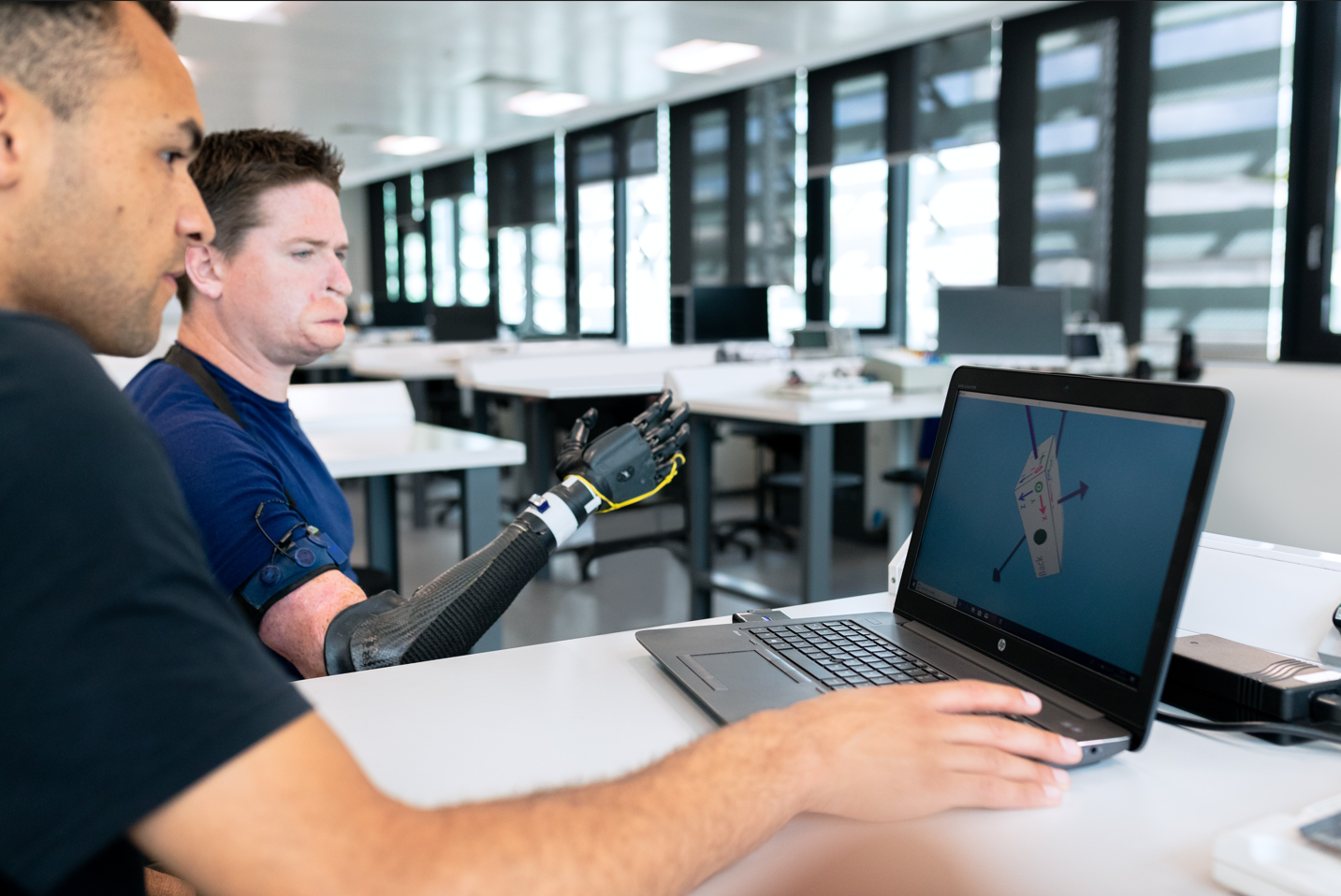 Even while current robots can be able to transmit data via Wi-Fi networks, this communication is often done through intricate cabling.

You must have a solid foundation in at least one of the aforementioned fields as well as a thorough grasp of the others in order to be successful as a robotics engineer.

As you can see, robotics engineering is a diverse field, and the nature of your employment can change depending on your employer’s specific requirements.

Taking on issues in the manufacturing, aerospace, and other industries will be part of your job in this role. A robotics engineer’s main job is to address issues.

Your position will include a number of the following duties, depending on the type of business you work for:

Robots exist to tackle certain challenges, such as automating repetitive jobs or performing functions that are too dangerous for humans. Robotics engineers begin each project by doing a thorough examination of the problem at hand.

What does the robot need to accomplish? What environmental factors could limit deployment? What kind of connection is there in the deployment zone? Before going on to the design stage, robotics teams must answer all of these questions. 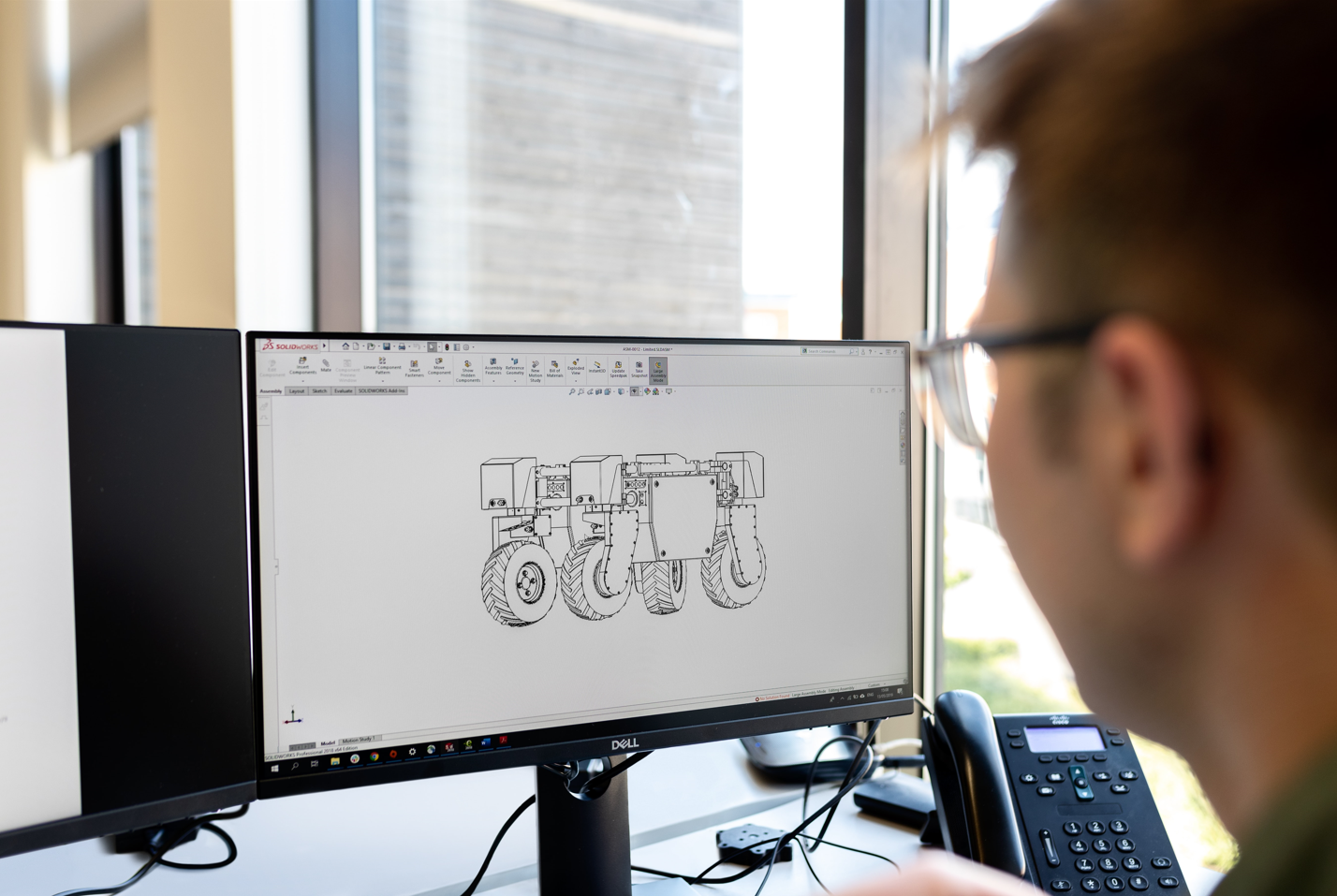 Robots, like any machinery, have wear and tear. Daily tasks like acquiring diagnostic data and performing necessary repairs are frequently handled by robot technicians. 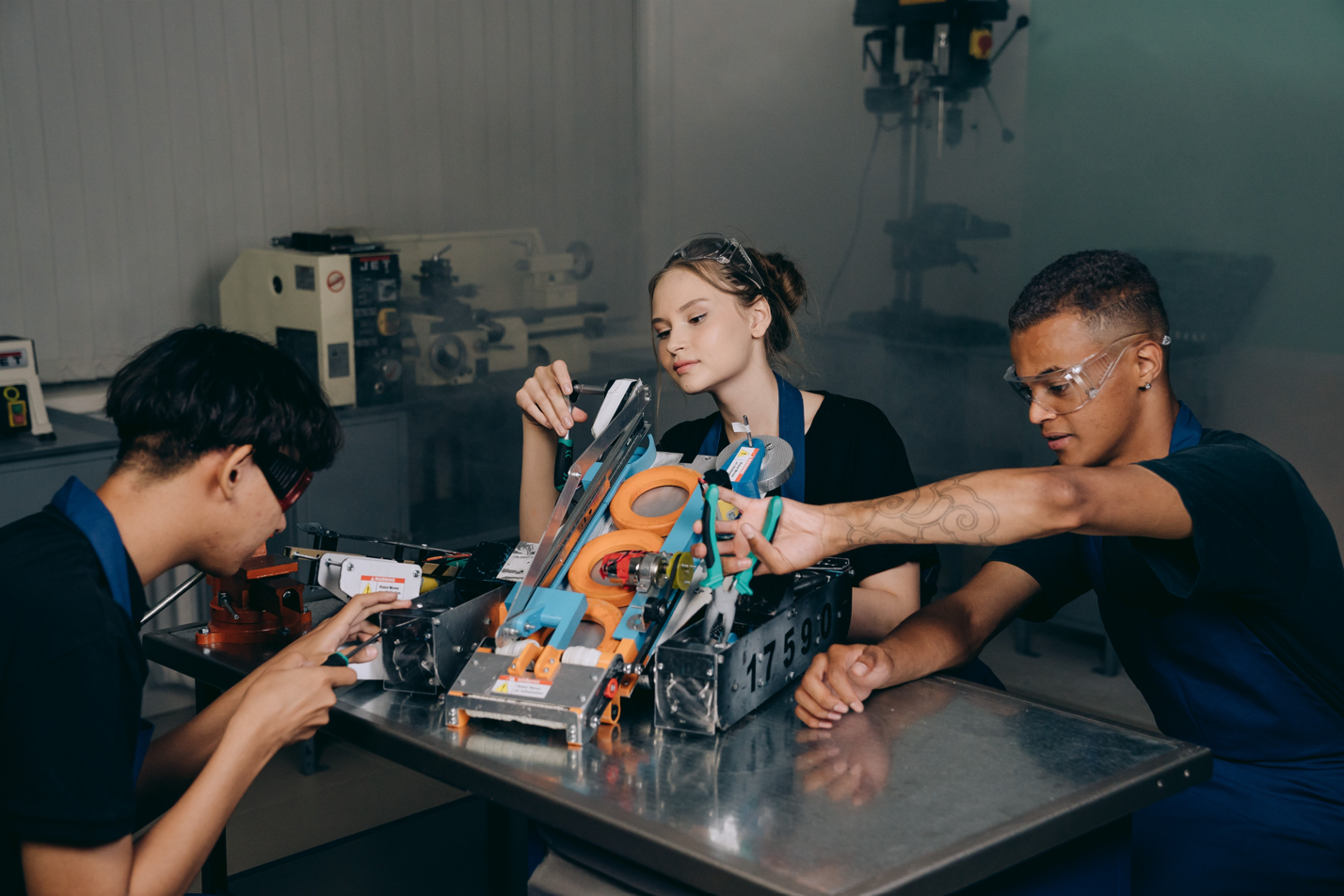 More difficult repairs are the responsibility of robotics engineers. They also do extensive analyses of diagnostic data to guarantee that everything is in working order.

Programming languages for robots don’t have a set standard. In actuality, any proprietary robotics system may have its own language. Projects involving AI or machine learning will almost probably be among the diverse programming jobs.

Robotics engineers must check for correct robot operation and assess a robot’s endurance by subjecting it to testing under a variety of demanding conditions. Testing can be carried out by completing actual inspections on functioning models or by utilizing CAD tools.

Depending on the organization they work for, the project they’re working on, and their position on a particular team, a robotics engineer’s day might look very different. However, robotics engineers engage in a lot of similar daily tasks.

Robotics engineers must develop and create the software for the robots in accordance with requirements, on schedule, and within budget before they can deploy the robots that will be their final products.

After that, thorough simulation testing follows: To evaluate the robot’s performance and appropriateness for the specified use case and identify any mistakes during the process, they gather and analyze test data. Test results must be clear in order to fulfill the project.

The three steps of a robotics engineer’s workflow—build, test, and deploy—can be separated out and are all repeatedly carried out.

The engineer develops, tests, and implements little portions of the robot’s capabilities at a time until the finished product is prepared for shipping.

Robotics engineers transition from designing and building to supporting workers when a project is completed. Debugging software, resolving bugs through communication with maintenance teams, and offering technical assistance for robotics software become their key duties.

A project’s maintenance is just as critical as its creation.

Where does a robotics engineer work?

In universities, there are several positions that carry out cutting-edge robotics research. Here are a few sectors where you can get employment in robotics engineering.

If you want to pursue a career in robotics engineering, you probably have personal reasons for doing so. However, if you are unsure, it is always helpful to carry out your own research and discover why it could be the best career choice for you.

Investigating the field’s benefits and drawbacks can help you do this. Some of the most popular and persuasive reasons to pursue a career in robotics engineering can be found in the list that follows.

Engineers that specialize in robotics deal with a wide variety of technology, objectives, and advances. The result is a variety of machines that can be utilized for a range of purposes in a range of industries.

You can assume that working in the robotics industry will expose you to a variety of challenges that necessitate creative solutions.

In the field of robotics technology, teamwork and collaboration are essential elements. Robotics engineers frequently work alongside a large group of individuals with a variety of professional backgrounds.

You will become more adept at collaborating with others and forming relationships with people whose skill sets can be similar to or dissimilar from your own.

Should you pursue a career as a robotics engineer in 2023?

Yes. Robotics engineers are needed more than ever since artificial intelligence is quickly gaining ground in every sphere of the industry.

Additionally, you’ll have the chance to use your creativity to make wearable robots, agricultural robots, and other things. Being a robotics engineer gives you the freedom to select your industry of employment and salary range.

Modern robotics engineering is one of the most varied and lucrative professions today.

Your decision to pursue this professional path will allow you to put your knowledge of mechanical, electrical, and software engineering to use while also advancing the automation revolution that is just getting started.

You will be creating, testing, and deploying robots at any given time, or you could be supporting a project that has already been put into production.

However, the actual benefit of a career in robotics engineering is the opportunity to get a wide range of useful skills in disciplines like project management and embedded software programming, among many others.