When army ant colonies are searching the forest for food or supplies, they frequently come across geographical gaps that individual ants cannot overcome.

So they construct bridges using themselves rather than twigs or leaves. Without a clear leader in charge, the insects somehow decide to join their bodies together to form a live bridge that allows some of the ants to pass and reach the object.

This is swarm intelligence, often known as swarm artificial intelligence. The phrase refers to the coordinated, decentralized collective behavior of biological or artificial agents that act in concert to accomplish objectives.

Honey bees use swarm intelligence when they send out “scout bees” to locate potential new colonies. When birds migrate to roosts and form flocks to search for food, they are the perfect example of it.

Additionally, fish use it to create schools, which gives them thousands of eyes instead of just two to watch out for predators. In other words, there is power and intelligence in numbers.

The discipline of swarm robotics, which tries to build groups of basic robots that work together in an autonomous manner to execute tasks that any one of the individual robots probably couldn’t accomplish on its own, is motivated by these collective animal behaviors.

Swarm robots can complete complicated tasks without being costly or very sophisticated.

Instead, basic directives like “advance toward a light source” might be assigned by algorithms to each individual robot. Then, via the robots’ interactions, sophisticated behaviors can develop.

But in other situations, robots have a harder time exhibiting these emergent characteristics.

This article will examine closely swarm robotics, including its characteristics, applications, and more.

What is Swarm Robotics?

Swarm robotics, to put it simply, is the use of many robots working together to solve problems by developing advantageous structures and behaviors like those seen in natural systems like swarms of bees, birds, or fish. 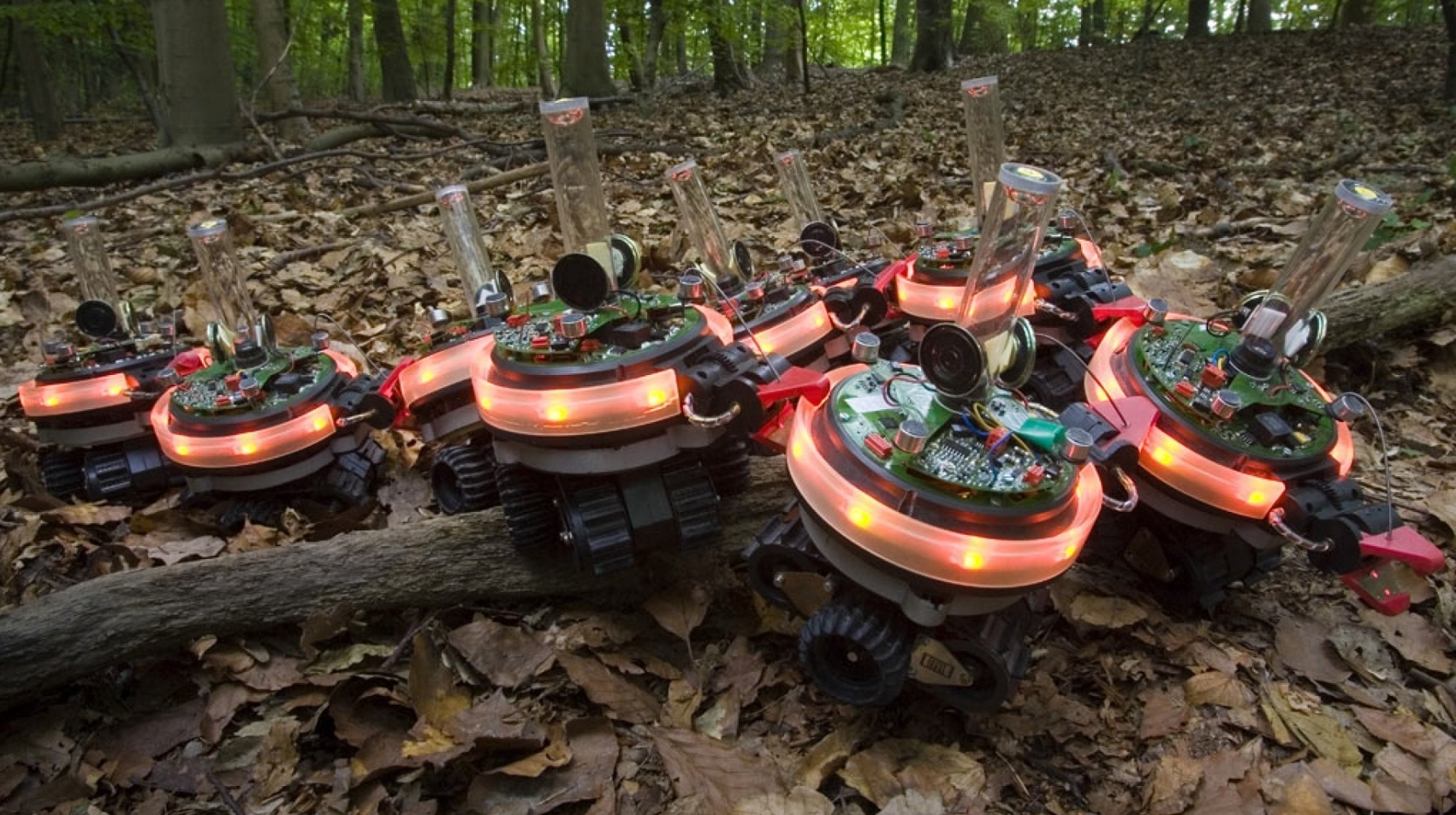 The ideas of swarm intelligence, or the collective behavior of decentralized, self-organized systems, are the foundation of the practical discipline of swarm robotics (natural or artificial).

Research on swarm intelligence is heavily influenced by biological systems seen in nature, such as ant colonies, fish schools, flocks of birds, etc.

These kinds of natural swarms contain individuals with very limited skills and little general understanding of the activity or the community.

However, researchers have shown that these swarms can exhibit very intricate and intelligent group behavior through local contact with their nearest neighbors and the associated transfer of information.

Swarm robotics incorporates these characteristics and revelations. The goal is to create robots that, on their own, have extremely basic structures and behaviors and are incapable of carrying out the required activity.

These straightforward robots, however, communicate and work together as a group or swarm to perform the required task, which results in the formation of complicated, practical swarm behavior.

Swarm robots are currently utilized in both military and exploratory activities. They may soon be present in sectors including mining and agriculture.

How do Swarm robots work?

Swarm robots often measure a lot less than standard autonomous robots (though not nearly as small as a nanobot).

For a task to be completed, a swarm of robots, which can range in size from a few dozen to over a thousand, must work together flawlessly.

This is accomplished using a type of organization known as “swarm intelligence,” which promotes a high level of flexibility in a system made up of many individuals yet controlled by none of them.

This is based on biological principles that are observed in herds of certain insects, animals, flocks of birds, and even schools of fish.

Swarm robots essentially attempt to mimic the abilities of these creatures to display a collective activity in response to external stimulation and in order to complete a task.

A high degree of machine redundancy allows a robotic swarm to operate in a similar manner, meaning that the loss of one or even a few robots won’t significantly affect the swarm’s ability to function as a whole.

Because of this, swarm robots are able to be extensively deployed to a range of situations and dynamically distribute themselves in order to complete a task despite the challenges placed in their path.

We’ll hopefully be able to resolve some of the most challenging issues facing us right now thanks to swarm robots. They can apply human creativity to almost any circumstance thanks to their capacity to scale and adapt to any environment.

For instance, there has been a lot of research into it as a potential strategy to support failing ecosystems in the face of climate change and other natural disasters.

Swarm robotics has the potential to be scaled up to produce synthetic bees and insects that might pollinate crops and other important plants to ensure their survival and avert a catastrophic catastrophe.

Tasks that need to be completed in huge or unstructured locations where there is no infrastructure that can be utilized to manage the robots, such as no accessible communication network or global localization system, are another possible application domain for swarm robotics.

Robot swarms might be used for these kinds of tasks since they can function independently without the aid of any infrastructure or outside coordination.

Underwater or extraterrestrial planetary exploration, monitoring, demining, and search and rescue are a few examples of jobs in unstructured and huge environments.

Additionally, it has been suggested that swarm robotics techniques might be used to almost entirely replace conventional forces.

In the form of autonomous drones, robots have already been widely used by several air forces across the world, and the US navy has experimented with robotic fleets that can react to threats instantly.

Fortunately, there are other, much more benign applications for this technology. The employment of swarm robots to manage a network of ground or airborne vehicles or to build a robust exploratory mission might pave the way for autonomous vehicles.

Making the swarm’s manufacturing process economically viable and developing a reliable approach for constructing the control algorithm for each member of the swarm are two of the key problems that must be overcome along the way.