The surge in demand for Artificial Intelligence has necessitated the hiring of an increasing number of engineers, researchers, and programmers. It is impossible to envisage existence without the impact or contribution of AI. AI is ubiquitous, from job searches to spam mail detection, ride sharing to social media connections, and it is making our lives better and easier.

AI can help your company save time and money by automating and improving regular procedures. Once AI is in place, you can be confident that those activities will be completed more quickly, accurately, and reliably than a person could. However, in order to incorporate AI into your company’s systems and services, you’ll need software developers who are capable of doing so.

Furthermore, those developers will need to be familiar with the finest AI languages. Every language has its own set of strengths and limitations, as well as distinct traits. It is up to you to determine which features are most appropriate for your needs.

Let’s get started and look at some of the top programming languages for AI.

Python is a high-level, interpreted, object-oriented programming language that emphasizes the ideals of code readability and simplicity. Right now, you may think of Python as the precursor of all other languages. Python’s simple syntax is responsible for its meteoric rise in popularity. Furthermore, the concise syntax allows you to spend considerably more time developing the fundamental structure, making Python an excellent choice for Machine Learning procedures.

Python’s user-friendliness is more important than anything else in making it the most preferred option among AI engineers. Nonetheless, it is a high-performance and extensively used programming language capable of complex procedures for a wide range of jobs and platforms.

In terms of current technology, the most crucial reason Python is usually at the top is that AI-specific frameworks were built for the language. TensorFlow, an open-source toolkit designed particularly for machine learning that can be used for deep neural network training and inference, is one of the most popular. Among the other AI-centric frameworks are:

C++ is a computer language extension that may be used to create neural networks. The speed of C++ is the most significant advantage since AI development requires complicated computations, and this language can speed up the calculations. It has low-level memory control and supports asset-compelled applications, performance-critical applications, and so on.

C++ has a complicated syntax but is less expensive than other languages such as Java. C++ may be used in artificial intelligence programming for search engine optimization and ranking.

One of the reasons for this is the language’s broad flexibility, which makes it ideal for resource-intensive applications. C++ is a low-level programming language that improves the management of the AI model in production. And, while C++ may not be the first option for AI programmers, it is worth noting that many deep and machine learning frameworks are developed in C++.

R is the most frequently used standard language, and it was designed primarily for statistical analysis and graphical data display. It is a popular programming language among data miners and statisticians. It is open-source and has a sizable AI community. R is notably effective for Artificial Intelligence research that incorporates time series analysis, statistical testing, linear and nonlinear modeling, and clustering.

The language is object-oriented, extendable, and allows objects to be manipulated by other languages. R’s efficiency in data processing and analysis is one of its most significant advantages. It also has excellent charting skills. R, on the other hand, is difficult to learn. It is sluggish and has security flaws.

The expanded packages should be considered more than the general capabilities of R. Packages like Gmodels, RODBC, OneR, and Tm provide extensive support for Machine Learning operations. Once you begin learning, you will see that statistics are the foundation of AI and ML. R’s open-source status indicates that it is free to use. It has a sizable user base.

The Java programming language is a high-level, general-purpose, object-oriented programming language. Java’s syntax is comparable to those of the C and C++ languages; however, Java is meant to be self-contained and has minimal dependencies. JAVA is arguably the most widely used language on the planet for a variety of activities, AI being one of them.

The existence of Virtual Machine Technology is the most significant advantage of utilizing the JAVA programming language. What exactly does JVM do? Well, the Java Virtual Machine simplifies the implementation process, saving you time and energy from compiling the application over and over again.

Big Data and AI are inextricably linked, and the most prominent Big Data frameworks, such as Fink, Hadoop, Hive, and Spark, were written in Java. It also provides a number of AI development frameworks, including Weka, Java-ML, H2O, DeepLearning4j, and MOA, OenNLP, Kubeflow, Deep Java library, Neuroph.

Scala is a programming language that is statically typed, high-level, object-oriented, and functional. It was created with the intention of reaping the benefits of Java while mitigating some of its flaws. Scala created a better method for building intelligent software using the Java Virtual Machine (JVM) environment. It is compatible with Java and JavaScript, and it makes development easier, quicker, and more productive

Scala has become an essential component of data analysis systems such as Apache Flink, Apache Spark, Apache Kafka, and Akka Stream as a result of these characteristics. Scala’s main drawbacks include a lack of community support, limited adoption, backward compatibility constraints, and a high learning curve.

Breeze is the most popular machine learning tool for Scala. This library combines Matlab’s functionality and Python’s NumPy library. It arose from the merger of the ScalaNLP and Scala projects. Breeze includes many of the computational capabilities required to create current AI systems. Julia is another high-end product that hasn’t gotten the recognition or community support it deserves. Nonetheless, its features do not disappoint. This programming language is helpful for a variety of jobs, but it excels at numbers and data analysis.

Julia is another high-end product that hasn’t gotten the recognition or community support it deserves. Nonetheless, its features do not disappoint. This programming language is helpful for a variety of jobs, but it excels at numbers and data analysis.

Julia provides DataFrames to deal with datasets and conduct typical data transformations for statistical analysis and data science. JuliaGraphs packages allow you to work with combinatorial data. Julia works well with databases using JDBC, ODBC, and Spark drivers. It is the ideal language for creating Deep Learning code on the backend. jl and Flux.jl is Julia-native, extremely strong tools for Machine Learning and Artificial Intelligence. 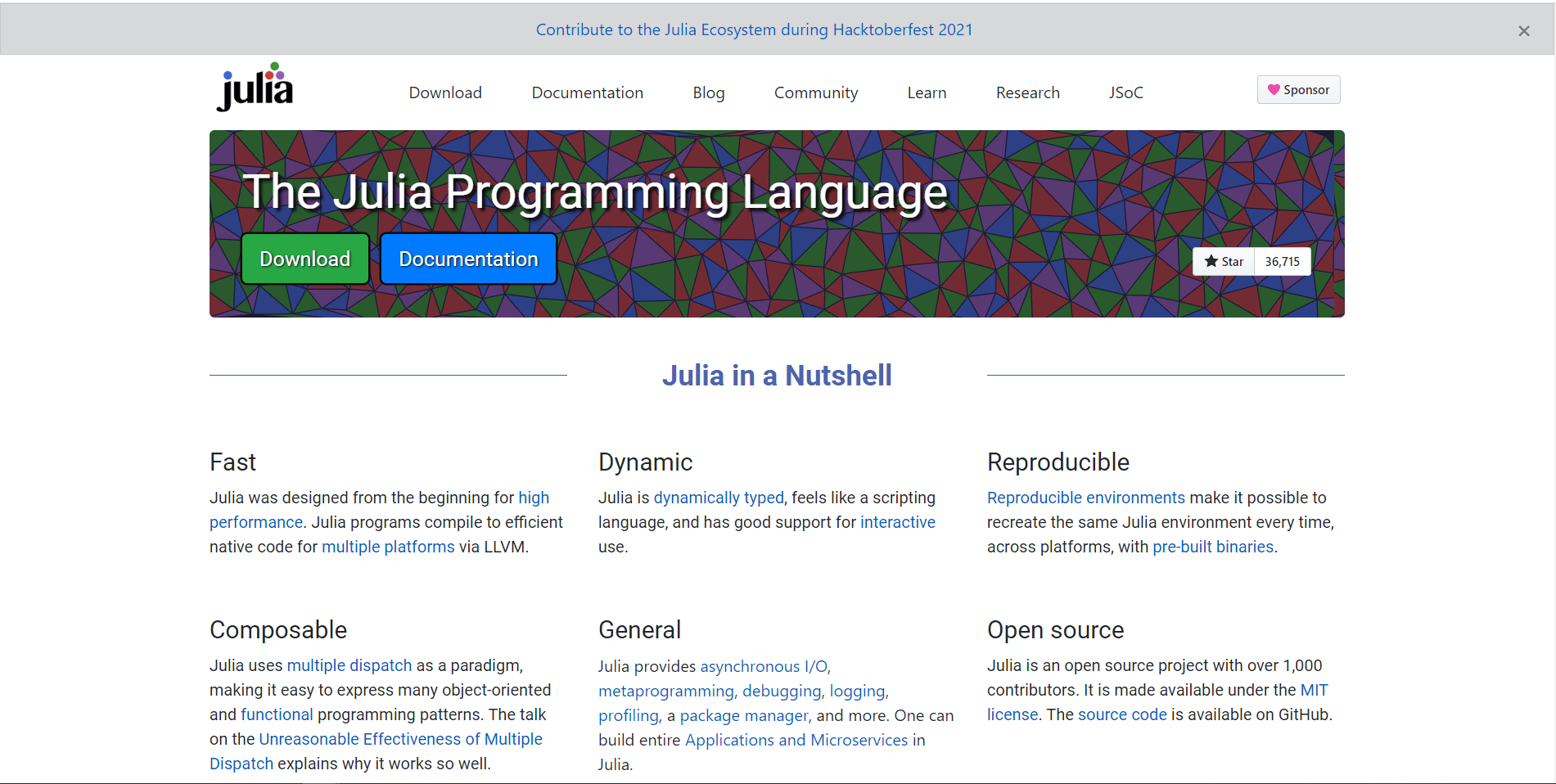 Rust is a multi-paradigm programming language that prioritizes speed, safety, and concurrency. Rust has a syntax comparable to C++, although it is significantly more memory-safe. Null pointers, dangling pointers, and data races are not permitted. Memory and other resources are handled using a specialized method that offers predictable management with little overhead, rather than through automatic garbage collection.

Rust is a challenging language to learn since it needs an understanding of object-oriented programming ideas. It has a sluggish compiler and huge binary files as a result. There are just a few machine learning libraries developed expressly in Rust. However, numerous bindings to common machine learning frameworks, such as PyTorch or TensorFlow, are available to developers.

Since the 1960s, Lisp has been widely utilized for scientific study in the disciplines of natural languages, theorem proofs, and the solution of Artificial Intelligence issues. Lisp was originally designed as a practical mathematical language for programming, but it quickly became a popular option among AI developers.

More significantly, the creator of Lisp (John McCarthy) was a major figure in the field of AI, and much of his work had been implemented for a long period.

The primary motivation for developing Lisp was to establish a viable mathematical representation in code. Because of this intrinsic advantage, it quickly became the language of choice for AI research. Many computer science concepts, such as recursion, tree data structures, and dynamic typing, were invented in Lisp.

Lisp is incredibly efficient and enables very quick program execution. Lisp programs are smaller, faster to design, perform faster, and are easier to maintain than C++ or Java applications. Prolog, one of the earliest programming languages, is a sophisticated framework that works with three elements: facts, rules, and objectives. A developer must identify all three pieces before Prolog may construct relationships between them in order to achieve a specific conclusion by examining facts and rules.

Prolog is capable of understanding and matching patterns, finding and structuring data logically, and automatically backtracking a process to discover a better path. Overall, the best application of this language in AI is for problem-solving, where Prolog looks for a solution—or several.

As a result, it is used in chatbots and virtual assistants such as IBM’s Watson. Prolog may not be as diverse or simple to use as Python or Java, yet it may be quite useful. Prolog has been used to develop a number of AI libraries. Zamia-AI, for example, is a framework that provides components and tools for the development of open-source speech and natural language processing systems.

Integrating AI software into an already varied business environment necessitates the use of a range of programming tools, such as several languages, frameworks, and libraries. These technologies frequently demand extraordinary degrees of competence and expertise.

All of the languages mentioned above are excellent choices for Artificial Intelligence projects. It’s simply a matter of selecting the ideal project for your needs. With a basic grasp of the project, you can select the most appropriate language and increase your company’s efficiency. Good luck with your next AI project!