Artificial Intelligence (AI) was originally thought to be a faraway dream, a technology for the future, but that is no longer the case.

What was once a research topic is now exploding in the real world. AI is now found in a variety of places, including your workplace, school, banking, hospitals, and even your phone.

They’re the eyes of self-driving vehicles, Siri’s and Alexa’s voices, the minds behind weather forecasting, the hands behind robotic-assisted surgery, and more.

Artificial intelligence (AI) is becoming a commonplace feature of modern life. In the last several years, AI has emerged as a major player in a wide range of IT technologies.

Finally, the neural network is used by AI to learn new things.

So today we will learn about Neural Networks, how it works, their types, applications, and a lot more.

What is Neural Network?

In machine learning, a neural network is a software-programmed network of artificial neurons. It tries to imitate the human brain by having numerous layers of “neurons,” which are similar to the neurons in our brain.

The first layer of neurons will accept photos, video, sound, text, and other inputs. This data flows through all of the levels, with one layer’s output flowing into the next. This is critical for the most difficult tasks, such as natural language processing for machine learning.

However, in other cases, aiming for system compression to reduce model size while maintaining accuracy and efficiency is preferable. Pruning a neural network is a compression method that includes removing weights from a learned model. Consider an artificial intelligence neural network that has been trained to distinguish people from animals. 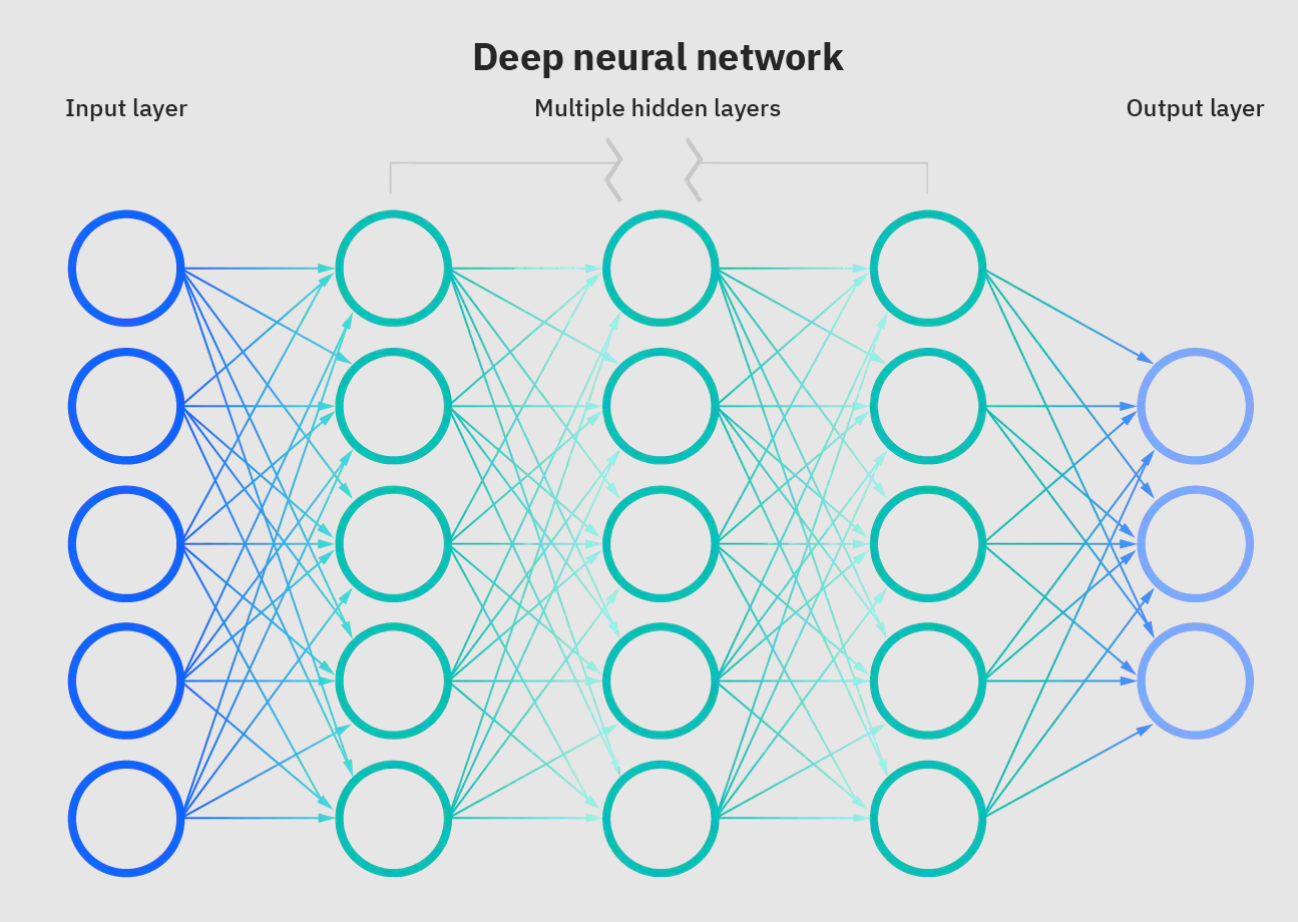 The picture will be divided into bright and dark parts by the first layer of neurons. This data will be passed into the following layer, which will determine where the edges are.

The next layer will try to recognize the forms that the edges’ combination has generated. According to the data it was trained on, the data will pass through numerous layers in a similar manner to determine if the image you presented is of a human or an animal.

When data is given into a neural network, it begins to process it. After then, the data is processed via its levels to get the desired result. A neural network is a machine that learns from structured input and displays the results. There are three types of learning that can take place in neural networks:

How do Neural networks work?

Artificial neurons are used in neural networks, which are sophisticated systems. The artificial neurons, also known as perceptrons, are made up of the following components:

Data in the form of a numeric value is sent to the input layer. The network’s hidden layers are the ones that do the most calculations. The output layer, last but not least, forecasts the result. Neurons dominate one another in a neural network. Neurons are used to construct each layer. Data is routed to the hidden layer after the input layer gets it.

Weights are applied to each input. Within the hidden layers of a neural network, the weight is a value that translates incoming data. Weights function by multiplying input data by the weight value in the input layer.

It then starts the first hidden layer’s value. The input data is transformed and passed to the other layer via the hidden layers. The output layer is responsible for generating the final result. The inputs and weights are multiplied, and the result is delivered to the hidden layer neurons as a sum. Each neuron is given a bias. To calculate the total, each neuron adds the inputs it receives. 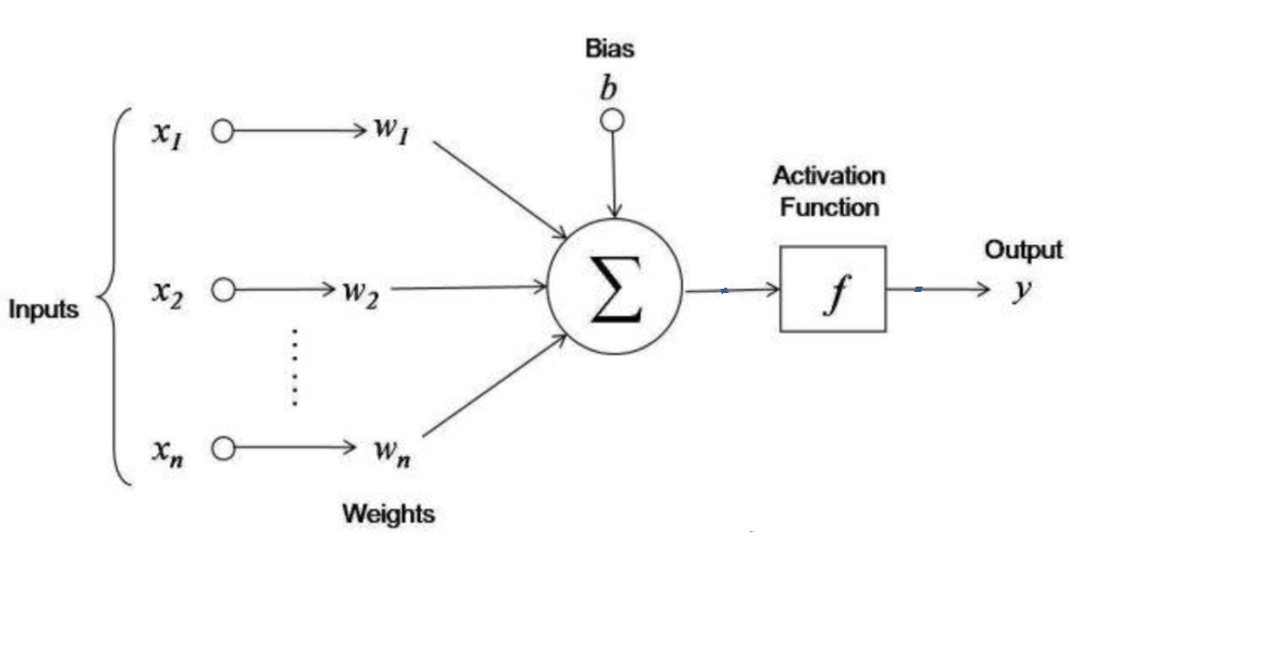 After that, the value passes via the activation function. The result of the activation function determines whether or not a neuron is activated. When a neuron is active, it sends information to the other layers. The data is created in the network till the neuron reaches the output layer using this method. Forward propagation is another term for this.

The outcome is projected by the neuron in the output layer with the highest probability. Backpropagation occurs when the output is incorrect. Weights are initialized to each input while creating a neural network. Backpropagation is the process of readjusting the weights of each input to reduce mistakes and provide a more accurate output.

The Minsky-Papert perceptron model is one of the simplest and oldest neuron models. It is the smallest unit of a neural network that performs certain calculations in order to discover characteristics or business intelligence in incoming data. It takes weighted inputs and applies the activation function to get the final result. TLU (threshold logic unit) is another name for perceptron.

Perceptron is a binary classifier that is a supervised learning system that divides data into two groups. Logic Gates such as AND, OR, and NAND can be implemented with perceptrons.

The most basic version of neural networks, in which input data flows exclusively in one direction, passes via artificial neural nodes and exiting through output nodes. Input and output layers are present in places where hidden layers may or may not be present. They can be characterized as either a single-layered or multi-layered feed-forward neural network based on this. 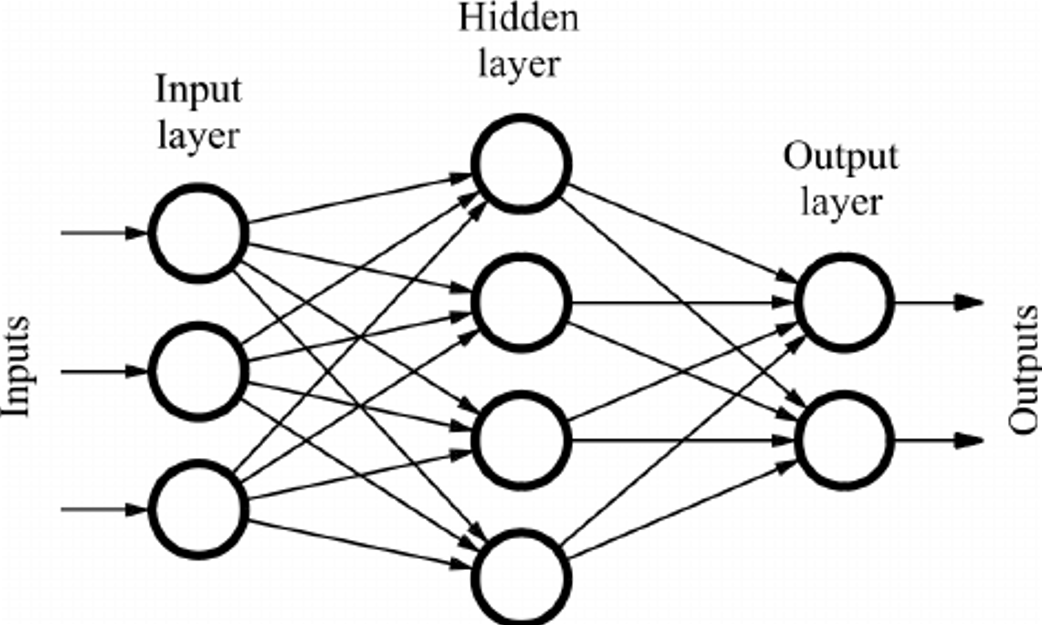 An introduction to sophisticated neural nets, in which input data is routed via many layers of artificial neurons. It is a completely linked neural network, since every node is connected to all neurons in the following layer. Multiple hidden layers, i.e., at least three or more layers, are present in the input and output layers. It possesses bidirectional propagation, which means it can propagate both forward and backward. Inputs are multiplied by weights and sent to the activation function, where they are changed via backpropagation to minimize the loss.

Weights are machine-learned values from Neural Networks, to put it simply. Depending on the disparity between expected outputs and training inputs, they self-adjust. Softmax is used as an output layer activation function after nonlinear activation functions.

The network understands pictures in sections and can perform these actions numerous times to finish the entire image processing. 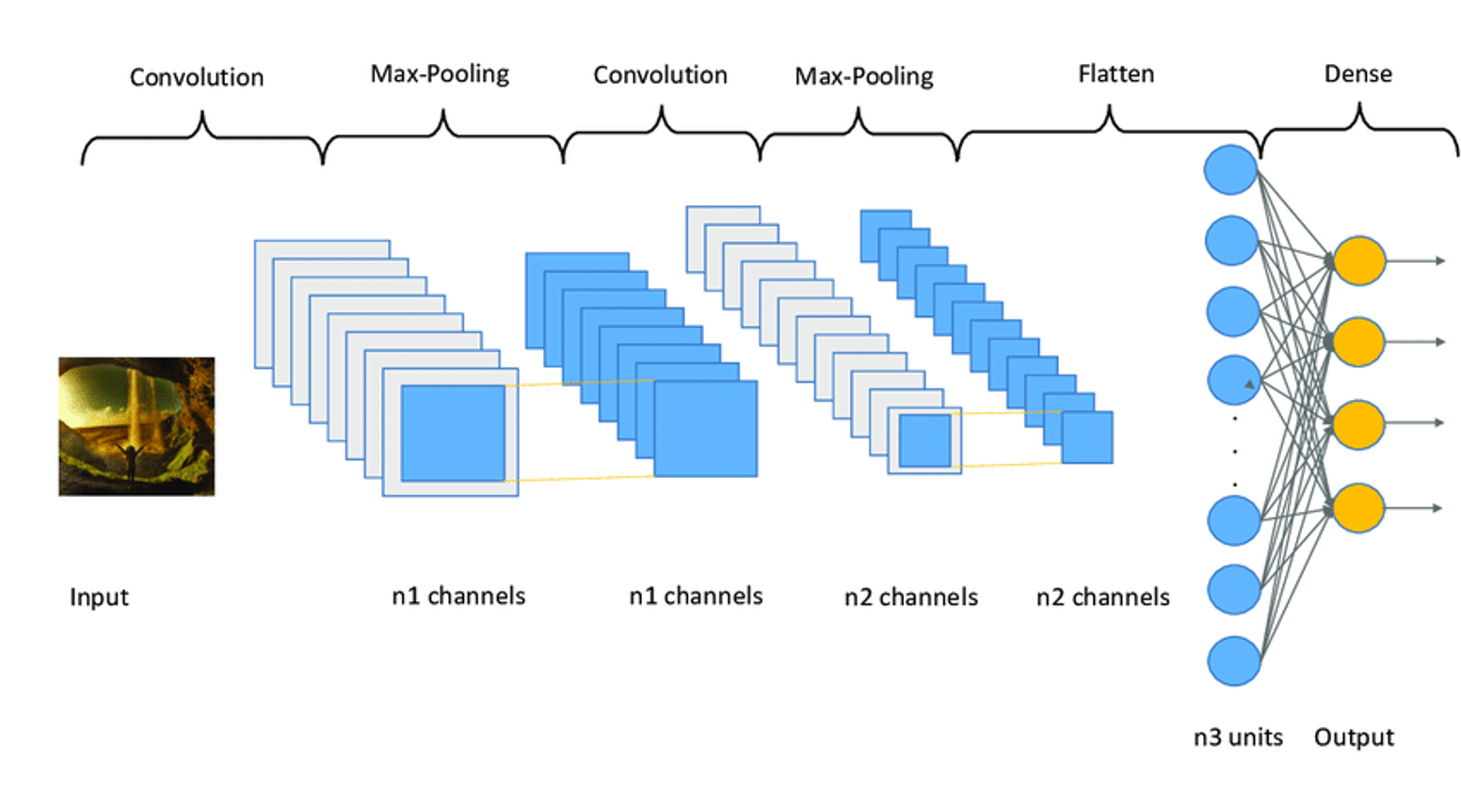 The picture is converted from RGB or HSI to greyscale during processing. Further variations in pixel value will aid in detecting edges, and pictures can be sorted into several groups. Unidirectional propagation occurs when a CNN contains one or more convolutional layers followed by pooling, and bidirectional propagation occurs when the output of the convolution layer is sent to a fully connected neural network for image classification.

To extract certain elements of an image, filters are utilized. In MLP, the inputs are weighted and supplied into the activation function. RELU is used in convolution, while MLP employs a nonlinear activation function followed by softmax. In picture and video recognition, semantic parsing, and paraphrase detection, convolutional neural networks produce excellent results.

An input vector is followed by a layer of RBF neurons and an output layer with one node for each category in a Radial Basis Function Network. The input is classified by comparing it against data points from the training set, where each neuron maintains a prototype. This is one of the training set’s examples.

Each neuron calculates the Euclidean distance between the input and its prototype when a fresh input vector [the n-dimensional vector you are trying to categorize] has to be classed. If we have two classes, Class A and Class B, the new input to be categorized is more similar to class A prototypes than class B prototypes.

As a result, it might be labeled or categorized as class A.

Recurrent Neural Networks are designed to save a layer’s output and then feed it back into the input to assist forecast the layer’s outcome. A feed-forward neural network is usually the initial layer, followed by a recurrent neural network layer, where a memory function remembers part of the information it had in the previous time step. 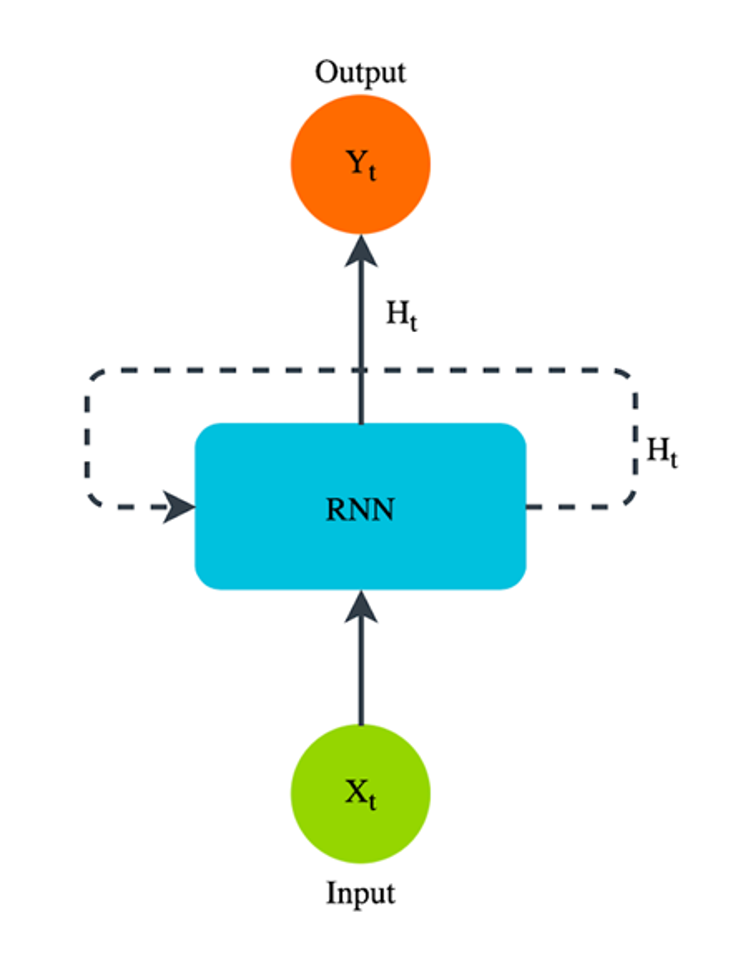 This scenario uses forward propagation. It saves data that will be needed in the future. In the event that the prediction is incorrect, the learning rate is used to make minor adjustments. As a result, as the backpropagation progresses, it will become increasingly accurate.

Neural networks are used to handle data problems in a variety of disciplines; some examples are shown below.

The field of neural networks is rapidly expanding. It is critical to learn and comprehend the concepts in this sector in order to be able to deal with them.

The many types of neural networks have been covered in this article. You can use neural networks to tackle data problems in other fields if you learn more about this discipline.