The Basic Structure of The C++

A series of instructions or assertions is referred to as a program. The structure of a C++ program is made up of these statements.  It is possible to create high-performance apps using the general-purpose programming language C++.

Classes, objects, methods, and instance variables are only a few of the tools that may be used to write C++ code.

To provide the characteristics of the object-oriented programming paradigm, C++ programming is based upon C.

Despite supporting many features, C++ is not a completely object-oriented programming language.

Real-world entities are thought of as objects in object-oriented programming. The development and maintenance of the code are made simple.

The object-oriented features of C++ make it simple to build and design sophisticated code.

Thus, this post will enable us to have a thorough understanding of the C++ program structure.

A C++ program is organized in a unique and distinctive way. A program in C++ is split into the following three parts:

Let’s examine the Hello World program’s implementation as an example:

A program often contains a variety of programming constructs, including built-in functions, classes, keywords, constants, operators, and more that are predefined in the standard C++ library.

A suitable header must be provided in the application in order to use such pre-defined components. Additionally, the standard headers provide details like the data type of constants, the prototype, definition, and return type of library functions, among other things.

A special preprocessor instruction known as #include copies and pastes the full file’s text supplied within angle brackets into the source code.

Input-output streams are abbreviated as “iostream” and are a standard file that must be included with the C++ compiler. The user input and display codes are contained in this command.

The C++ Standards Committee has made several improvements to C++ since the language’s inception. An analogous new feature of this language is Namespace.

It enables the combining of several things under a single name, including classes, objects, functions, and other C++ tokens.

Separate namespaces can be formed by various users. They can employ names for the entities that are similar as a result.

By doing this, the compile-time error brought on by name-identical conflicts will be avoided.

The standard library’s entities have been reorganized by the C++ Standards Committee under the namespace std.

To all of the names in a certain set, the namespace is a prefix that is used. In this application, two names—cout and endl—are defined in the iostream file.

All instructions included in the opening and closing curly braces” that surround the main body of the code are executed by the compiler ( ).

The program is terminated and a value is returned to the operating system as soon as all of the instructions in main () have been completed.

In C++, main () typically gives the operating system an int value. Consequently, the return 0 statement must come at the end of the main (). Return values of 0 and non-zero indicate success and failure, respectively.

{ indicates the beginning of a block of code and } denotes its ending.

When your software is run by the computer, the operating system calls this function.

Character output is referred to by the acronym cout, which shows whatever is included between the << brackets.

When combined with the keyword cout, symbols << can act like functions as well.

The program is instructed to return a value to the function int main using the return keyword.

The operating system component that began this application regains control of execution after the return statement.

The code stops running at this point.

The compiler ignores the first three lines of the above program since they are comments. A program contains comments to make it more readable.

If a comment is small enough to fit on a single line, it is preceded by a double slash sequence in the program’s initial line.

If a comment has several lines, they are separated by the characters /* and */. 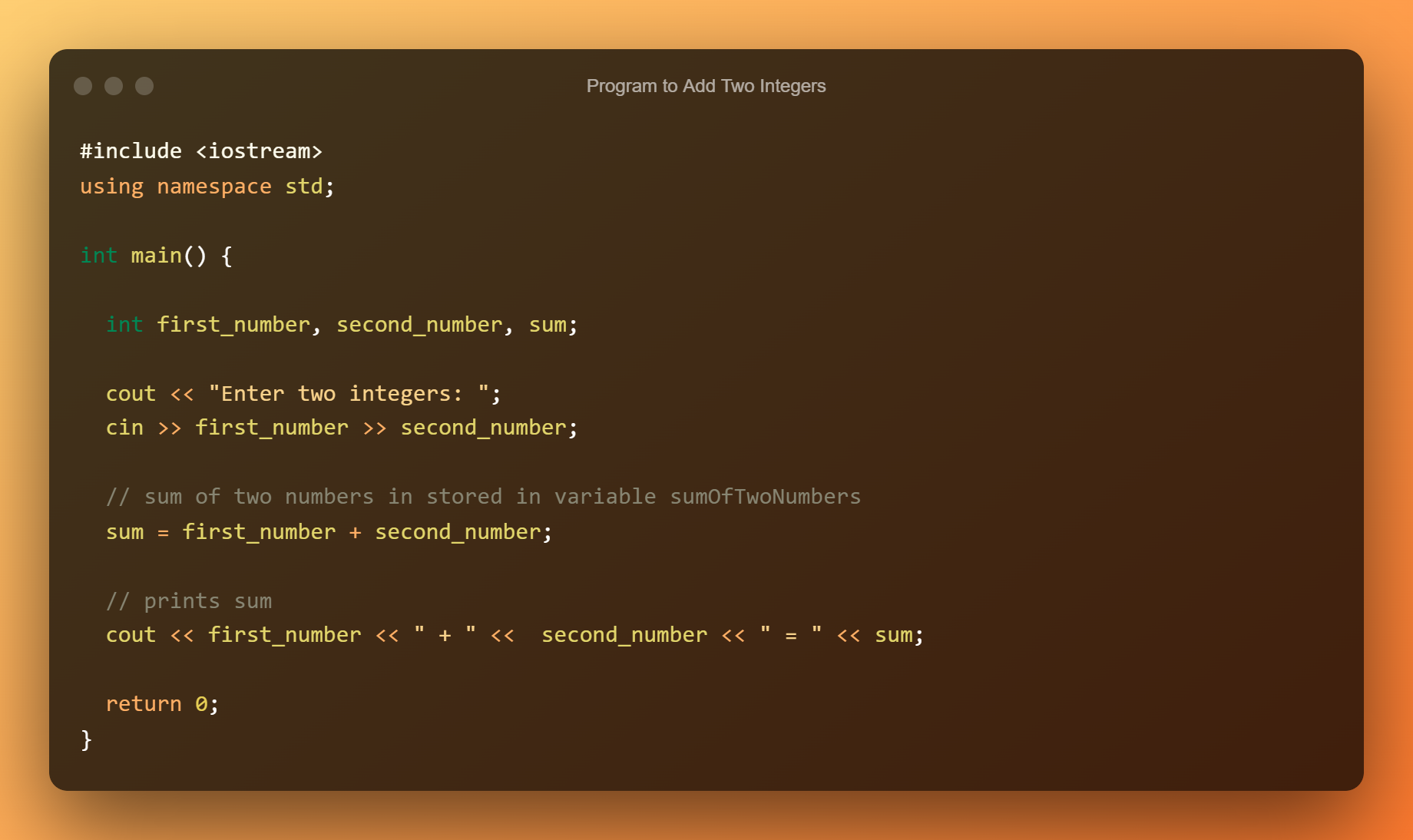 Here is a straightforward C++ program that will allow you to add two numbers and fully grasp their structure.