Object-Oriented Programming in Python for Beginners

It deals with defining objects and classes in Python, which forms the basis for OOPs principles. In this tutorial on “object-oriented programming in Python,” you will learn how to declare Python classes, create objects from them, and use the four OOPs techniques.

What Is Object-Oriented Programming?

The main focus of object-oriented programming (OOP) is the creation of “objects”. A collection of interconnected variables and functions makes up an object. 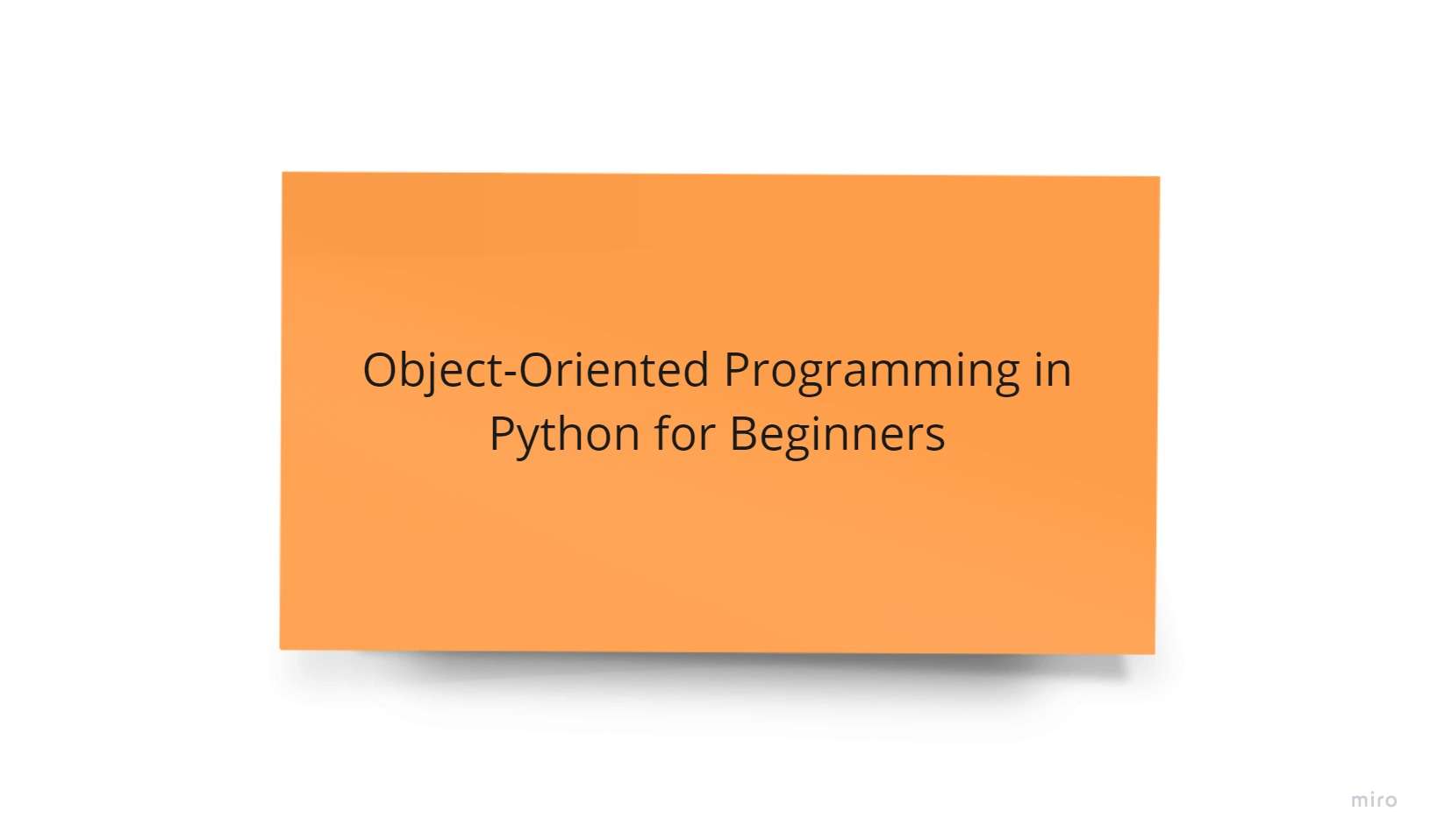 If the automobile were an item, its attributes would include things like its color, model, price, brand, etc. Additionally, it would accelerate, slow down, and change gears.

Another illustration: If we think of a dog as an item, then some of its characteristics might be color, breed, name, weight, etc. And he would be moving about, barking, playing, etc.

Because it incorporates real-world concepts like objects, hiding, inheritance, etc. into programming, object-oriented programming is well known. Because it is so similar to real-world circumstances, visualization is made simpler.

Like all other object-oriented languages, Python enables you to design classes to generate objects. The most popular data types in Python, including strings, lists, dictionaries, and other objects, are built-in classes.

A class is a group of linked methods and instance variables that define a certain kind of object. A class may be seen as the model or template for an object. The variables that make up a class are known as attributes.

An object is a member of a class that has a defined set of attributes. Because of this, any number of objects can be created using the same class.

Python classes are defined using the word class, which is then followed by the class name and a colon. An illustration of a parrot class might be:

Here, we declare the empty class Parrot using the class keyword. We create instances from classes. An instance is a particular object that was made from a certain class. ‘pass’ is frequently used as a stand-in for code whose implementation we may forego for the moment. We can execute the Python code without raising an error by using the “pass” keyword.

An instantiation of a class results in an object (instance). Only the object’s description is defined when a class is created. As a result, no storage or RAM is allocated.

An example of a parrot class object is:

Obj is a Parrot-class object in this instance.

Let’s say we know specifics about parrots. We will now demonstrate how to create the parrot class and its objects.

A method called init defines the attributes that every Parrot object must have (). When a new Parrot object is formed, the function __init__ creates the object’s initial state by assigning the values we supply within the object’s properties.

So, each new instance of the class is initialized by using __init__(). Although __init__() can accept any number of parameters, self is always the first parameter.

A reference to the active class instance is included in the self-argument. The self parameter, which links to the address of the current object of a class and gives us access to its (the object’s) variables’ data, signifies that. 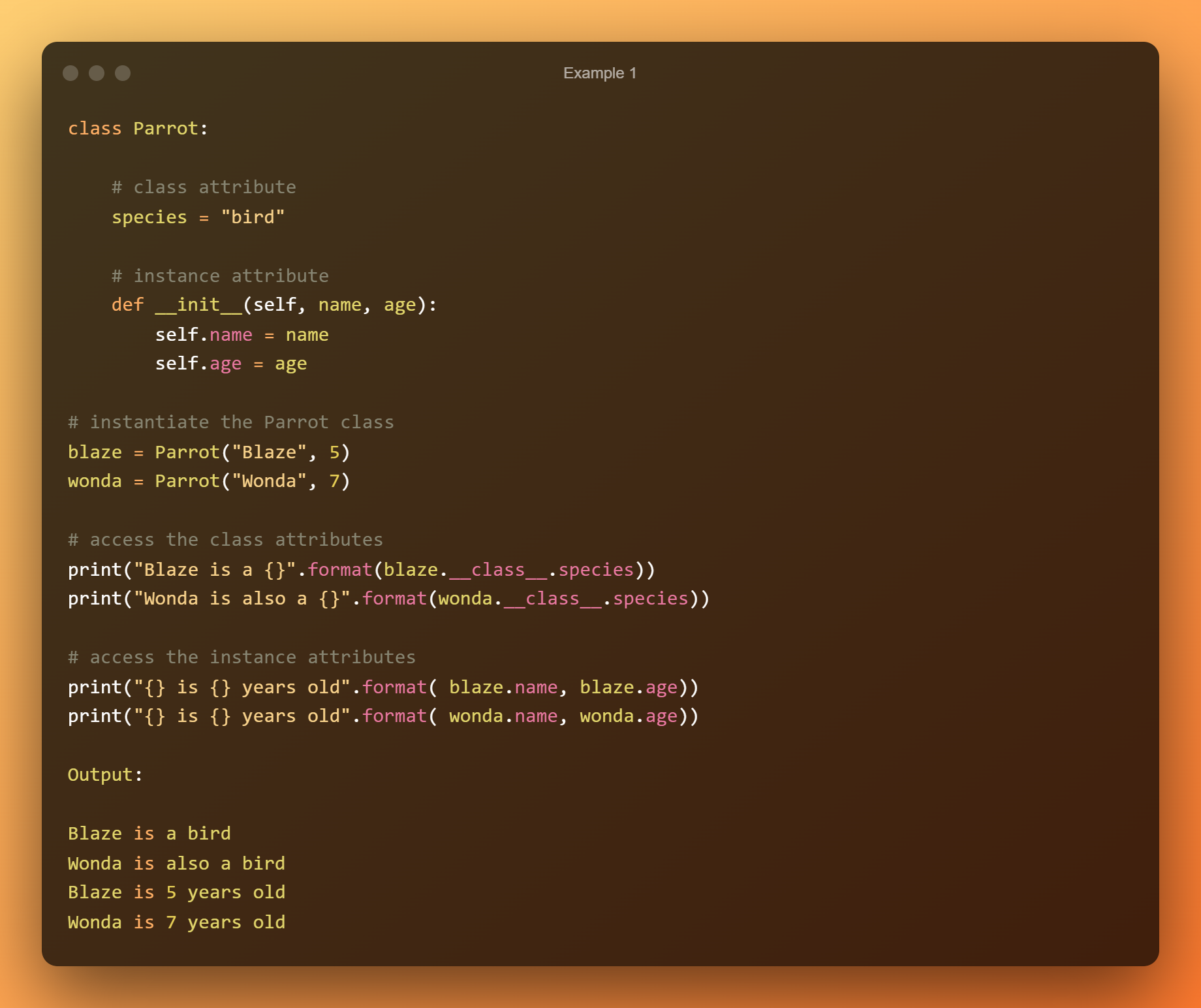 When an object is formed, the initializer method is the one that is called initially. Then, instances of the Parrot class are created. Blaze and Wonda in this instance are references (values) to our new objects. __class .species allows us to access the class attribute. 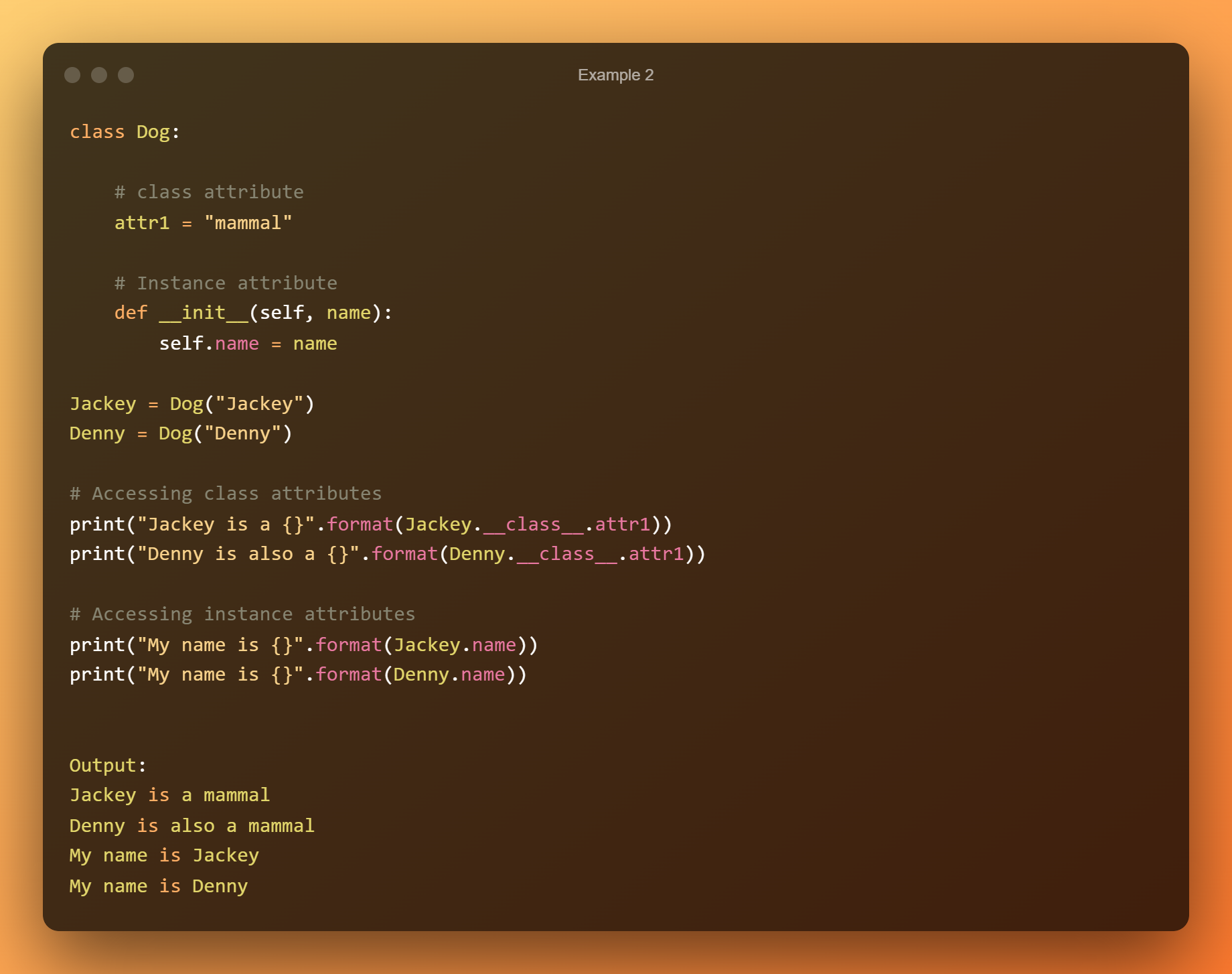 Functions defined inside a class’s body are called methods. They are employed to specify how an item will behave. 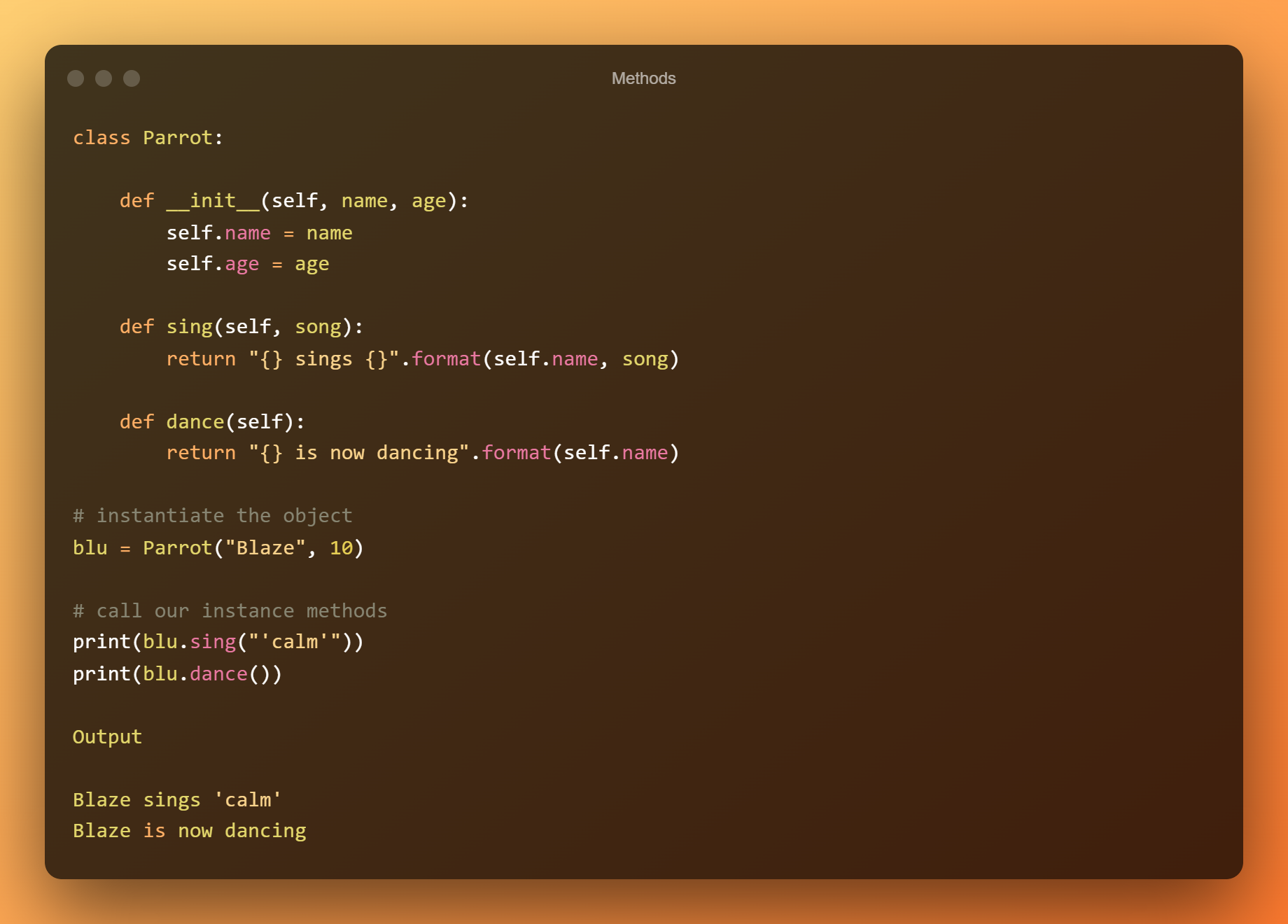 Two methods, sing() and dance, are defined in the aforementioned application (). Because they are invoked on an instance object, such as flame, these are referred to as instance methods.

Fundaments of the OOPS concept

The four core ideas of object-oriented programming are:

It’s possible that you’ve also observed that you share a few characteristics with your parents. The real-world situation is fairly similar to inheritance as well.

However, in this case, the “parent classes”‘ characteristics are passed down to the “child classes.” These aspects are referred to as “properties” and “methods” in this context.

A class can derive its methods and attributes from another class by using the technique known as inheritance. Inheritance is the process of a child class receiving the properties of a parent class. 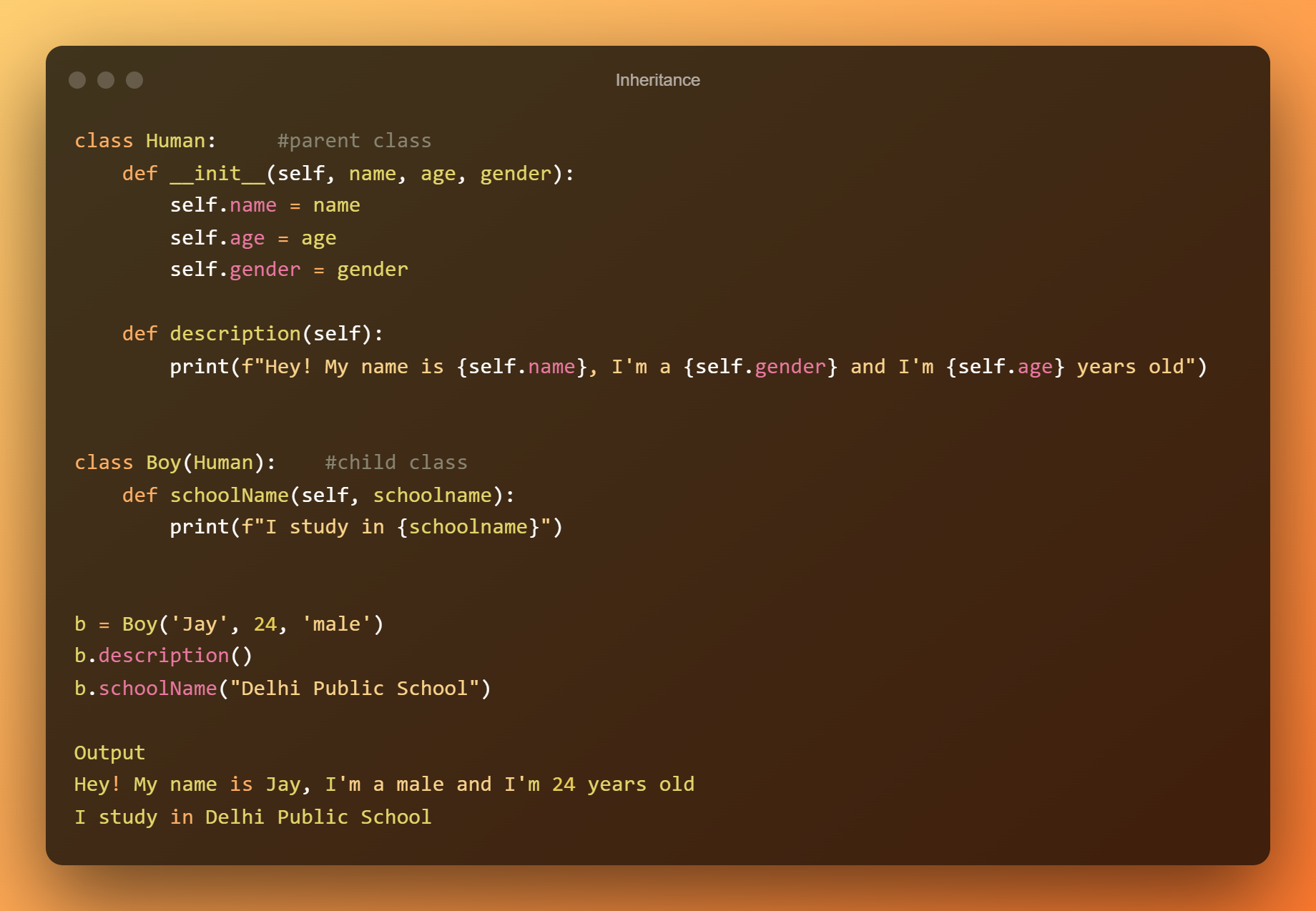 The parent class Human is inherited by the child class Boy in the example above. Because Boy is inheriting from Human, we can access all of its methods and attributes when we create an instance of the Boy class.

Giving every variable in the program global access is not a wise move when working with classes and handling sensitive data.

Without giving the program complete access to any of those variables, encapsulation provides a mechanism for us to obtain the necessary variables.

Methods that are defined explicitly for the purpose can be used to update, edit, or delete data from variables. This method of programming has the advantages of enhanced security and control over the data input.

See how quickly variables can be accessible in the demonstration below: 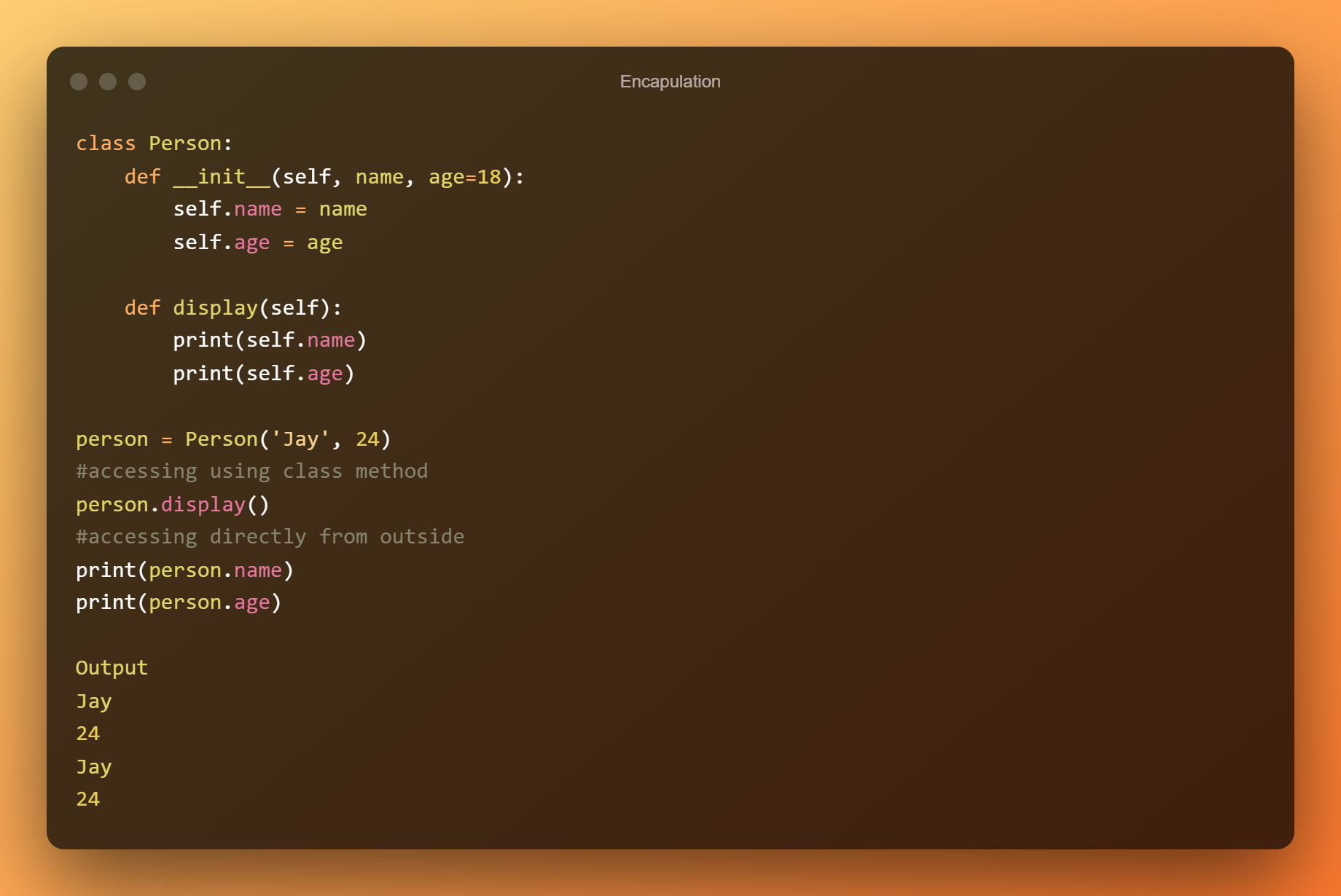 Let’s say you are using your phone to browse the Instagram feeds. When you got the urge to listen to some music, you accessed Spotify and began playing your favorite song.

After a time, you received a call, so you paused whatever you were doing in the background to answer it. Your friend called and requested that you text them a certain person’s phone number.

So you sent him the phone number through SMS and carried on with your tasks. Have you picked up on anything? With just one device—your mobile phone—you could surf through feeds, listen to music, take and make phone calls, and message.

Or “something” that, depending on the circumstance, can exhibit a variety of behaviors. In OOPS, polymorphism describes functions with the same names but distinct behaviors. Alternatively, a different function signature with the same function name (parameters passed to the function). You most likely use a laptop, phone, or tablet to read this content. While reading it, you are also presumably taking notes, underlining key passages, and perhaps storing some information in your personal files.

All you can see when you read this is a “screen” with the data that is being displayed to you. You just see the keyboard’s keys as you type, so you don’t have to worry about internal subtleties like how pushing a key can cause that word to appear onscreen.

Alternatively, how pressing a button on your screen can launch a new tab.

Therefore, whatever we can observe in this situation is abstract. We can only see the outcome it is creating and not the inside intricacies (which actually matter to us).

Similar to this, abstraction only reveals the functions that everything possesses while concealing any implementations or internal details.

Abstraction’s major objective is to conceal background information and any extraneous data implementation so that people only see what they need to see. It aids in managing the code’s complexity. 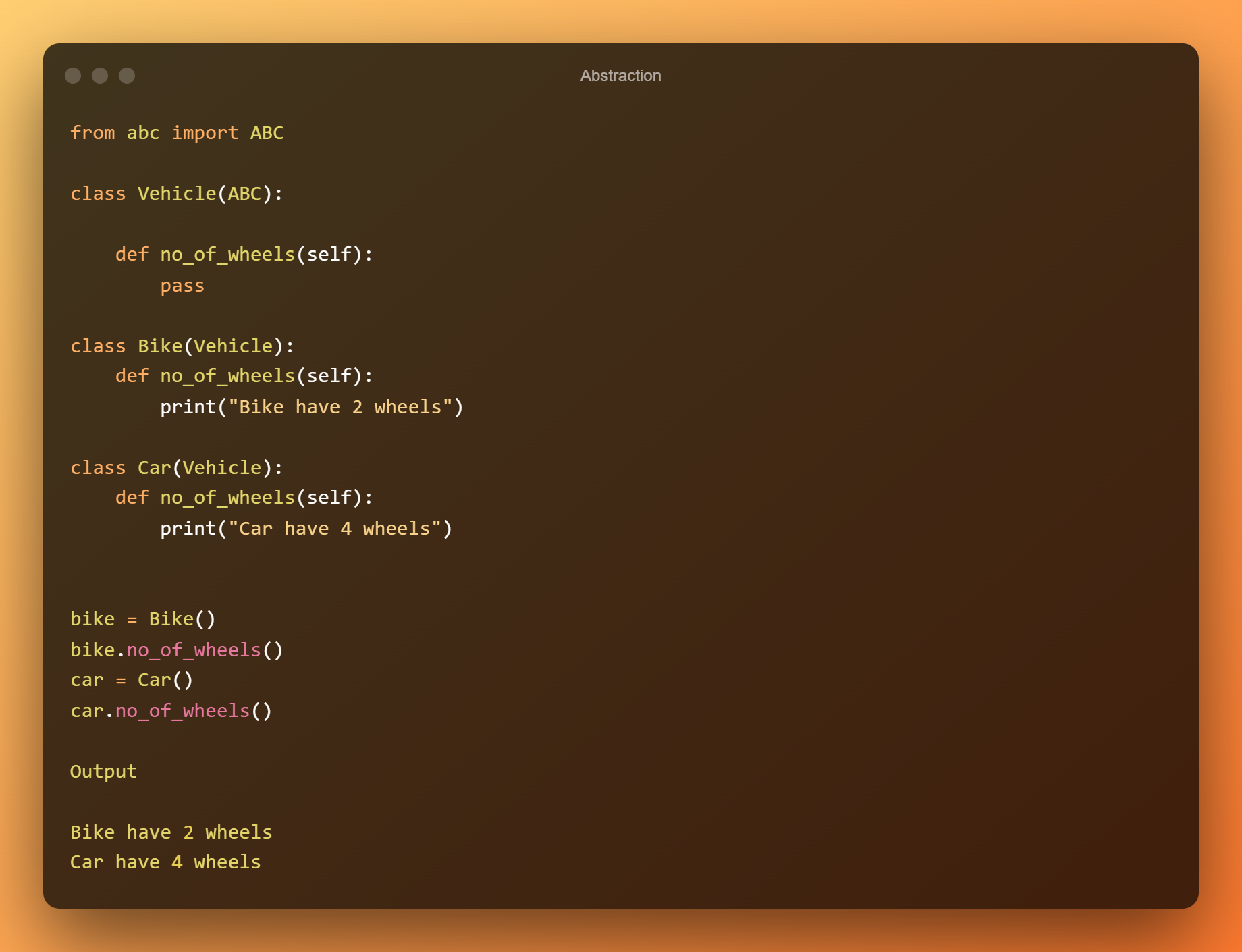 They anticipate the classes that inherit the abstract classes to give the method’s implementation.

In conclusion, we learned about OOPS ideas in Python, the hottest programming paradigm right now.

After reading this, you must have realized that the OOPS paradigm entirely deals with the idea of classes and objects. and OOPS concepts such as encapsulation, polymorphism, inheritance, and abstraction.