Every web development team undertakes a set of tests on its products, yet the web solution that is given later has flaws.

Even with the finest manual testing, defects inevitably creep in and reemerge, despite the efforts of the QA team to catch them before the first release.

When it comes to increasing the efficiency and scope of your software testing, automated web testing is your best choice.

For online testing, the Python programming language offers a robot framework that can leverage external libraries such as selenium.

In this post, we’ll go through test cases and other terms connected to the Python robot framework.

What is a robot framework?

In simple words, it is a Python-based keyword-driven test automation framework.

It enables testers to automate and maintain complicated process scripts efficiently. The framework can be used to test user interfaces and application programming interfaces.

It allows test engineers to utilize Selenium in addition to numerous other integrations. Selenium is an industry-standard tool for automating user behavior and scripting user-based web browser interactions for any website.

What is acceptance testing?

What is robotic process automation?

RPA, or robotic process automation, is a method of minimizing human labor via using software that incorporates machine learning and AI capabilities. RPA is used to automate high-level, repetitive processes.

What is acceptance test-driven development?

Acceptance test-driven development, often known as ATDD, is a development technique that relies on communication between business customers, developers, and testers. They collaborate and conduct acceptance testing before deploying the feature.

Robot Framework is a framework that is application and technology agnostic. Its architecture is very modular, as seen in the picture below.

The test data is presented in a simple, editable tabular format. Robot Framework analyzes data, conducts test cases, and creates logs and reports when it is started.

The core framework has no knowledge of the target under test, and libraries manage all interactions with it. Libraries can leverage lower-level test tools as drivers or directly employ application interfaces.

The pip package is suggested for installing the robot framework in Python. To install the framework, run the following command.

You should be able to view both the interpreter and robot framework versions after a successful installation using the -version option.

In a robot framework, there are primarily four built-in tools that are used:

Instead of automated test cases, test cases in the robot framework can be written in basic English. The following tests can be used to classify the test scenarios.

The robot framework’s test cases are frequently written in tabular syntax. A test case table’s first column contains the test names, and the test case begins with anything in the column and ends with the next test case name or the table’s end.

Let’s take a look at a real-world example to understand how this works. 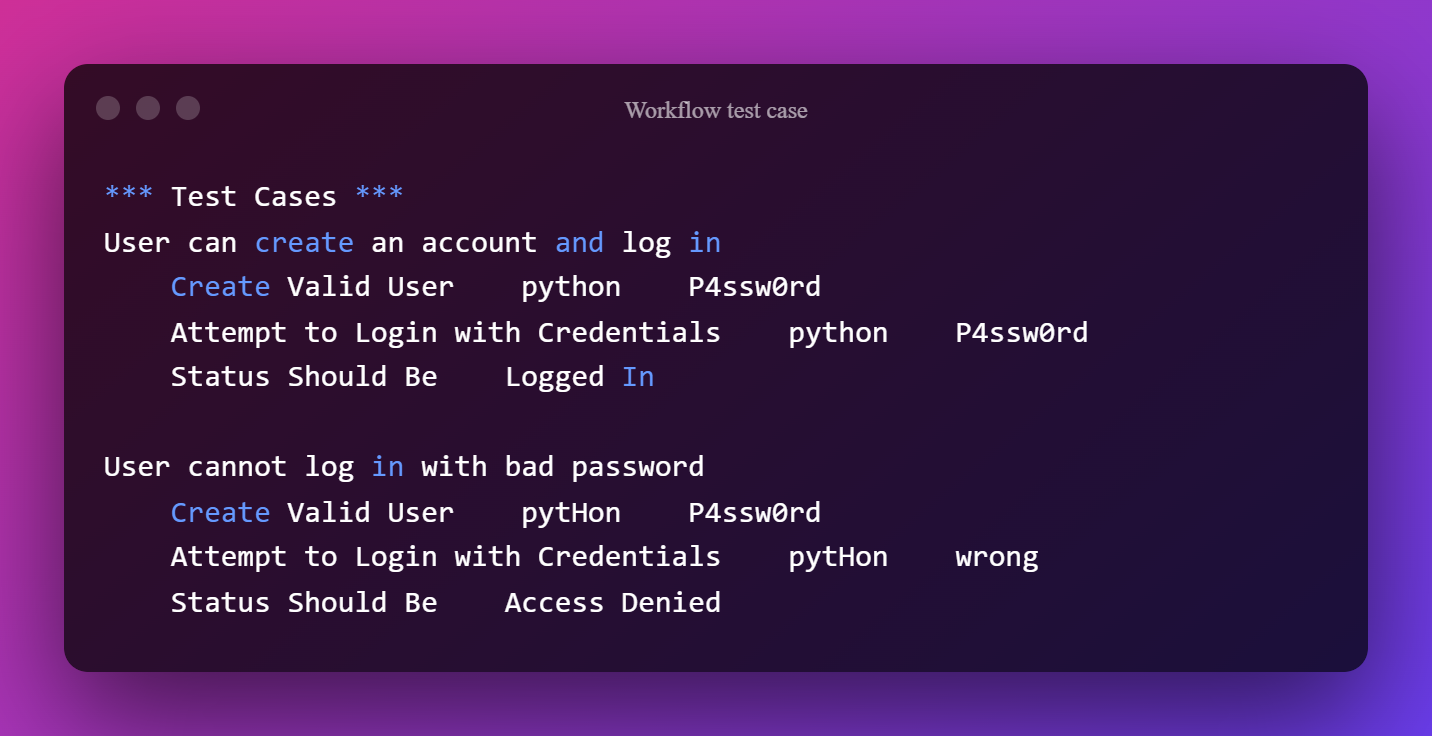 The second column typically includes a keyword name, with the exception of setting variables with keyword-written values.

Data-driven testing isolates test data rather than simulating procedures. In the robot framework, the [template] setting defines the test case for a data-driven test.

To build test cases in the robot framework, keywords from two sources are used.

Keywords for a Library

Standard libraries define all of the lowest-level terminology, which may be implemented using computer languages like Python and Java.

Standard, external, and custom libraries are among the test libraries available with the robot framework. The core framework includes built-in, screenshot, OS, and other standard libraries.

Keywords for the User

The capacity to generate unique high-level keywords from existing phrases is one of the most important features of the robot design. To further understand how it works, let’s look at an example. Variables are an important part of every test case in a robot framework. A variable is an excellent approach to specifying any data in a test case that is subject to change or variability.

Let’s have a look at how to define variables in a test case.

Aside from user-defined variables, the robot framework has built-in variables such as $TEMPDIR and $/, which we used in the prior example.

Making Use of Variables

Variables can be used anywhere in the test case.

However, they are most commonly used as keyword arguments. Consider the following example to illustrate what I mean.

Using directories, the test cases can be structured in a hierarchy; all of these directories provide high-level test suites with names derived from the directory names.

You can create custom [Setup] and [Teardown] in a test case, similar to [Template]. Consider the following scenario to better understand this.

The robot framework allows tags to be used to provide free metadata to test cases. “Force Tags” and “Default Tags” can be used to set tags in a file. [Tags], like [Template], can be used to assign tags to a single test case. Let’s look at an example to see how we use tags.

The report will include tags with test cases linked to them, as well as statistics based on the tags, after execution.

The robot framework’s test cases are built on keywords expressed in a tabular style, which makes them easy to understand and gives accurate information about the test case’s meaning.

It’s really convenient and simple to use.

Some of you have used it before, so if you have your tests set up and your Android / iOS app ready to go, give it a try.

You’ll be astonished at how well things run and how soon acceptance testing can be completed.