Zuckerberg vs. Buterin: Who Leads The Internet’s Future?

Zuckerberg vs. Buterin —who will be the bigger influence on the next generation’s internet?

The early years of the 2020s have already given us a glimpse into the future of the web.

Billions of dollars worth of cryptocurrencies and digital assets are being traded every day. Massive corporations hold petabytes of data to train algorithms that get better with every click.

The recent global pandemic has tested the waters for a new paradigm shift: a digital-first lifestyle.

In this article we’ll be looking at the future of the internet through the lenses of two of the most influential people in tech today: Facebook founder Mark Zuckerberg and Ethereum’s Vitalik Buterin.

It’s an easy comparison to make—both of these men were college dropouts, pursuing their own projects with great success. Though their paths sound similar, their vision and work provide us with two very different predictions on what the future of the internet may be.

Through Zuckerberg, we’ll look into a vision of an internet that connects people and creates communities. Through Buterin’s Ethereum project, we see a future that not only redefines the internet, but also redefines how we interact with money, governments, and the meaning of “trust”.

Back then, it was a directory of his fellow Harvard students, where each student could enter their own information and photos into a template. The idea proved to be a success, with over half of the student body signing up within the first two weeks. 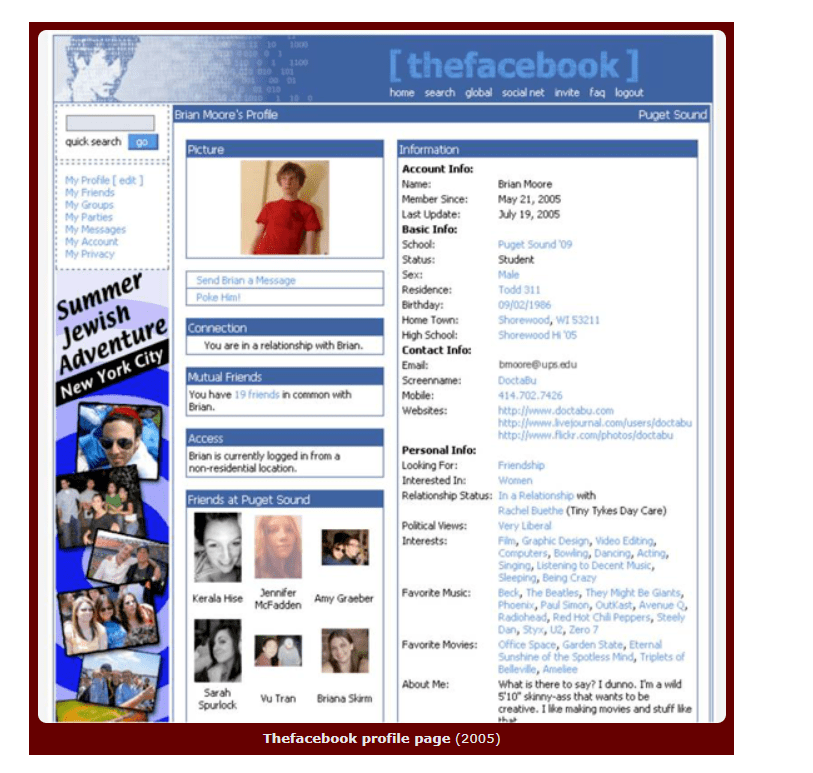 Later that summer, Zuckerberg dropped out of his university to concentrate on Facebook. His team moved to Palo Alto, California, where he soon received seed money from venture capitalist Peter Thiel. The following year, Facebook received $12.7 million more in venture capital.

Allowing high schoolers to sign up expanded their reach to new levels.

His company turned down numerous acquisition offers from giants such as Yahoo and Microsoft. As the app’s network effect took hold, it’s user base increased at an astounding rate.

Facebook soon expanded past its original app, having acquired Instagram, WhatsApp, and various other startups. On October 28th, 2021, Facebook rebranded itself as Meta Platforms Inc., a name change that reflected its focus on building the “metaverse”.

Today, Meta is now one of the world’s most valuable companies, joining an elite club of tech giants valued at over a trillion dollars. Facebook currently has 2.91 billion monthly active users.

With its dominating foothold in the current state of the internet, whatever Mark Zuckerberg plans to do with his digital empire will surely make waves.

The Birth of Ethereum

Vitalik Buterin was early in crypto from the start.

The Russian-Canadian writer and programmer was already participating in the Bitcoin community as early as 2011. In these early days, Buterin noted that he spent 10-20 hours every week writing blog posts related to Bitcoin.

His articles led to a partnership with another Bitcoin enthusiast, Mihai Alisie, where they launched the Bitcoin Magazine in late 2011. With crypto occupying so much of his time, he decided to drop out of the University of Waterloo to pursue his newfound passion full-time.

In late 2013, Buterin started thinking about a new form of cryptocurrency, an idea that would eventually lead to the creation of Ethereum. Buterin noticed that so many crypto projects were too concerned with specific applications and were not sufficiently general.

He realized that instead of focusing on specific protocols, he could create a project that was programmable.

A programmable cryptocurrency meant that you could do much more than what Bitcoin was currently capable of. Ethereum was more than a digital currency—it was a software platform.

In 2014, Vitalik Buterin officially announced Ethereum. He built a strong team of excellent mathematicians, programmers , and entrepreneurs which attracted plenty of investors. He soon received a Thiel Fellowship grant of $100,000 dollars, and was projected to follow in the footsteps of tech visionaries like Mark Zuckerberg and Steve Jobs, all at the young age of 20.

Just seven years later, Buterin has a net worth of over $1.46 Billion dollars and his Ethereum project is now the second largest cryptocurrency network, just below Bitcoin.

Over $17 Billion worth of Ether tokens is exchanged daily. There are now thousands of decentralized programed applications in its ecosystem. All thanks to the brilliant idea of making Bitcoin smarter. 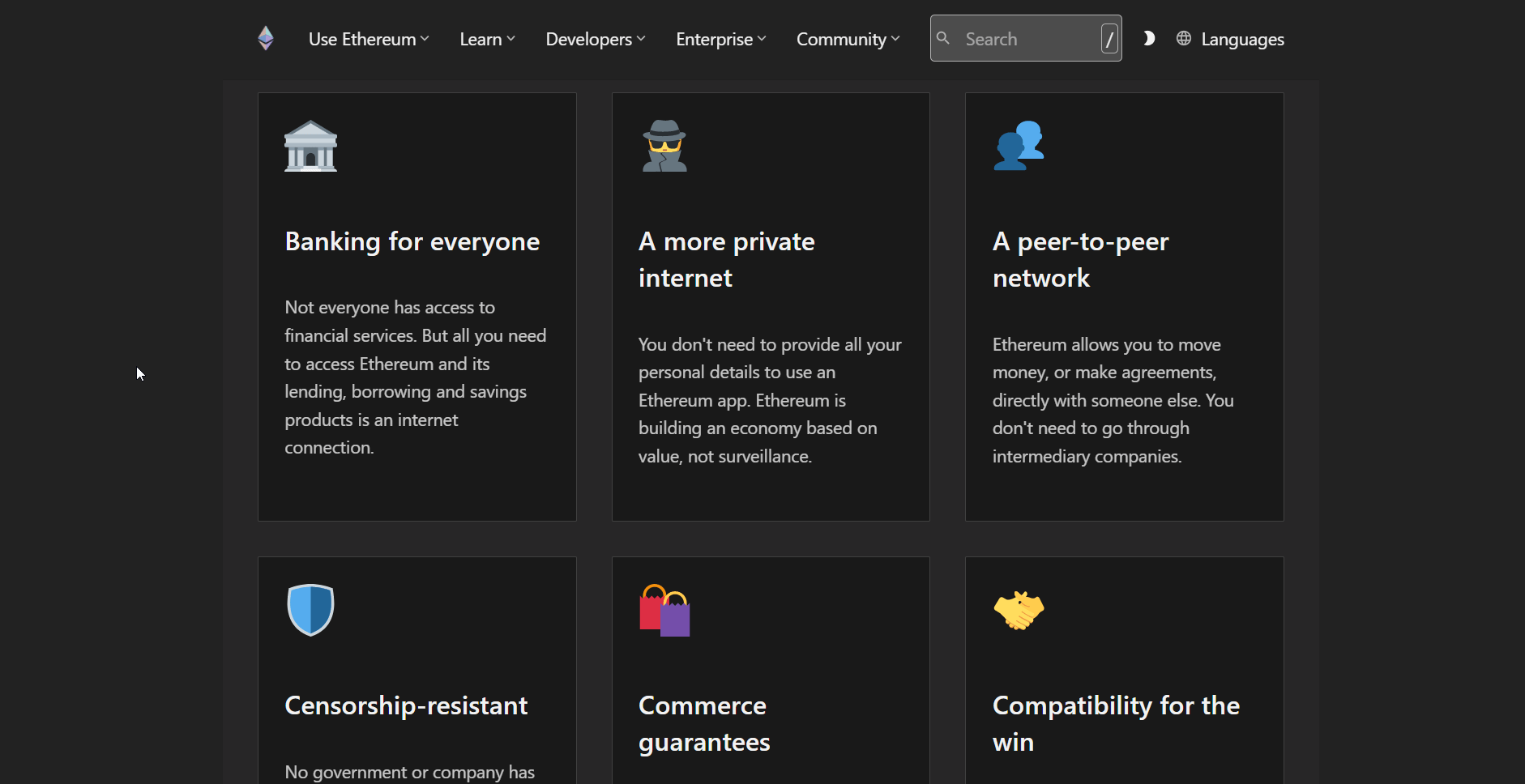 Zuckerberg vs Buterin: How Are They Different?

On the subject of free speech, Zuckerberg’s actions often clash with his public stance. He was adamantly defending free speech in a talk at Georgetown University.

Despite this, it seems Zuckerberg’s stance on free speech seems to depend on the situation. Recently, Zuckerberg became the subject of criticism when Facebook followed the Vietnam government’s demands to increase their censorship of “anti-state” posts.

Facebook has also become stricter with their guidelines, in part because of rising cases of COVID-19 misinformation and hate speech. Though the reasons seemed right at the time, many fear that the platform’s ability to censor can be abused.

While Buterin’s contributions to crypto could almost go without saying, Zuckerberg and Facebook also have big plans in the cryptocurrency space. In early 2019, Facebook confirmed that they were working on their very own cryptocurrency, known as Libra.

However, due to strong opposition from central banks, this project later had to scale down their ambitions to just focus on developing their own stablecoin. Stablecoins are a type of cryptocurrency that have a fixed value, usually tied to a specific base currency.

So far, Facebook’s roll out of their own crypto wallet and stablecoin has been slow. Facebook later rebranded their cryptocurrency from Libra to Diem, with many critics calling the project more like “Paypal-but-it’s-Facebook.”

On Decentralization and Trust

Trust is a major concern in the current state of Big Tech. With so much of our lives becoming part of the data economy, the question remains: do we trust Big Tech with our data?

Facebook has already been under strong criticism for allowing Cambridge Analytica to use the personal data of millions of Facebook users. There are also concerns that Facebook itself as an organization seems to be under the direct control of its CEO.

Recent whistleblower leaks show that Mark Zuckerberg’s influence in company-wide policies are “unprecedented at a company of this scale.” This centralized structure leaves the door open for misuse.

As a proponent of decentralization, Buterin values the idea of trustlessness—the ability of an application to continue operating in an expected way without needing to rely on specific people to keep it this way. For Buterin, trust is assuming about the behavior of other people.

For example, not growing your own food is a kind of trust. We trust that enough people in the economy will sell food to meet the demand of the community. When we run an application, we trust the developers have written their code honestly and competently.

In a decentralized application, there is no need to trust individuals. People who use Ethereum can be absolutely sure that transactions are legitimate, everything is transparent, and no one individual can change the way Ethereum works on the fly.

The Future of The Internet

Virtual reality and the need for remote collaboration have made the metaverse a hot topic in Silicon Valley.

Facebook, now Meta, has bet big on their plans for the metaverse. Zuckerberg states that soon Facebook will not be known as a social media firm, but as a major player in the future metaverse.

Project Aria is a research project which will help Facebook create future Augmented Reality (AR) technology. With this device, users can perceive the real world with added information using wearable glasses. The hardware also includes eye-tracking and sensors for video and audio.

Facebook’s Horizon Workrooms will allow remote collaboration using VR technology. You can join a virtual room from your computer and have expressive conversations that feel more like you’re together in the same room. 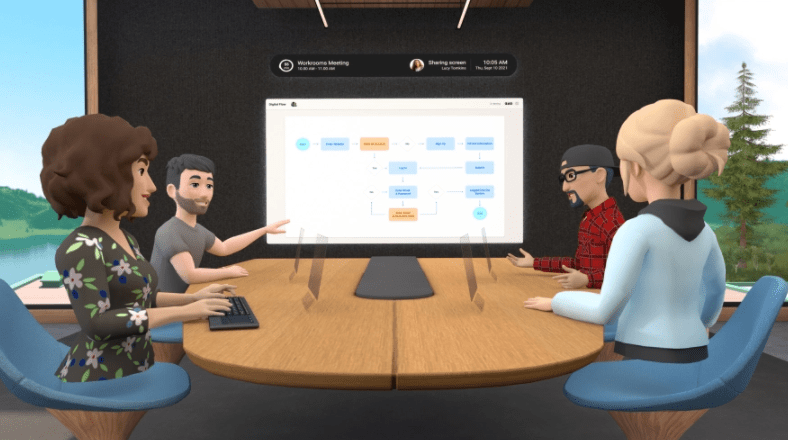 A Metaverse Built on Ethereum

When asked about Ethereum and where it would be in the next five or 10 years, Buterin optimistically replied “Hopefully running the metaverse,”. And so far, his prediction is off to a good start. Various metaverse blockchain projects are running on the Ethereum network.

Decentraland is another metaverse project built on the Ethereum platform. Virtual estate in Decentraland are digital assets which can be bought with the MANA token, Decentraland’s in-game currency. 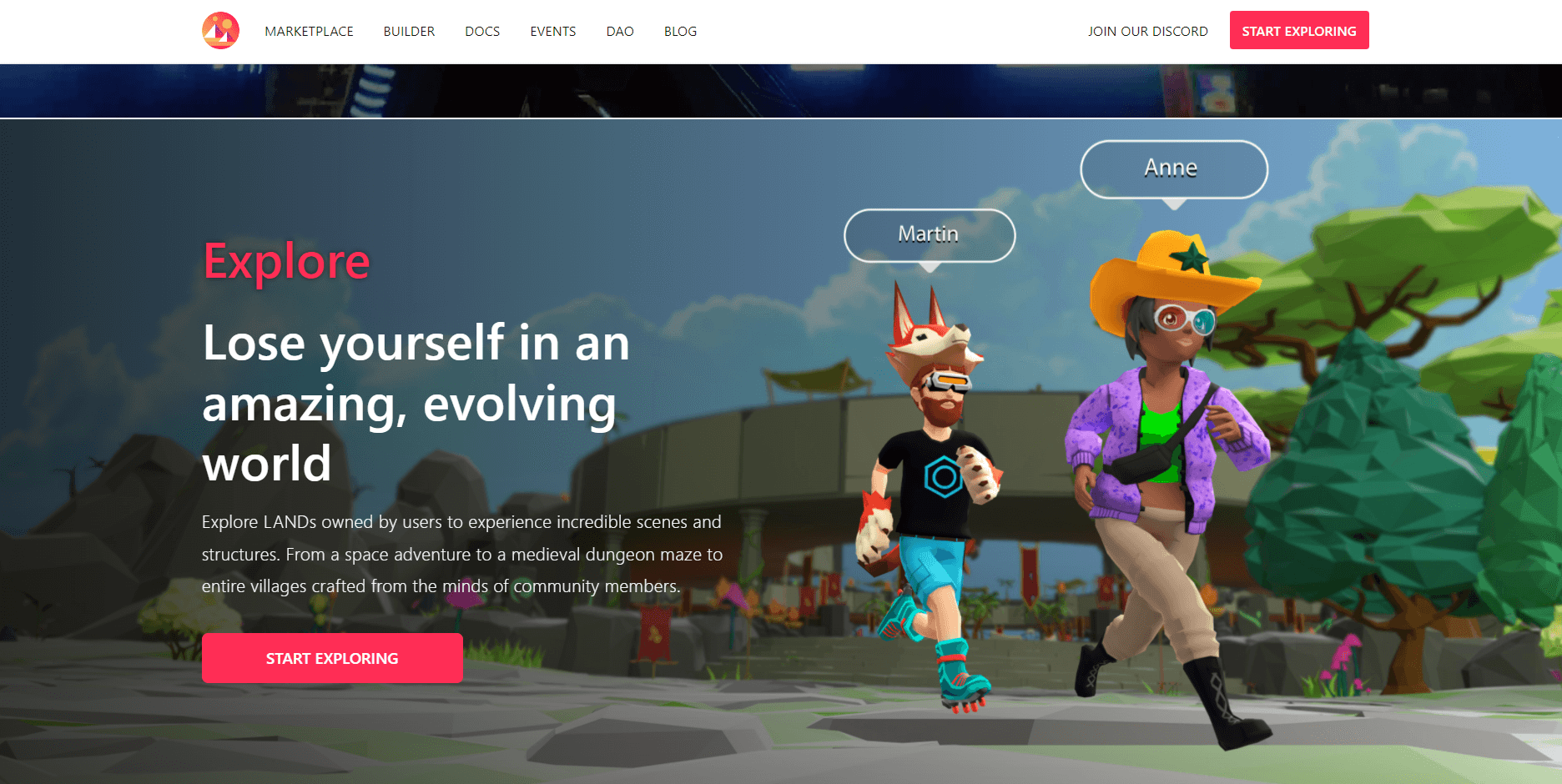 Buterin is well aware of the trend that was only accelerated by the pandemic. The Internet is now at the center of people’s experiences. When asked about Facebook’s plans for focusing on their own metaverse, Buterin noted that it makes sense to build in that direction.

He warned, however, that Facebook’s history of scandals may be a roadblock. Due to growing mistrust of Facebook as a platform, the social media giant may want to look at already-established blockchain technology to build their metaverse.

Facebook as a platform today has already been helpful in connecting communities, organizations, and government bodies. Facebook even provides guidelines and best practices for potential local government bodies looking to start their own Facebook pages. 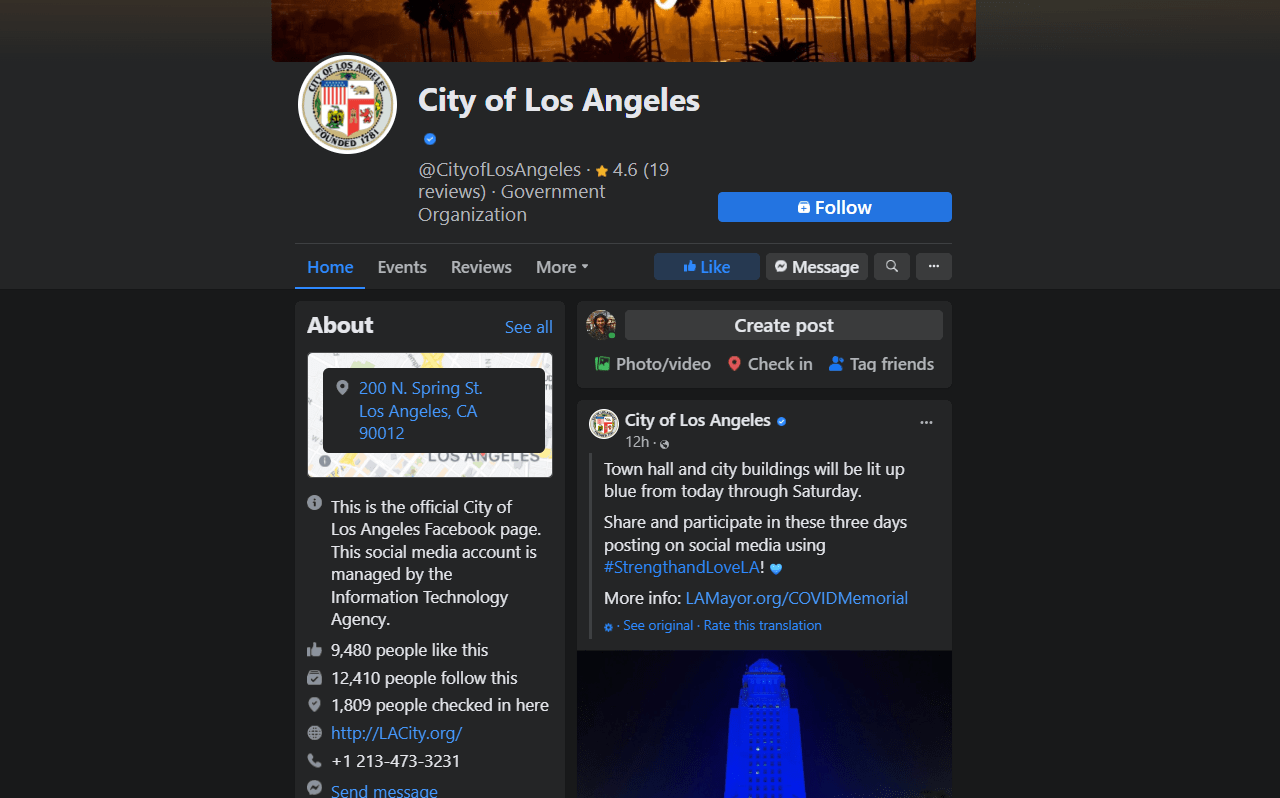 However, the company is still subject to criticism. Facebook’s been accused of enabling the spreading of misinformation, influencing elections, and playing a part in inciting violence. With issues of centralized platforms like Facebook and Twitter not being held accountable, some technologists are looking to build decentralized alternatives.

In a recently published post, Buterin touched on the immense potential for blockchain technology to change the way we run local governments.

He cites projects like citycoins.co which aims to create local tokens that can help citizens support their own cities while also earning Bitcoin on the side.

In his article he mentions two distinct ways blockchain ideas can help cities:

Buterin believes that blockchains can help create more trustworthy systems. Possible applications include better certification, asset registration, and even voting. Despite this, blockchain technology still has a long way to go before earning public acceptance.

The future of the internet is not yet set in stone, but the technologies we use today may likely be the foundation of whatever comes next.

Will the future of the internet just be a continuation of the Big Tech dominance we see today? Or will decentralized applications prevail and become the standard infrastructure in communication, finance, and even governance?

Most likely, it will be somewhere in between. Neither Ethereum nor Facebook show any signs of slowing down. And as these technologies clash, so will our ideas of what the web should be. Issues such as data privacy, censorship, and trust will remain ever relevant as our lives continue to expand into the digital world.

Do share this article if you find it insightful. Don’t miss the latest news in AI, ML, and future tech by subscribing to our weekly newsletter!