The Internet has undergone huge changes since its inception. It has become a fundamental component of human connections and it continues to develop from Internet Relay Chat (IRC) to modern social media. It is evolving into the town square of the global community of the future.

You’ve most likely heard the phrase “Web 3.0” bouncing around the internet. You may have seen an infographic that explains how Web 3.0 operates and its mind-boggling developments. At the very least, you should have seen a short film describing how Web 3.0 will permanently change the face of the world.

If you haven’t done any of the above and have no idea what Web 3.0 is, here is the article for you. Before we go ahead to see what the future has in store for us, let’s take a look behind us to the early days of the internet.

The evolution of the web

The web has grown significantly over the years, and its applications today are nearly unrecognizable from its earliest days. The evolution of the web is sometimes divided into three stages: Web 1.0, Web 2.0, and Web 3.0.

It is impossible for today’s youth to envision the internet without Google, Facebook, or Instagram Stories. However, there was a Classical Age of the Internet that ran from the mid-1990s to the early 2000s. Web 1.0 was the initial incarnation of the internet. The majority of participants were content consumers, whereas the creators were largely developers who built websites that delivered material mostly in text or picture format.

Instead of dynamic HTML, Web 1.0 sites served static material. Data and content were provided through a static file system rather than a database, and webpages lacked interactivity. The notion of video streaming did not exist. People would crowd into AOL chat rooms to “speak online.”

It took a whole day to download a single song. When connecting to the internet through dial-up, you had to remove your landline phone. No, cell phones did not exist. You had to communicate with individuals in person, without the use of emojis. It was horrible, I tell you!

The internet was at a tipping point in its history in the early 2000s. It may stay a one-way, dull library, or it could become an amazing innovation that connects people from all over the world. Fortunately, it chose the second option. You don’t have to be a developer to participate in the creative process in the Web2 universe. Many applications are designed in such a manner that anybody may simply become a maker.

With the development of social media, users could finally enjoy an immersive experience on “the Net.” You could now publish and broadcast video content to YouTube, and Google became a go-to site for anything. Web2 is incredibly simple, and because of that, more and more individuals across the world are becoming creators.

Web2 was about participation rather than observation. By the mid-2000s, most websites had already transitioned to Web2 (Web 2.0). Online gaming enabled multiplayer interactions between players all over the world. You could stalk your sweetheart on Facebook and share amusing photographs of your pet on Instagram, but only from your smartphone.

Web 3.0 is the next phase in internet growth that puts the web’s control pad back in the hands of consumers. The distinction is created by emerging technologies like blockchain, which enable the internet to function as a peer-to-peer (P2P), trustless system.

There are a few essential distinctions between web2 and web3, but decentralization is at the heart of both. Web3 applications, or Dapps, are built on decentralized peer-to-peer networks like Ethereum and IPFS. These networks are built, run, and maintained by their users rather than by a company. They self-organize and have no single point of failure.

It is the third stage of the web’s growth, often known as the read-write-execute stage, and it relates to the web’s future. Artificial Intelligence (AI) and Machine Learning (ML) allow computers to comprehend data in the same manner that humans do. The goal of Web 3.0 is to open up and decentralize the Internet.

Users must rely on network and cellular carriers to maintain track of data passing through their systems at the moment. With the emergence of distributed ledger technology, users will be able to reclaim control of their data in the near future. Big data companies and global corporations should no longer share personal information or have a monopoly on power and information. 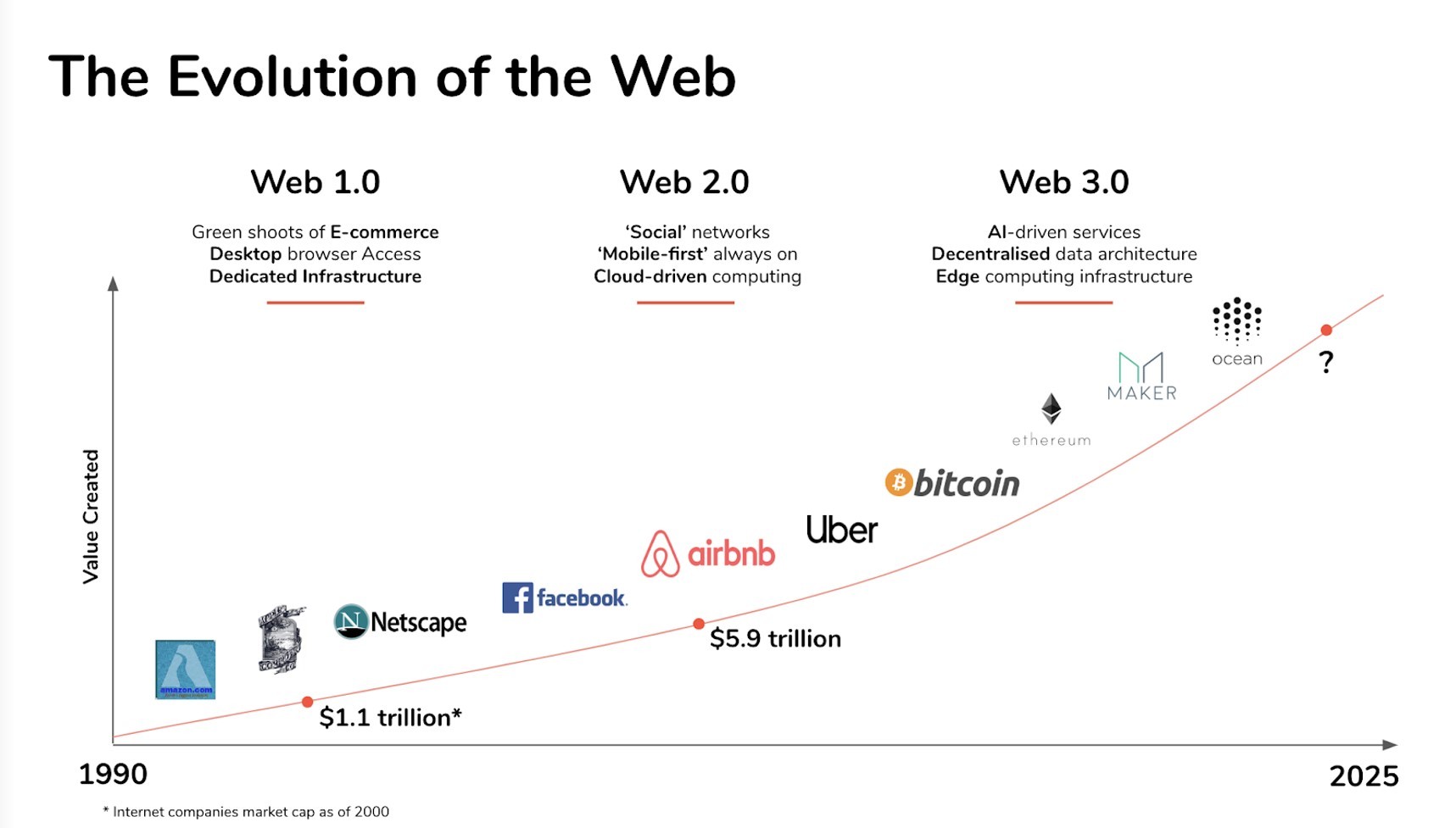 When we communicate through the Internet, copies of our data are created and kept on the servers of firms such as Google or Facebook, and we lose control over our data as a result. The fact that our information is held by third parties is not inherently a negative thing; nevertheless, when a single company mediates the entire process, things might go wrong.

Do we need a society in which the information you offer might be misused due to greed or malice? This goes well beyond privacy; the root of our issue is one of control. We pass away ownership of petabytes of data to firms and individuals on a regular basis with no apparent option.

Here is a collection of Web 3.0’s groundbreaking qualities to help you understand how it will operate and how you will gain from it! Artificial Intelligence (AI) is not a new notion that will appear on Web 3.0. We’ve already noticed it in Web 2.0 applications. However, by Web 3.0, AI will have such a fast learning mechanism that it would be hard to deny its existence. AI will swiftly distinguish between good and poor data, between actual individuals and bots, and, most crucially, between fake news and true reporting.

Web 3.0 will bring in new avenues of communication and virtual connection. Chat, email, and video calls may still be possible. Users may, however, have access to 3D identities that represent them on the web. These virtual avatars, similar to online gaming characters, will be our representations in corporate transactions, work partnerships, and dating applications.

Data will be stored on several dispersed nodes in Web 3.0. This approach ensures that there are always enough backup nodes to supply the chain and keep servers from stalling or failing. Simply stated, the internet will never be unavailable as a result of catastrophic server failure.

When Web 3.0 becomes a reality, huge firms such as Amazon, Facebook, and Google will no longer need their factory-size servers to keep the data of their customers. Instead, internet users will have total control over their data, including financial information, login information, etc.

Semantic metadata is data that describes the “meaning” of the data. There are values that reflect certain ideas in any environment where data exists. Semantic metadata will be a critical component of Web 3.0. This method will allow the web to comprehend the meaning of symbols, keywords, and messages. The network, for example, will detect the classic “smiley” emoji, which is made by two dots followed by an arc. Still, it will recognize that it represents a human grin, a gesture of delight and acceptance.

Web 3.0, like any new technology, is difficult to deploy in its current state, at least at first. Web 3.0’s problems and drawbacks include the following:

Finally, Web 3.0 will not be a one-hit-wonder for everyone. More seasoned internet users may recall that Web 1.0 took nearly a decade to gain worldwide traction. When Web 2.0 arrived, it brought with its smart technology and social media, but people were still figuring out how chat rooms and email functioned. Many businesses will take their time transitioning from a centralized network to a trustless chain.

Many gadgets will become outdated, but their users will be unable to make the transition to Web 3.0 immediately once. As a result, Web 2.0 and Web 3.0 will coexist for the foreseeable future.

Web 3.0 appears to be a game-changing step forward in technological advancement. Its publication will most likely represent a “before and after” point in our interaction with the internet. However, we must not forget that those with bad motives will continue to exist.

Malevolent users may purposely flood the web with false or misleading material, creating an ideal environment for online crime. To reduce the frequency of hack assaults, cryptography, and Artificial Intelligence learning methods will need to improve and update quickly.

The Internet has undergone a long evolution, and it will definitely continue to do so in the future. Because of the massive expansion of inaccessible data, websites and apps may shift to a web that provides a much better experience to an increasing number of people all over the world. While no clear definition for Web3 (Web 3.0) exists at this time, it has already been spurred by technological breakthroughs in other sectors.

As we progress toward a more decentralized internet, with Augmented Reality (AR) and Artificial Intelligence (AI) playing important roles in defining our use-case scenarios, we may anticipate a new wave of the global internet revolution.

Web 3.0 delivers much-needed flexibility for creativity to developers. Users, on the other hand, may anticipate improved digital experiences as well as a more upgraded and polished internet overall. If done correctly, Web 3.0 has the potential to save time, and boost productivity at a low cost. We may expect a smarter internet because, believe it or not, it is here to stay.