Metaverse Sandbox – Everything You Wanted to Know

The gaming industry is investing a growing amount of money into blockchain-based initiatives, particularly in developing metaverses that will improve the entire gaming experience.

Following Facebook’s October 2021 rebranding as “Meta,” the notion of metaverses and gaming in them has exploded in popularity, since they have changed the way people connect digitally and influenced how we define ownership of in-game digital goods.

There are several game metaverses available.

However, some look more promising than others.

The Sandbox metaverse is one such metaverse that you should be aware of.

It took an open and decentralized metaverse approach. This is where the user can generate money by creating their own content.

I’m here to fill you in on this incredible initiative.

What is The Sandbox?

The Sandbox is a pay-to-win game that uses blockchain, DeFi, and NFTs in a three-dimensional metaverse. It allows users to develop and build their own games and digital assets, as well as personalize them with free creative tools like VoxEdit and Game Maker.

It allows players to create and construct their own avatars to access the numerous landscapes, games, and hubs. The developed digital items can finally be monetized via NFTs and sold for SAND tokens on The Sandbox marketplace.

Developed by Pixowl, it is a metaverse and gaming environment built on Ethereum that allows users to create, share, and monetize in-world assets and game experiences.

It intends to disrupt the existing gaming business in which platforms own and manage user-generated content, limiting the rights of artists and gamers.

Moreover, users in The Sandbox have complete control over their in-world creations.

Furthermore, these solutions empower consumers by offering them copyright ownership of their work through using Blockchain technology and smart contracts.

The Sandbox’s first project was VoxEdit, a Voxel Editor that allows users to build voxel objects, rig them, and animate them. With this 3D modeling and NFT creation application, Windows and Mac users can start designing 3D objects ranging from humans to plants, animals, and tools.

Once built, you can export the objects from VoxEdit and use them as in-game assets in The Sandbox store.

The native marketplace for The Sandbox is its second product. You can upload, publish, and sell your VoxEdit work on the NFT marketplace.

To offer decentralized storage and access, all uploads are routed through IPFS. That upload is registered on the Ethereum Blockchain to prove ownership. All inventions that pass this phase become assets that players can sell via an initial selling offer on the NFT marketplace.

Finally, there’s The Sandbox Game Maker. Developers and fans who wish to make 3D games can do it for free and without needing to know how to code. A visual editor can help you create games in a matter of minutes.

Every new game contributes to the ever-growing library of interactive creations and experiences in the metaverse.

As discussed above, the Sandbox blockchain gaming platform is made up of three products that work together to deliver a complete user-generated content (UGC) creation experience.

Users will benefit even more from the merged goods since they will be able to employ blockchain and smart contracts to protect copyright ownership for their user-created material.

Let’s explore them in detail.

VoxEdit is a simple and clean voxel modeling and NFT creation application for PC/Mac that lets users build and animate 3D objects. These include people, animals, cars, plants, tools, and tools that can be sold on The Sandbox marketplace and used as in-game components.

You can quickly manipulate voxels, which are square 3D pixels that resemble building blocks, with VoxEdit to produce amazing effects.

You can then export the objects created using VoxEdit and use them as NFT game components on The Sandbox store.

You can upload, publish, and sell NFT products created using VoxEdit on The Sandbox’s NFT marketplace.

To offer decentralized storage, creations are first uploaded to an IPFS network and then registered onto the blockchain to establish ownership.

After that, inventions become assets that can be sold by placing an initial selling offer on the marketplace, where interested purchasers can then acquire them.

The Sandbox Game Maker allows anybody to create stunning 3D games for free. Because of accessible visual scripting tools, no coding is necessary to build spectacular 3D games in minutes.

As a result, creators contribute to a large metaverse filled with a diverse spectrum of incredible interactive creations and experiences.

Because it is a drag-and-drop system, anybody can use the game builder to create their own virtual environment without any coding knowledge.

What are SAND, LAND, ASSET Tokens?

To establish a circular economy among all sorts of users who will engage with the platform, The Sandbox employs multiple token types: players, creators, curators, and land owners:

SAND is an integral component of The Sandbox, which was released on the Binance trading platform in August 2020. They are focusing on building essential mechanisms that will make SAND inextricably linked to The Sandbox and its value.

Being an ERC-20 utility token established on the Ethereum network, it will eventually serve as the foundation for transactions within The Sandbox and has the following uses: The Sandbox (SAND) crypto has the following distinguishing features:

What is the purpose of SAND?

In The Sandbox metaverse, an LAND is a digital piece of real estate that users can purchase to create interactive experiences. You can fill LAND with Games and Assets once you control it.

Each LAND is a one-of-a-kind (non-fungible) token that exists on the public Ethereum network (ERC-721). Within The Sandbox, there will be a maximum of 166,464 lands, each enclosed on a map that creates its metaverse.

Sandbox map consists of two plots which are mentioned below: 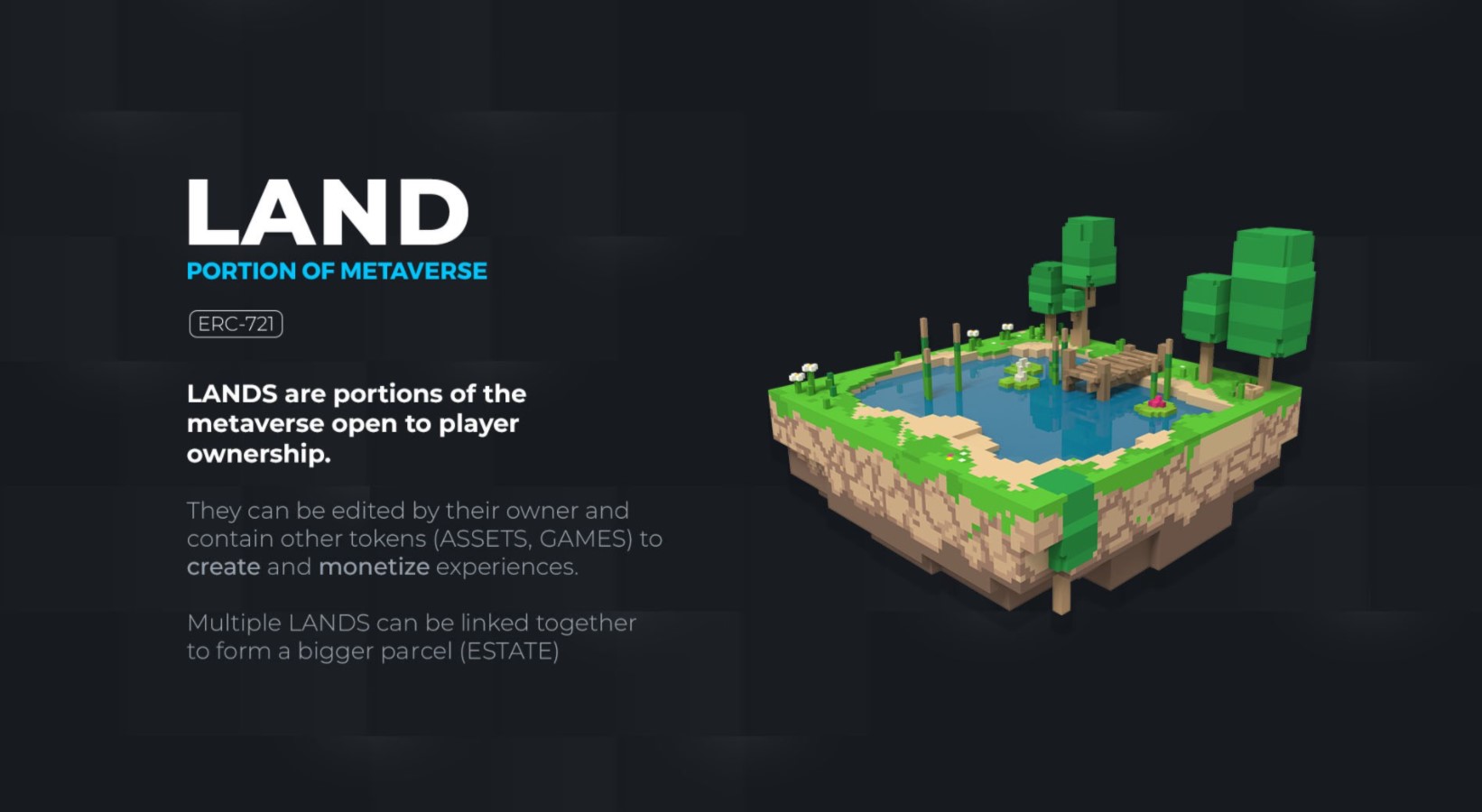 The Sandbox metaverse is centered around LAND. You will be able to play and create games, earn tokens, hold contests, and much more!

What can you accomplish with LAND?

Where can you purchase LAND?

Official Sandbox LAND sales are held on the map of The Sandbox website, where you can purchase LAND.

The dates of these sales are publicized weeks in advance to give you plenty of time to plan.

Alternatively, certain third-party NFT exchanges, such as OpenSea and Rarible, offer second-hand LAND for sale. Keep in mind that usually, they can be more costly than LAND in legitimate sales.

Consider making a game or constructing a digital asset that is yours for life?

The Sandbox helps gamers and creators in generating UGC that will always be theirs, granting them ownership in the first place.

In contrast to mainstream gaming, where no matter how wonderful your art is or how well you design a game, it will always belong to the firm, with little to no ownership granted to the user or the developer. It is the decentralized power that comes with a blockchain-backed metaverse.

If you’ve ever played an Asphalt game where you can buy vehicles and store them in your garage, you’ll know what I’m talking about.

Think about this: If you’re barred off the platform, is the car yours for the rest of your life?

Nobody can stop you from using The Sandbox in the first place, and blockchain technology guarantees that your asset is secure and cannot be stolen or removed from the internet.

In conventional gaming, the organization has most of the proceeds from the sale of assets or digital items by one player to another on the platform. The player has complete control over the metaverse.

If a player intends to sell his LAND or asset on the market, he must do it through the marketplace. Because he owns the product, he is entitled to the bulk of the sale proceeds.

The Sandbox allows users to rent their owned virtual property, i.e. LAND, to other players. It is a wonderful source of passive income that works similarly to collecting rent from a renter in the real world.

Furthermore, players can always use VoxEdit to build digital assets and sell their piece on the marketplace, gaining extra revenue inside the metaverse.

The Axie Infinity game enterprise has perfected the art of generating income for its users.

Sandbox supports NFT, which is popular. It includes a dedicated marketplace for trading ERC721 and ERC1155 NFT coins.

It allows you to develop a digital asset with the option to upload and sell it on the marketplace. It also advertises its assets on OpenSea, one of the most well-known NFT marketplaces.

But… The competition’s growing

The Sandbox is taking on industry titans in the shared experience gaming market.

Giants like Minecraft and Roblox will be difficult to overcome. They have the potential to force any competitors out of the market since they are backed by large tech giants (Minecraft by Microsoft) with massive war chests.

Sandbox, on the other hand, is banking big on decentralized gaming, which might be a game changer in this field.

The Sandbox has completed Alpha Season 1 and is presently working on Season 2. It is allowing anyone to access a social center and develop a fantastic collection of fantasy and role-playing experiences that can be shared as NFTs with other players, producers, and artists on the site.

Its team has expanded to more than 100 employees. It stays on the Ethereum blockchain, which charges transaction fees.

However, the company is working on a layer 2 solution that might lower transaction fees and speed up transactions.

Furthermore, many people are only now becoming aware of this metaverse, and they purchase LAND to help the platform’s content and experiences grow. There is still more space for growth, but the most challenging challenge is recruiting people who aren’t currently connected in the blockchain ecosystem.

The Sandbox has attracted thousands of gamers owing to its near-addictive gaming idea, easy-to-use tools for building in the metaverse, and profit possibilities.

It gained popularity during the pandemic, with some players spending their entire lockdowns absorbed in The Sandbox setting. The game’s value stems from the player’s sense of ownership and creative flexibility.

Since its start in 2012, The Sandbox has come a long way.

It has evolved from a shared experience gaming platform to a metaverse that empower users by granting them ownership of their digital assets and LAND parcels.

It is more than simply a gaming platform; it is also an NFT marketplace where artists can develop and sell their works in return for SAND tokens.

Further, it has turned into a virtual real estate marketplace where actual individuals can purchase houses or rent out space to make a passive income.

The future of The Sandbox sounds exciting, doesn’t it?

Let us know your thoughts in the comments.

How to Open your Own Art Gallery in Metaverse

Gather – Build A Metaverse for Your Team