NFTs have become one of the biggest trends in the crypto-active world in 2021, with a 55% increase in sales compared to 2020. So what does this mean for the future of the art market?

It seems clear that this is no temporary fad, and a revolutionary approach to making and selling/buying art pieces is already taking the world by storm. We’ll take a look at one of the most promising ways this technology has allowed the art market to move forward: generative art, or how the intersection between programmers and artists can yield absolute masterpieces.

The first fundamental question to talk about NFTs and fan tokens is to explain the concept of fungibility. A 100$ note is fungible, because every 100$ note is worth 100$, no matter if it is new, old, crumpled, slightly torn. The same principles apply to fan tokens and to cryptocurrencies like Bitcoin, ETH, and others. These are all fungible, meaning the value of each is always the same.

Bitcoin in my wallet has the same value as Bitcoin in another wallet. NFTs, on the other hand, are quite the opposite.

Despite its recent prominence, the first use of the term generative art dates back to the 1960s. These are works created from programming codes. An artist/programmer develops an algorithm with criteria regarding shapes, predominant colors, special strokes. This algorithm, within the established standards, randomly creates unique works each time it is triggered, which adds a fascinating element of surprise.

Tyler Hobbs, one of the best known generative artists, said the following in an interview with the Lateral Action podcast (I recommend the full interview):

“The randomness makes the code much more of a list of guidelines than the exact description of an image. In generative art, you create a list of aesthetic preferences and patterns rather than developing a specific image.”

Generative art, however, only began its close relationship with NFTs in the late 2010s. Until then the works generated were traded only in the physical or digital form not involving blockchain. 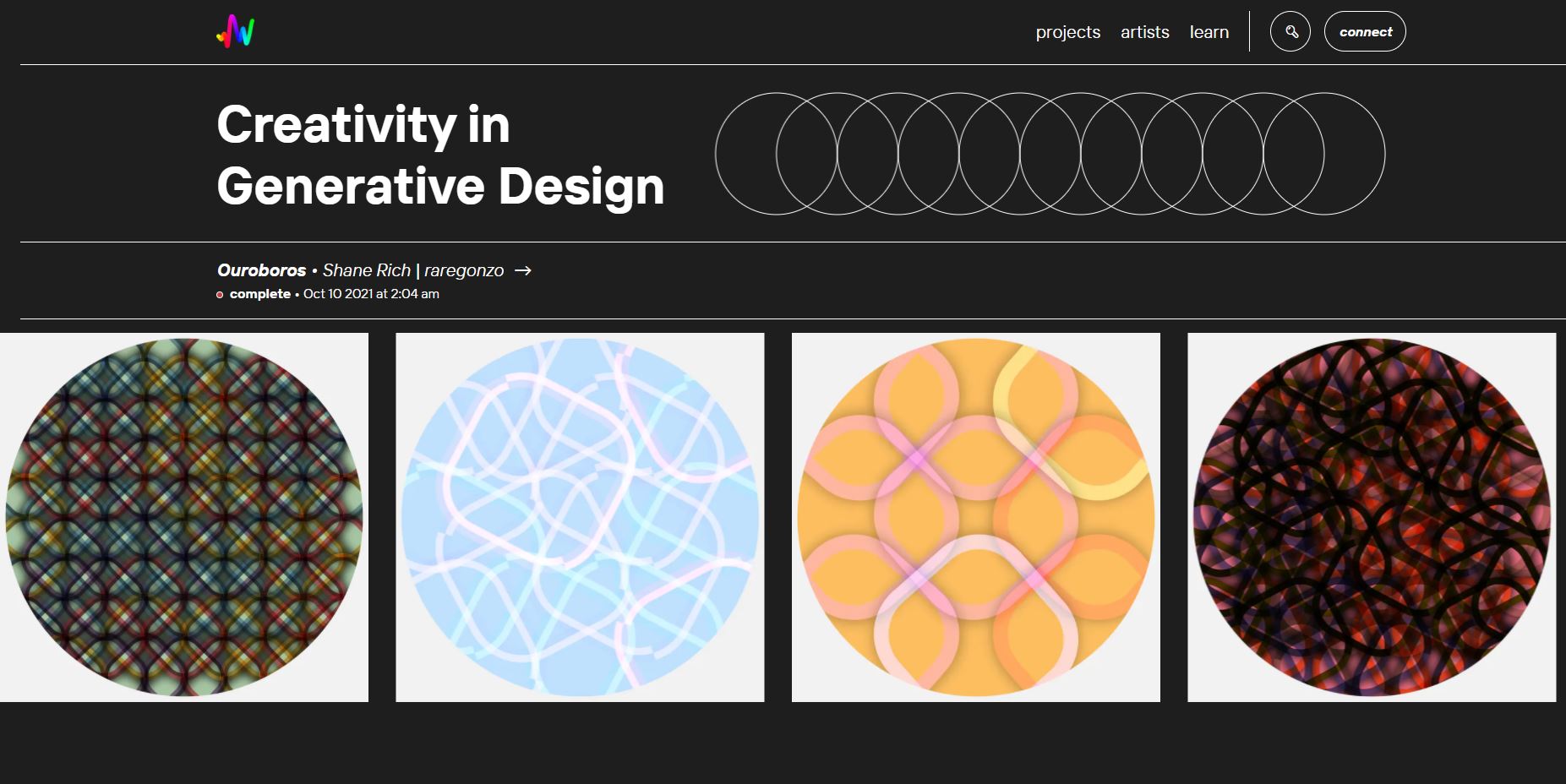 Art Blocks began precisely with the proposal to bring together generative art and blockchain; launched in November 2020, it is a platform where artists/programmers create their algorithms on the Ethereum network using smart contracts that, when executed, generate random artworks within established standards and guidelines. Each generated work becomes an NFT automatically placed in the buyer’s wallet.

The platform has several collections of different artists and styles. Each artist determines the characteristics of their collection, the initial value of each work (unique for every collection), and the limit of works that the algorithm will be able to generate.

Once the code is entered into the blockchain, artists can continue testing and modifying it until they are comfortable “locking” it in. Once this happens it is no longer possible to tinker with anything, or even create more works after the collection limit is reached, which guarantees buyers exclusivity on them.

The user entering the platform needs to have a MetaMask wallet connected; once inside, just choose the project with the features you like the most. Although it is not possible to know exactly what the final work will look like, it is possible to at least get an idea of the style by looking at the works previously generated in the collection.

Of course, to proceed it is necessary to see if there are still works of the collection available to mint. If there are, just click the buy button (you will be charged, in addition to the value of the work, the gas fee for the transaction), and as soon as it is confirmed, the work is already generated as an NFT, being transferred to the user’s wallet and can be sold on specialized marketplaces.

As previously mentioned, the randomness creates an element of surprise that draws buyers’ attention, not only for the excitement caused by the fact that you will find out what your work is like only after you pay, but also because all works in a collection are initially sold for the same price, so there is the chance of getting one with characteristics that make it rarer – and therefore more valuable in the market.

The initial value of the works is usually low, sometimes in the tens of dollars. However, the secondary market is quite heated, which guarantees artists good returns with the percentages of royalties automatically collected at each resale, also thanks to smart contracts. There is also the artist’s choice regarding the rights that the buyer has over the work. Some grant the right to commercial use of the image, others just the right to create a physical copy for home use, as a personal collection.

A Business of Millions

Art Blocks is one of the most financially successful projects in the history of NFTs. According to Cryptoslam.io, as of 16/10/2021, it has grossed over $994 million, the third-highest amount behind only Axie Infinity and CryptoPunks.

The most expensive work to date has been one from the Ringer collection by Dmitri Cherniak. It sold at the end of August for $5.66 million to the specialist NFT investment fund, Starry Night Capital.

Prior to this, the largest sale was for US$3.3 million, of the Fidenza collection by the aforementioned Tyler Hobbs. Fidenza is one of the most successful collections; there are 999 pieces generated by an algorithm that creates random shapes, but always with the presence of colored rectangles and squares. Other works have also been bought for over $1 million.

There are other generative art projects besides Art Blocks and one that is also worth mentioning is Autoglyphs. Launched in April 2019, it is from Larva Labs, creator of CryptoPunks, and has moved almost $40 million.

For the future of blockchain generative art, we can expect several other projects exploring different elements that can be created with increasingly sophisticated algorithms. Remember, it’s not just static 2D works that can be generated, but multiple formats, including animation and 3D. In the same interview with Lateral Action, Hobbs cited 3D sculptures in virtual and augmented reality, for example.

“The main difference between sculptures in the real world and in virtual reality is that in the latter you no longer have physical limitations, you don’t have to worry about weight and the size of things. It would be interesting to explore the generation of large-scale 3D sculptures in which you could walk around and interact in VR.”

Hobbs also cited artificial intelligence increasingly able to learn to distinguish and reproduce real images as a great potential for creating new possibilities in the field of generative arts.

It is clear that the junction of emerging technologies, whose development has been increasingly accelerated, will produce effects that are not yet possible to understand. However, precisely because of this it is important to be aware of these trends in order to understand how topics such as generative art (especially the algorithms behind it) can impact the future of other sectors.