Thousands of gamers have resorted to live-streaming their video-game gaming for millions of internet spectators recently.

Only a few streamers have large regular viewers, with the majority inhabiting a middle tier with smaller audiences and even more slugging it out to develop little communities.

I never dreamed I’d get paid to play video games when I was a kid growing up in the 1990s. The popularity of live streaming is growing.

The sheer number of people interested in starting their own streaming business demonstrates this. Streaming campaigns could still be a novelty, even as the streaming industry continues to flourish and influencer sponsorships become an important component of modern marketing.

As a result, finding information or customer evaluations on them might be difficult. Working with streamers, however, is not a risky proposition.

Even with businesses that aren’t involved with gaming, the intimate relationship between artists and their communities leads to extremely engaging and profitable marketing.

I’m here to provide a hand and assist you in your growth.

We’ll talk about Instreamly, how to make money playing video games and streaming, and a lot more in this article. Let’s get started.

It is essentially a provider of Streamer management platforms. The platform allows you to monetize your streams by securing brand sponsorships.

Brands can reach their target audience using the platform, while streamers can make money by broadcasting. By linking streaming influencers and innovative companies in short-term sponsorships, instreamly combines the important traits of platforms and streaming influencer agencies.

All connections are formed automatically, which streamlines the campaign setup procedure and ensures uniformity across hundreds of streams at the same time.

Marketers can simply target their audience with Instreamly’s exclusive technology. The campaigns can be tailored to the game being played, the chat activity, and external data.

Furthermore, detailed performance statistics demonstrate your influence on the streaming audience, the Instreamly team is in frequent touch. As a result, the brand material is always shown to its greatest advantage.

The platform works for streamers as well as for brands. Here are the top features respectively.

If gaming is your passion, you will most likely want to devote as much time as possible to it. However, doing so while working hundreds of hours each week might be difficult.

So, how do you generate enough money from playing video games or broadcasting games to make it a full-time job?

What are the greatest methods for being paid to play video games?

There are a lot more than you may believe. Don’t simply concentrate on one aspect of gaming if you want to make money.

Streamers, on the other hand, might have a lot of fluctuation in their monthly revenue owing to factors like shifting viewing counts and sponsorships commencing or terminating.

On the other hand, if you put in some effort and plan ahead, you can create new revenue sources and accomplish tremendous outcomes.

As a result, it’s critical for any streamer, as well as anybody else who wants to make money playing games, to diversify their sources of revenue.

Take a look at some of the most profitable and well-known instances below.

Stream, of course. Even if you’re not a really talented gamer, people can find your streams enjoyable and financially supportive. Personality and charm are important.

It’s crucial to remember that streamers aren’t compensated merely for broadcasting (unless for sponsored programs), and thus it’s totally feasible to stream for hours and not earn a single penny.

You may be asking where the money comes from.

Advertising money and subscriptions are two sources worth mentioning. The income from Twitch and other streaming services is divided by the streamers, but there’s a catch.

To gain money from adverts (and other sources, such as Bits, Twitch’s virtual currency, or the aforementioned subscriptions) on Twitch, for example, you must first become an official Affiliate or Partner.

Million-dollar prize pools can be found in Fortnite, CS: GO, and PUBG events. These are just a few well-known examples; there is a slew of other games with thriving e-sports communities.

As a result, excellent players, many of whom are adolescents and young adults, can become esports stars and earn massive sums of money just by performing well.

Participating in esports events is one of the simplest methods to earn money from gaming, but it takes a lot of expertise. It takes a lot of dedication, training, and natural skill to become a professional gamer. Therefore it’s not for everyone.

However, if you succeed as a pro, you could be set for life.

Viewers can support their beloved content providers directly through donations (streamers, YouTubers, and so on). Even if the majority of them are only a few bucks individually, they can add up to be a significant source of cash for a streamer.

From time to time, many streamers also get larger donations. It’s very uncommon for fans at the top of contribution leaderboards to spend thousands of dollars in order to support their preferred player.

Donations are decided not just by the number of the audience, but also by the amount of interaction. A smaller, more involved group can be significantly more generous with gifts than a bigger, less closely linked society.

As a result, it’s critical to strive to increase audience engagement and urge people to give (in a non-annoying way).

Brand collaborations are one of the most lucrative sources of income for certain broadcasters. If you have to get them yourself, they aren’t exactly simple to come by.

Finding appropriate brands, contacting them, and managing contract discussions can be time-consuming. Instreamly aims to tackle this problem, making life simpler for broadcasters and allowing them to make more money.

It’s an excellent method for streamers of all sizes to interact with potential sponsors (including some of the world’s most well-known businesses) and expedite the process.

Affiliate marketing is an excellent option for both small and large streamers. It’s fairly straightforward — typically, a streamer receives a specific URL that directs viewers to a product.

When audience members purchase it through such a link, the content author receives a tiny affiliate fee from the transaction. The URL can be shared via social media, Twitch panels, or live chat.

In any case, it’s an approach worth exploring because it needs little work and can yield big results. The items you market should be consistent with your brand and relevant to your target audience’s interests.

Otherwise, it is less probable that someone will make a purchase.

What’s the future of gaming and live streaming?

Live streaming is no longer the same as it was when it first gained popularity. Even still, it appears as we’ve only begun to scratch the surface of what’s possible concerning streaming and gaming in general.

There is a slew of new technologies and concepts in the works that are well worth the wait. Many folks are already excited to test them out.

Streaming companies have made a number of initiatives to make broadcasts more participatory throughout the years. In certain games, the audience can vote in polls, place wagers, and even actively influence the action. This tendency does not appear to be going away anytime soon.

Another fascinating technology that has lately gained traction is holographic imaging. The core concept is to be able to turn video-captured individuals into interactive, high-quality holograms in real-time.

There are several applications for this technology in sports, e-commerce, and a variety of other fields, but when it comes to gaming, the most significant benefit is more realistic animations.

Many games have attempted to recreate real-world locales in great detail, both in their current form and in the past, with varying degrees of success. The first game that springs to mind are Assassin’s Creed, with Ubisoft carefully recreating locations like Paris and London.

When it comes to VR headsets, VR aficionados now have to pick between comfort and power. The experience is more polished and professional with wired alternatives. 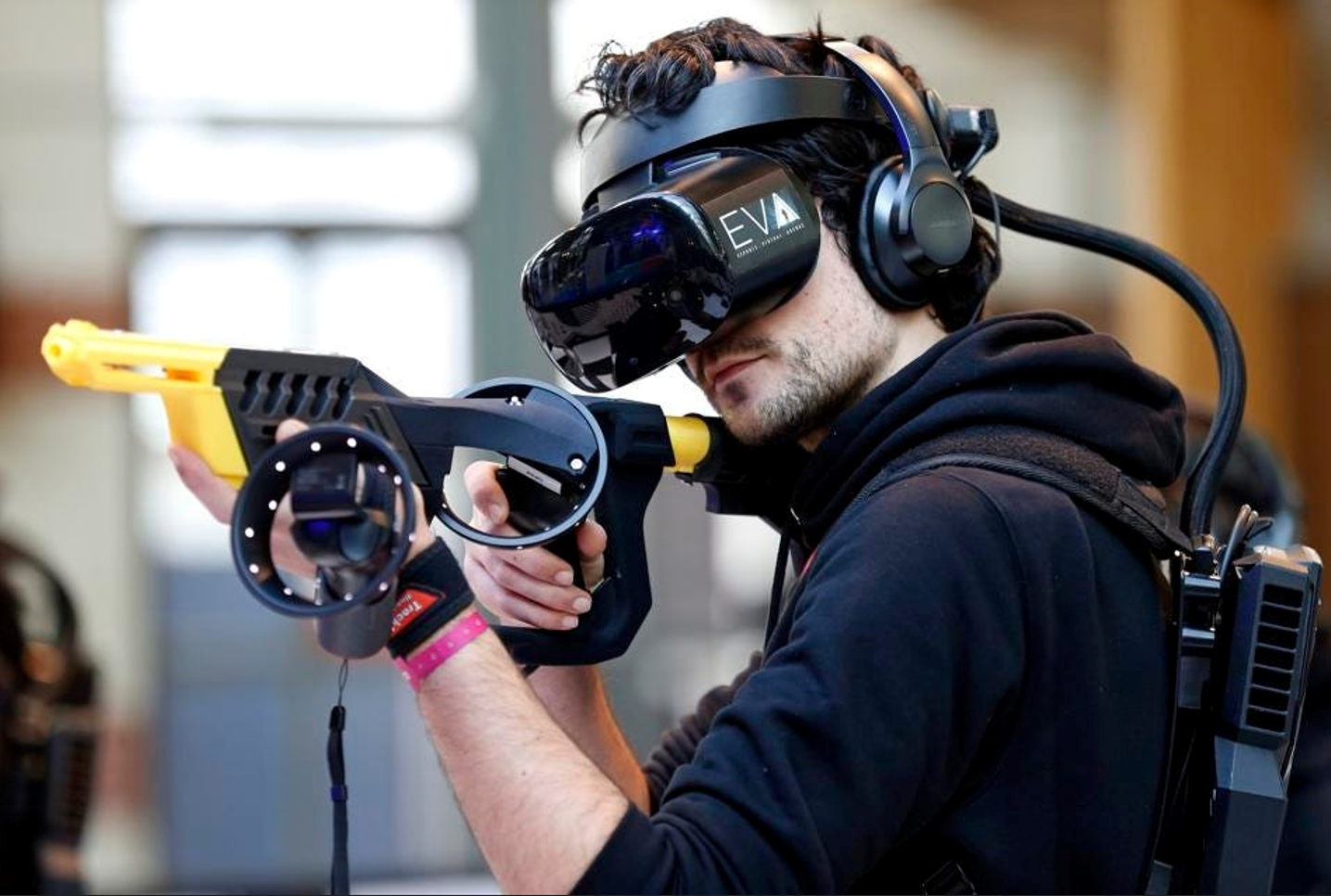 Wireless ones, on the other hand, are significantly more immersive, despite their (so far) restricted capabilities. It’s obvious that a strong wireless VR headset is required.

Oculus is working on an Oculus Quest Pro to address this issue. It’ll be an improved version of the company’s successful Quest and Quest 2 headsets.

Nobody knows what the game industry’s future will look like in general. However, depending on what is currently being developed, it is feasible to make an accurate approximation.

To mention a few, being able to hop right into a game via a broadcast and holographic imagery are intriguing notions that have the potential to be game-changers.

Live streaming is the future, but streamers have been neglected in terms of monetization choices for far too long.

Until recently, the alternatives for businesses to work with streamers were restricted and time-consuming, therefore just 0.01 percent of the most popular broadcasters had access to sponsorships. That is something we intend to fix.

They think that every streamer should be able to make money from their material and have the ability to select how and with whom they work. Because they, too, are streamers.

As a result, they developed a technology that allows businesses to easily interact with 1000 micro-streamers rather than just the most popular.