How to Deploy Stable Diffusion on AWS

We live in exciting times, with announcements about cutting-edge technology every week. OpenAI just released the cutting-edge text-to-image model DALLE 2.

Only a few people gained early access to a new AI system that can generate realistic graphics from natural language descriptions. It is still closed to the public.

Stability AI then released the Stable Diffusion model, an open-source variant of DALLE2. This launch has altered everything. People all across the internet were publishing quick results and being surprised by realistic art.

What is Stable Diffusion?

Stable Diffusion is a machine learning model capable of creating images from text, changing images depending on the text, and filling in details on low-resolution or low-detail images.

It was trained on billions of photos and can deliver results equivalent to DALL-E 2 and MidJourney. Stability AI invented it, and it was made public on August 22, 2022.

Hosting the model as a microservice also allows other creative apps to more readily exploit the model’s potential without having to deal with the complexities of running ML models online.

In this post, we will attempt to demonstrate how to develop a stable diffusion model and deploy it to AWS.

BentoML and Amazon Web Services EC2 are two options for hosting the Stable Diffusion model online. BentoML is an open-source framework for scaling machine learning services. With BentoML, we will build a reliable dispersion service and deploy it to AWS EC2.

Install requirements and clone the repository.

We will build a BentoML service to serve the model behind a RESTful API. The following example uses the single precision model for prediction and the service.py module to connect the service to business logic. We can expose the functions as APIs by tagging them with @svc.api.

Then, use the following command to start a BentoML service for testing. Locally running the Stable Diffusion model inference on CPUs is rather sluggish. Each request will take about 5 minutes to process. 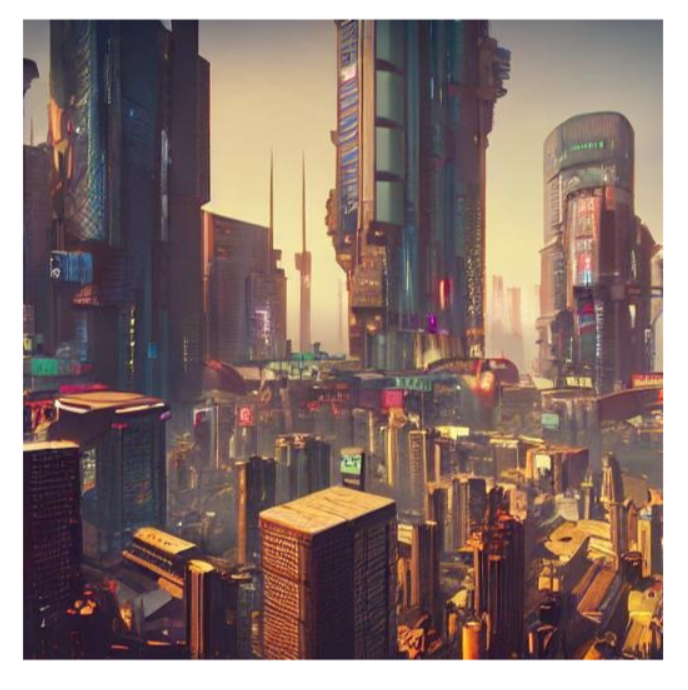 The bentofile.yaml file defines the required files and dependencies. 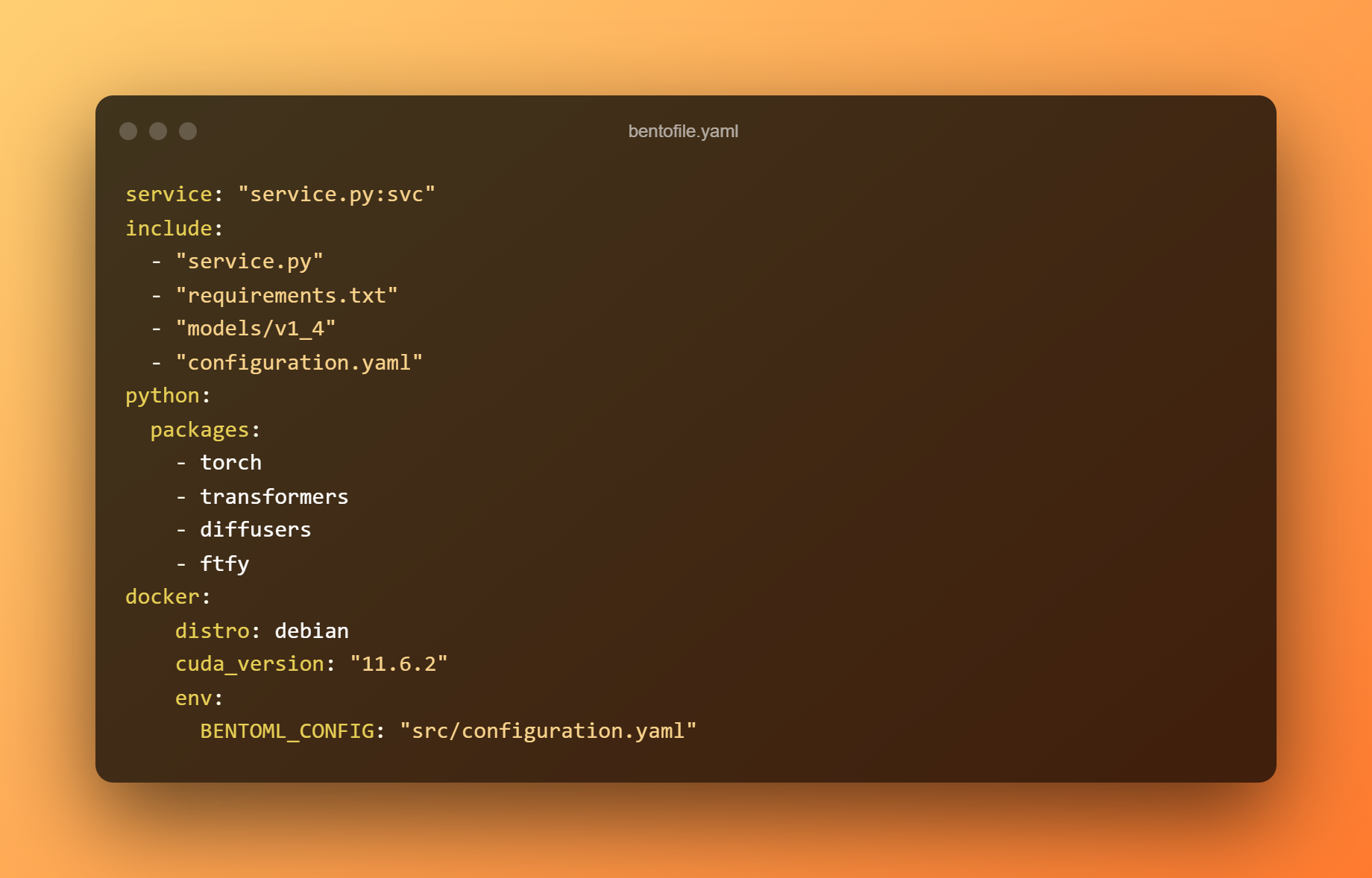 Use the command below to build a bento. A Bento is the distribution format for a BentoML service. It is a self-contained archive that contains all of the data and configurations needed to start the service.

The Stable Diffusion bento has been completed. If you were unable to properly generate the bento, don’t panic; you can download pre-built model using the commands listed in the next section.

Following are the pre-build models:

To deploy the bento to EC2, we will use bentoctl. bentoctl can let you deploy your bentos to any cloud platform using Terraform. To build and apply Terraform files, install the AWS EC2 operator.

In the deployment config.yaml file, the deployment has already been configured. Please feel free to edit to your requirements. The Bento is deployed by default on a g4dn.xlarge host with the Deep Learning AMI GPU PyTorch 1.12.0 (Ubuntu 20.04) AMI on the us-west-1 region. 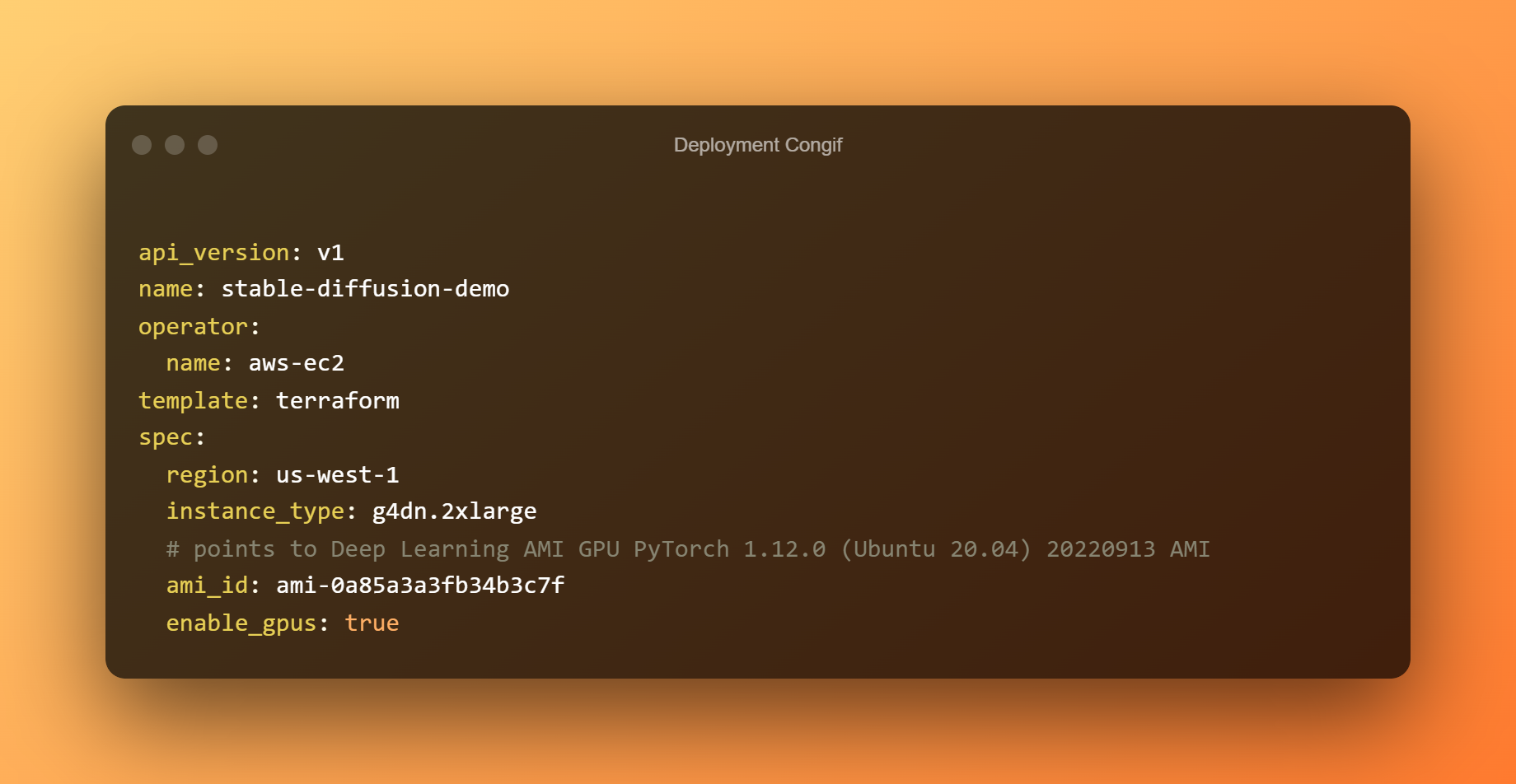 To access the Swagger UI, connect to the EC2 console and open the public IP address in a browser. Finally, if the Stable Diffusion BentoML service is no longer required, remove the deployment.

You should be able to see how fascinating and powerful SD and its companion models are. Time will tell if we will iterate on the concept further or move on to more sophisticated approaches.

However, there are currently initiatives underway to train bigger models with adjustments to better grasp the surroundings and the instructions. We attempted to develop the Stable Diffusion service using BentoML and deployed it to AWS EC2.

We were able to run the Stable Diffusion model on more powerful hardware, create pictures with low latency, and extend beyond a single computer by deploying the service on AWS EC2.