Digital advertising is due for disruption.

Have you ever been a victim of intrusive pop-up ads?

Do you worry about how eerily accurate some of the ads you see are?

Ad campaigns are becoming more predatory and invasive as the demand for our attention continues to escalate.

Users are in danger of malicious advertisements which can allow hackers to access personal data. They’ve also become savvy enough to find ways to avoid ads altogether. The invasive nature of digital ads has made ad-block technology more ubiquitous.

Publishers have an enormous amount of user data. These publishers have an incentive to sell the data to advertising exchanges for profit. Concerns about data privacy make it difficult for the average consumer to trust ad platforms.

Is there a way for users and publishers to have a better ad experience?

The Basic Attention Token (BAT) is a utility token that powers a new system of blockchain-based digital advertising and services. It was developed by Brave Software, Inc. who also developed the privacy-focused Brave browser.

BAT is built on Ethereum and is based on the ERC-20 standard. It aims to facilitate Brave’s decentralized ad exchange platform.

How does BAT work?

Afterward, you can opt-in to the Brave Rewards program so you can earn BAT tokens by viewing advertisements.

Publishers also get paid BAT as an incentive to make great content that attracts more users.

When Brave Rewards is active, the Brave browser will tally the time the user spends on each site. Brave can then automatically send a monthly BAT contribution to the sites the user visits.

As the user continues to browse the internet with Brave Rewards, their browser will begin learning their preferences to show relevant ads.

All of this works without having to collect someone’s browsing history or activity. The information used to decide on which ads to deliver remain safely on the user’s device.

Since the Brave browser and BAT project are open-source, anyone can audit the code for any malicious intent.

Besides earning money from Brave ads, any user can also “tip” BAT to any of their favorite publishers to reward them for their content.

For example, if you have a blog set up, you can sign up to be a creator for Brave, allowing other Brave users to directly send you any amount of BAT as a sign of support. 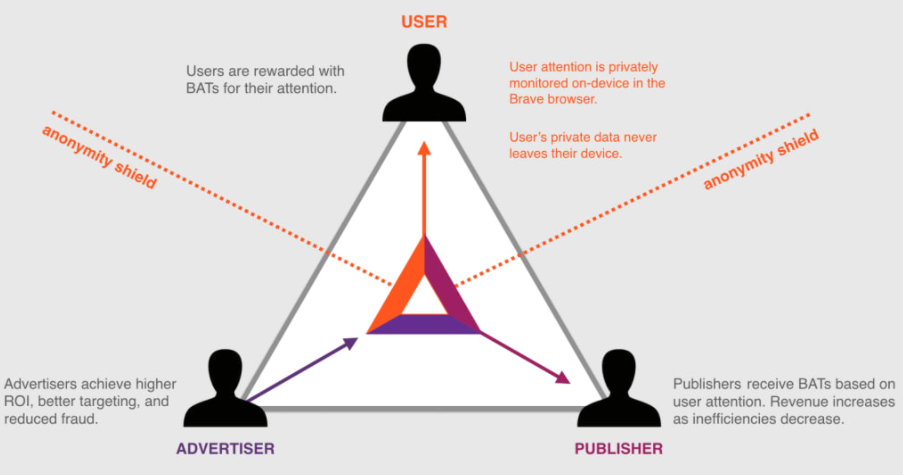 History of the Pay-to-Surf Model

The pay-to-surf model is not unique to Brave. In the late 1990s, various pay-to-surf companies such as AllAdvantage capitalized on the idea that anyone could make money on the internet without having to do much.

These PTS companies provided software which allowed the company to track which websites the user visited and show relevant banner ads on top of the user’s screen. Members were usually limited on the amount of time per month they could be paid for.

PTS programs incentivized their users to refer new members to the platform. This led to an abundance of spam accounts and other ways to cheat the system, including mechanical mouse-moving devices to allow users to get paid without even having to be on the Internet.

These sorts of programs largely fell out of favor after the dot.com crash. Brandon Eichs, the creator of the JavaScript programming language, found promise in the idea, especially with the rise of the data economy and growing concerns over data privacy.

In May of 2017, Brave launched its initial coin offering (ICO) and raised $35 million dollars.

Future of the BAT ecosystem

As of December 2021, there are currently 46 million monthly active users who are using Brave, and over a million creators who are on board the Brave Rewards platform.

The Basic Attention Token itself has a market cap of over 2.03 Billion dollars and is available on most cryptocurrency exchanges such as Binance and Crypto.com. 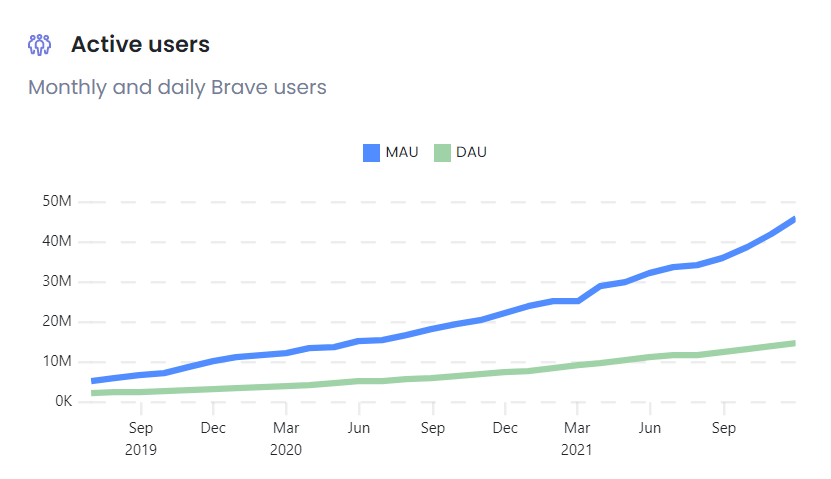 The Brave ecosystem keeps growing every year. This year, they launched the Brave Wallet, which aims to be a self-custodial cryptocurrency wallet that can hold a variety of different tokens.

The Brave team is also working on progressively decentralizing the ad platform through their THEMIS protocol.

At the moment, Brave Ads is still fairly centralized. The browser achieves privacy through cryptographic protocols and client-side ad matching.

With the THEMIS protocol, the Brave team hopes to move the ad platform to a blockchain with smart contract functionality.

With data privacy becoming a major concern, digital advertising is due for disruption.

The Brave ecosystem powered by the Basic Attention Token, gives a way for users, publishers, and ad campaign managers to participate in digital advertising without compromising the anonymity of the user.

Brave remains strategically placed as an alternative to big players like Google Chrome and Firefox.

By focusing on the advantages of privacy and fairness, the Brave user base will only continue to grow in the coming years. Billions of users could make Brave and BAT household names and make the internet a bit more private for the average user.

If you enjoyed this article, do subscribe to HashDork’s weekly newsletter for more articles on the latest AI & Future Tech news.