The Ethereum Merge – Importance, Risks, and What to Expect

After years of testing and development, Ethereum will finally upgrade their network to proof-of-stake in a stage known as “The Merge.”

Ethereum has been planning on moving away from the proof-of-work algorithm for some time.

After the successful launches of the more environmentally-friendly proof-of-stake blockchains such as Solana and Cardano, Ethereum has made it their main priority to switch their consensus algorithm.

What is the Ethereum Merge?

The Merge refers to the network upgrade that will join the existing execution layer of Ethereum with the new proof-of-stake consensus layer. This will effectively eliminate the need for the use of mining to secure the network.

The PoS layer, known as the Beacon Chain, has already been running in parallel with the main network since December 1st, 2020.

As the Mainnet merges with the Beacon chain, all transactional history is transferred over as well. Current holders of ETH do not need to worry about doing anything to prepare for the merge itself.

Why Move From Proof of Work?

The proof-of-work algorithm enables miners to add blocks to the blockchain. Crypto miners require specialized high-end equipment to perform the computations needed to mine. 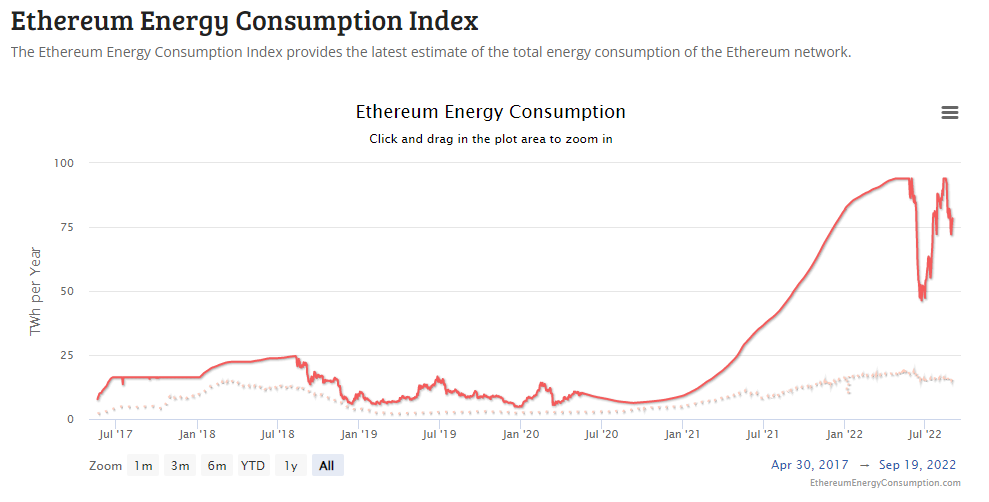 These mining rigs cost a lot of energy to run. The annual carbon footprint of the Ethereum network is comparable to that of Hong Kong.

The barrier of entry is also high, which means the average person likely won’t be able to afford becoming part of the network. Both Bitcoin and Ethereum have also been criticized for their environmental cost.

There is an actual real-world cost to running mining rigs. Because of this, miners often consolidate in places with cheap electricity such as China. This inevitably leads to the geographical consolidation of miners.

Considering all of this, there is definitely room for improvement when you have a network running on PoW.

Vitalik Buterin, co-founder of Ethereum, listed a few reasons why Proof of Stake is superior over Proof of Work. He explained that networks can recover more easily from PoS and also offer more security at practically the same cost.

Besides security, PoS is also much more sustainable. Merging to a Proof-of-Stake algorithm will reduce network usage by at least 99.95%.

What will happen to Ethereum Miners?

To incentivize the switch, the Ethereum team created the so-called difficulty bomb. The mechanism will lead to what is referred to as the “Ice Age”, a stage where the chain becomes so difficult to mine that the entire proof-of-work consensus “freezes.

The mechanism works by increasing the difficulty level of puzzles to solve in order to mine blocks. The Terminal Total Difficulty or TTD refers to the total cumulative difficulty threshold required to mine the final block in Ethereum. This number is set by the developers to maintain a fixed number of hashes left.

What is the Importance of the Merge?

The Merge is the first step of a years-long transition to a more scalable, secure, and sustainable architecture for Ethereum.

Once Ethereum runs using proof-of-stake, sharding will become a possibility for the network. Sharding is a type of blockchain architecture where validators can work on smaller portions of the blockchain rather than validating the entire chain.

The Ethereum Foundation expects developers to deploy sharding in Ethereum sometime in 2023.

The merge is also important because it will affect the rate at which the network distributes new token rewards. At the moment, mining rewards are still much larger than staking rewards.

However, the opportunity to stake Ethereum for passive income may create a higher market interest in Ethereum. Higher interest may lead to increased participation as well.

Risks of the Ethereum Merge

While the Ethereum Merge will certainly lead to more opportunities in the Ethereum ecosystem, some experts are wary of potential risks that could occur during and after the merge event.

While the merge itself has been rehearsed several times in the past few months, there is always the possibility of technical issues.

A glitch or bug stemming from the merge could tarnish Ethereum’s reputation among developers and investors alike.

Some people are also speculating that Ethereum miners may opt to create a fork of Ethereum. Doing so will allow these miners to keep earning but having more than one Ethereum network to keep track of could hurt Ethereum’s reputation.

The Ethereum Foundation itself voiced concerns over scammers taking advantage of the merge.

For example, some scammers may fool new investors to buy ETH2 tokens or swap their current ETH with a phony “upgraded” version.

When will the merge happen?

According to the Ethereum developers, we should expect the Merge to occur within Q3 or Q4 of 2022.

The pivotal Bellatrix upgrade will activate on the Beacon Chain on September 6. This upgrade will set in motion the start of the Merge.

When the TTD reaches a certain value, the network will merge the Execution layer with the new Consensus later. This value is expected to be reached by September 20.

Ethereum’s transition to proof-of-stake will finally give Ethereum a chance to make major changes to the network.

Though there are risks involved in the merge, moving to a more sustainable mechanism is better for both the environment and the users.

The Merge will give Ethereum a boost to directly compete with other PoS layer 1 blockchains like Cardano and Solana. These other blockchains have become popular mainly because they offer staking.

Ethereum’s prominence in the market combined with its vast ecosystem of dApps and Layer 2 networks could lead to a new prosperous era for the Ethereum network.

What do you feel about The Merge?