Cosmos Network: The Internet of Blockchains

The Cosmos Network is a decentralized network of parallel blockchains that work independently of one another.

Founded in 2014 by Ethan Buchman and Jae Kwon, the goal of the network is to create an ecosystem of blockchains that both scale and interoperate with each other.

There are currently over 263 apps in the Cosmos network, known as the Interchain, including Binance Chain, Terra, and Cosmos Hub. 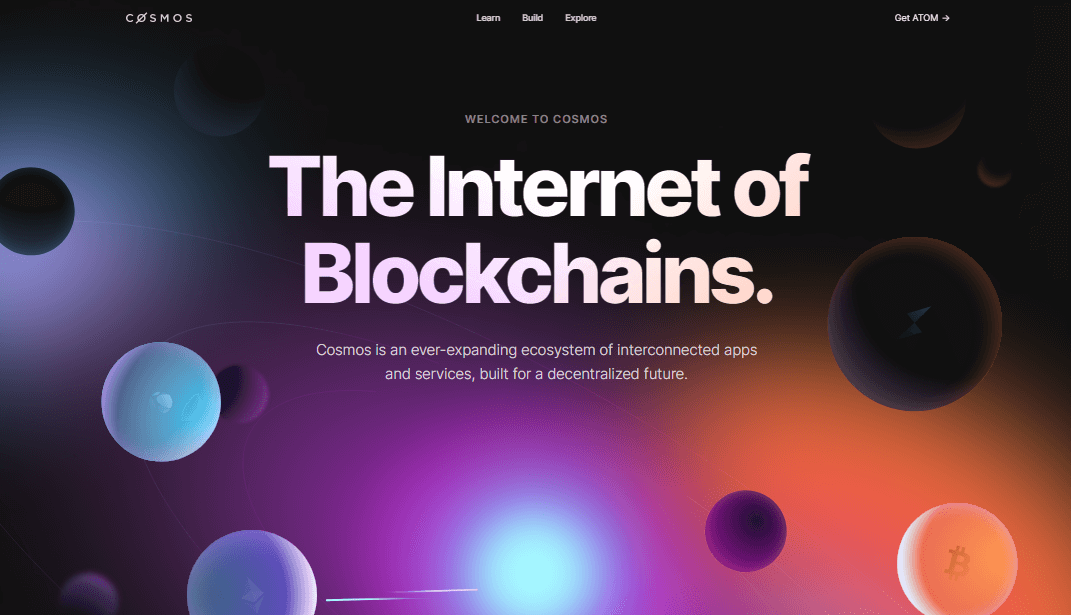 Cosmos aims to become an Internet of Blockchains. The platform uses a set of open-source tools such as Tendermint, Cosmos SDK, and IBC that work together to let developers quickly create their own custom blockchains.

Why is there a need for custom blockchains?

There are a few reasons you might want to build an application-specific blockchain over a smart contract in Ethereum.

Firstly, an existing platform such as Ethereum might not be flexible or customizable enough for your use case. Setting up your own blockchain allows you to define the logic and methods required for your project.

Secondly, you may encounter issues with sovereignty. Building an independent chain allows you to break free from the constraints and protocols of an existing system.

This guide will explain what problems Cosmos is attempting to solve and look into the various technologies and protocols that are built into the Cosmos Network.

The Cosmos blockchain aims to solve several limitations that currently exist in many of the popular blockchains, namely Ethereum. These limitations are scaling, usability, and sovereignty.

Scalability is an important factor for a successful blockchain ecosystem. The Ethereum blockchain has a shared rate of 15 transactions per second. All dApps built on Ethereum have to compete for these limited resources.

Usability is essential when you want to provide more flexibility for developers. Ethereum’s EVM was built to accommodate all use cases, which leads to several compromises. Developers are also limited to a handful of programming languages.

Finally, sovereignty is a key factor in making sure that blockchains are secure and have an independent form of governance.

Many platforms allow applications to have their own sovereignty, but these apps remain tethered to the platform’s own protocols. This leads to two layers of governance, which can slow down development and progress. 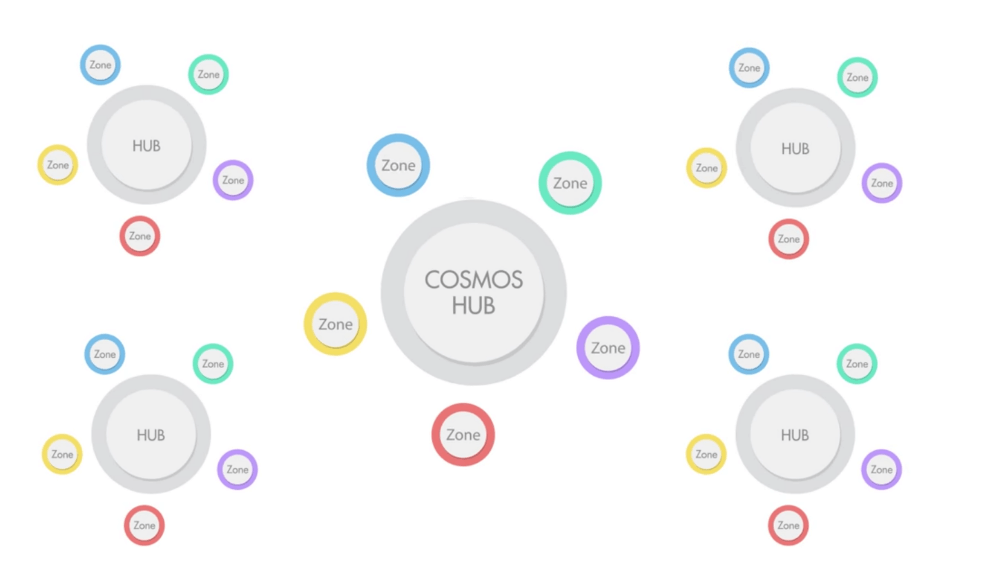 The Cosmos Network follows a “hub & spoke” architecture. A “Zone” is an application-specific blockchain. Each Zone is a spoke that connects to a hub. Hubs can connect with other hubs. Anyone is free to create their own Hubs and Zones in the blockchain.

Cosmos Hub keeps track of the state of all connected blockchains and helps facilitate token transactions. 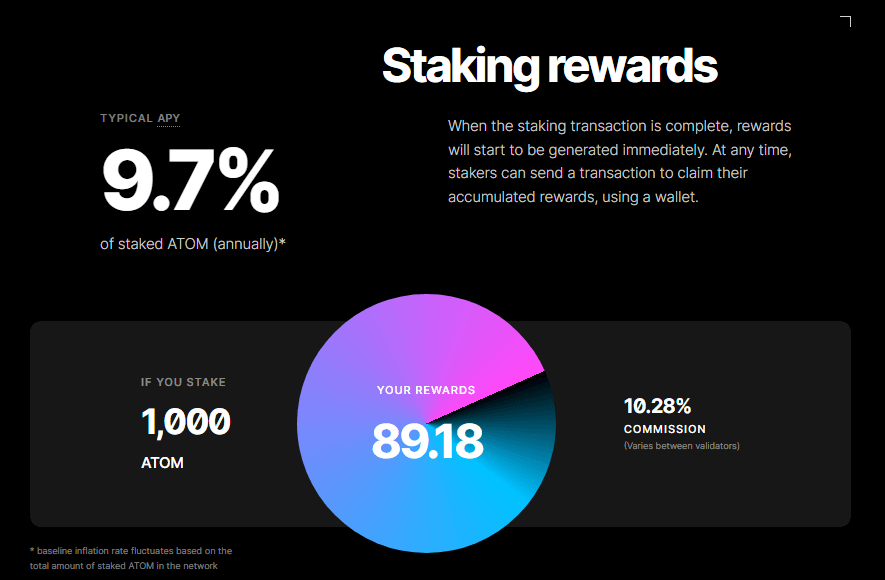 The ATOM token is the native token of the Cosmos Hub. Users can stake ATOM to claim staking rewards and transaction fees.

Users who stake ATOM also get to vote for future protocol and governance decisions for Cosmos. 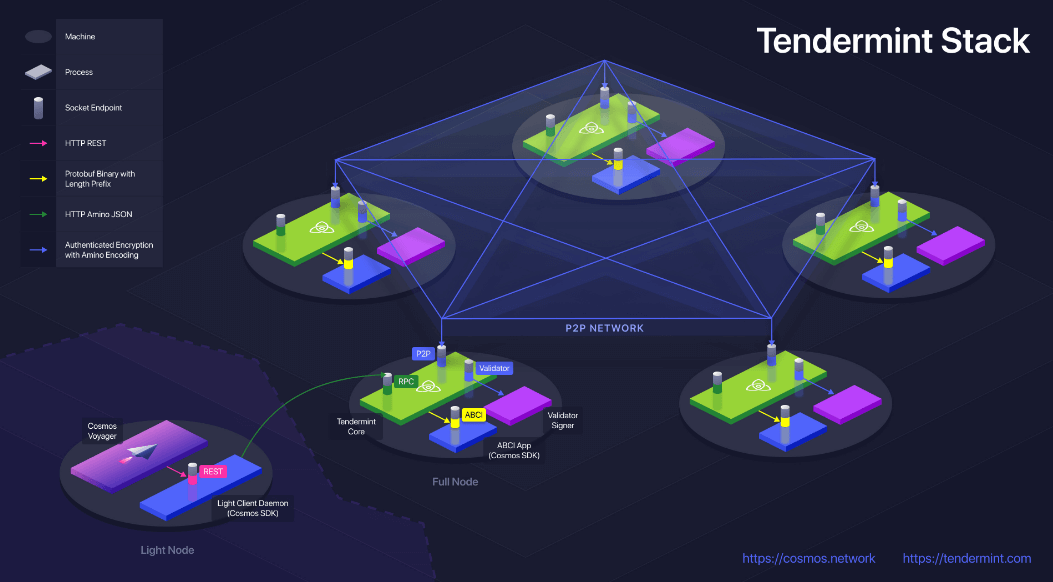 Tenderdmint is a piece of software designed to replicate an application securely and consistently on many machines. It aims to tolerate machines failing in arbitrary ways, including instances where code is used maliciously.

The ability to tolerate these instances is known as Byzantine fault tolerance.

The consensus engine, called Tendermint Core, makes sure that transactions in the network are all consistent with each other.

The application interface is known as the Application BlockChain Interface or ABCI. This interface allows transactions to be processed in any given programming language. 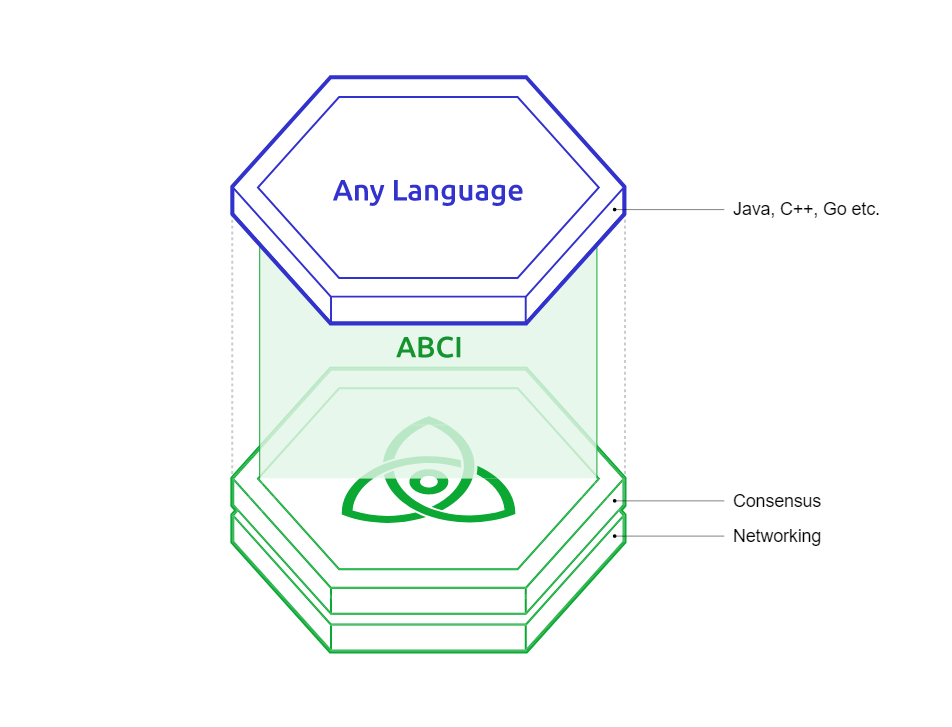 Tendermint can support both public and private blockchains and can either be proof of stake or permission.

Tendermint is designed to be general-purpose. It is even possible for you to use Tendermint to replace the consensus algorithms of other blockchains. Ethermint is a scalable Ethereum built using the Cosmos SDK and uses the Tendermint Core as its consensus engine.

The IBC protocol is the backbone of the Cosmos ecosystem. The protocol allows blockchains to talk to each other.

The modular design of the IBC protocol allows app developers to use the protocol without bedding in-depth knowledge on how it works behind the scenes.

How does the IBC work?

First, Chain A locks the 10 tokens. This process is known as bonding, and the tokens are now locked or “bonded”. Chain A then sends proof to Chain B that 10 tokens have been bonded.

It is now up to Chain B to verify this proof against Chain A’s header. If the proof is verified, Chain B creates 10 token vouchers.

This means that the Chain A tokens never really leave the chain. The token vouchers on Chain B are simply proof that a certain number of Chain A tokens are bonded to the voucher.

Comparison with Other Internet Blockchains

The Cosmos platform is not the only blockchain project that focuses on chain interoperability. 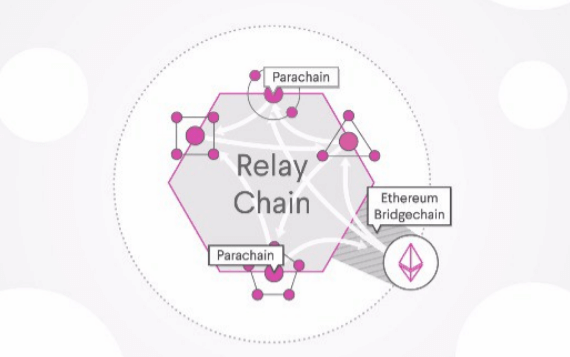 The Polkadot blockchain is designed to allow unrelated blockchains to send data to each other securely. It was founded by Dr. Gavin Wood, one of the co-founders of Ethereum alongside Vitalik Buterin. Similar to Cosmos Network, Polkadot also aims to be a sort of Internet of Blockchains.

Cosmos and Polkadot deal with governance and membership differently. Polkadot has a fixed number of slots for Parachains which is allocated via an auction. The Cosmos Network allows anyone to build a hub or zone.

The platform’s governance decisions are determined by the amount of DOT (the native token of Polkadot) voters have. The Cosmos Network, on the other hand, has no single governance process, but the Cosmos Hub and its native token ATOM provides a similar function

Polkadot and Cosmos also differ in how they secure their network.

In the Cosmos Network, every blockchain is independent and secures itself. Each zone is secured by its set of validators.

Polkadot, on the other hand, runs under a shared security model. Each Parachain are children of a parent chain known as a Relay Chain, which keeps track of the global state of all its Parachains. 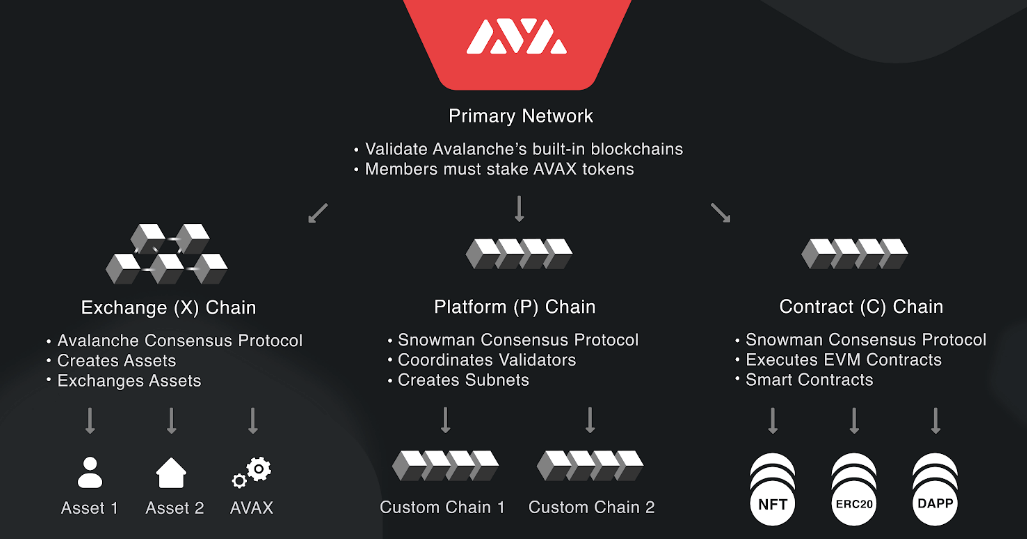 The Avalanche platform is an open-source platform built to launch decentralized applications and blockchains.

Avalanche, like Cosmos, allows anyone to create their own application-specific blockchains that are interoperable with other blockchains in the platform.

Unlike Cosmos, where each blockchain has its own validators, Avalanche has Subnets which can validate several blockchains using a single validator set. A Subnet or subnetwork is a dynamic set of validators in the Avalanche ecosystem.

The platform’s main subnet is called the Primary Network, which validates all of Avalanche’s built-in blockchains.

All subnet members must be a member of the primary network. This means that every validator of every blockchain in Avalanche must also validate Avalanche’s own built-in blockchains.

The Cosmos project is a promising platform for developers who are looking to develop powerful blockchains easily that are interoperable with other chains.

The Tendermint engine allows blockchain applications to scale quickly, and the IBC protocol allows assets to be exchanged between blockchains easily.

The need for application-specific blockchains will only continue to grow. Platforms such as the Cosmos Network will allow developers to easily and confidently build their own projects without having to worry about security and scalability.