Whereas traditional computers employ silicon-based processors, quantum computers use quantum systems like atoms, ions, photons, or electrons. They employ quantum features to represent bits that may be created in various quantum superpositions of 1 and 0.

So, what exactly does the term “quantum” mean in this context? Is it a significant leap?

The term quantum derives from the Latin word quantum, which means “quantity.” It is a ‘discrete quantity of energy proportional in magnitude to the frequency of the radiation it represents’ in physics. Discrete refers to something that is neither continuous nor distinct. Quantum refers to unique or significant amounts in this sense.

What is quantum computing?

Quantum computing is using algebraic methods to construct algorithms for calculations, which are often the same or similar to those used in quantum physics. Quantum mechanics, in turn, refers to a basic physics theory that dives into the explanation of nature’s physical qualities at the size of atoms and subatomic particles.

A quantum computer is thus a hypothetical computer capable of implementing such algorithms. As a result, quantum computers are fundamentally based on quantum bits, also known as qubits, which may be created from a single electron.

The quantum material behaves according to quantum mechanics rules, making use of notions like probabilistic computation, superposition, and entanglement. These ideas serve as the foundation for quantum algorithms, which use the capabilities of quantum computers to tackle complicated problems.

In this article, I’ll discuss all you need to know about quantum entanglement.

What is quantum entanglement?

Quantum entanglement occurs when two systems are so closely linked that knowing about one gives you immediate knowledge of the other, no matter how far apart they are.

Scientists such as Einstein were baffled by this phenomenon, which he dubbed “a spooky action at a distance” since it broke the rule that no information can be sent faster than the speed of light. Additional experiments using photons and electrons, however, verified entanglement.

Entanglement is the cornerstone of quantum computing. Quantum entanglement in physics refers to a highly strong link between quantum particles. This connection is so strong that two or more quantum particles can be inexorably connected while being separated by enormous distances.

To further grasp this, consider a simple comparison that isn’t related to physics or computing. Consider what would happen if not one, but two coins were tossed. Usually, whether one coin lands on heads or tails has little bearing on the outcome of the second coin toss.

However, in the case of entanglement, both parts are connected or entangled, regardless of whether they are physically separate. In this case, if one coin lands on heads,, the second coin will likewise display heads, and vice versa.

Quantum entanglement is indeed a situation in which two systems (typically electrons or photons) are so closely linked that acquiring information about one system’s “state” (the direction of the electron’s spin, say “Up”) would yield instantaneous knowledge about the other system’s “state” (the direction of the second electron’s spin, say “Down”) regardless of how far apart these systems exist.

The phrases “instant” and “regardless of how far apart they are” are significant. This phenomenon has perplexed scientists like Einstein, since the state is not defined until it is measured, and information transmission defies the classical physics rule that information cannot be carried faster than the speed of light.

However, entanglement has been proven to use both photons and electrons since the 1980s, thanks to research and testing that began in the 1980s.

Two subatomic particles (electrons) can be produced so that they can be described by a single wave function. Entanglement may be achieved in one method by allowing a parent particle with zero spins to decay into two entangled daughter particles with equal but opposite spins.

If two daughter particles do not interact with anything, their wave functions will stay equal and opposing no matter how far apart they are measured. Scientists determined via testing that the time of entanglement had no impact on the information.

As a result, information flows at this pace. But we have no control over it – this lack of control restricts the uses of Quantum Entanglement, such as sending a message or other information faster than the speed of light.

What role does entanglement play in quantum computing?

Because processing one qubit reveals information about numerous qubits, doubling the number of qubits does not necessarily increase the number of processes (i.e., the entangled qubits).

Quantum entanglement, according to studies, is required for a quantum algorithm to deliver an exponential speedup over classical calculations.

Several applications can benefit from this one-of-a-kind physical characteristic, which will alter our present and future. Quantum encryption, superdense coding, maybe faster-than-light transmission, and even teleportation might all be enabled by entanglement.

Quantum computers have the potential to tackle time and processing power-intensive challenges in a variety of industries, including finance and banking.

Quantum entanglement is a phenomenon that might help such computers by reducing the amount of time and processing power required to handle data flow between their qubits.

In classical cryptography, the sender encodes the message with one key, while the recipient decodes it with the shared key. However, there is a danger that a third party will obtain knowledge about the keys and be able to intercept and undermine cryptography.

Creating a safe channel between the two parties is the cornerstone to unbreakable cryptography. Entanglement can cause this. As the two systems are entangled, they are correlated with each other (when one changes, so does the other), and no third party will share this correlation.

With an impenetrable quantum key distribution, quantum cryptography has already been realized (QKD). QKD uses randomly polarized photons to communicate information about the key. The recipient deciphers the key using polarizing filters and the technique used to encrypt the message.

The secret data is still transferred through standard communication lines, but only the exact quantum key can decode the message. Because “reading” the polarized photons changes their states, any eavesdropping alerts the communicators to the intrusion. 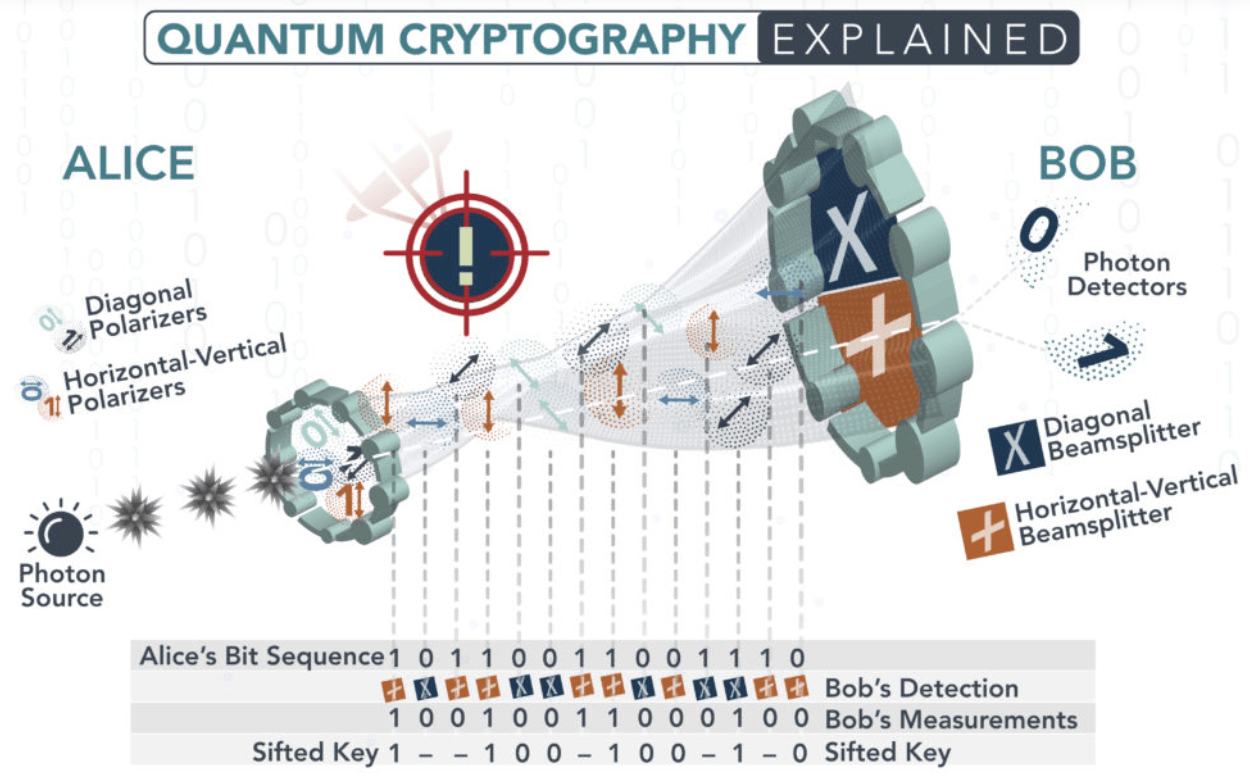 QKD technology is currently constrained by fiber optic cable, which can deliver a photon for around 100km before becoming too faint to receive. In 2004, the first entangled QKD bank transfer occurred in Austria.

Making sure the transmission of unbreakable and tamper-proof communications that are provably secure based on physical principles has obvious applications in finance, banking, military, medical, and other sectors. Several businesses are now using entangled QKD. 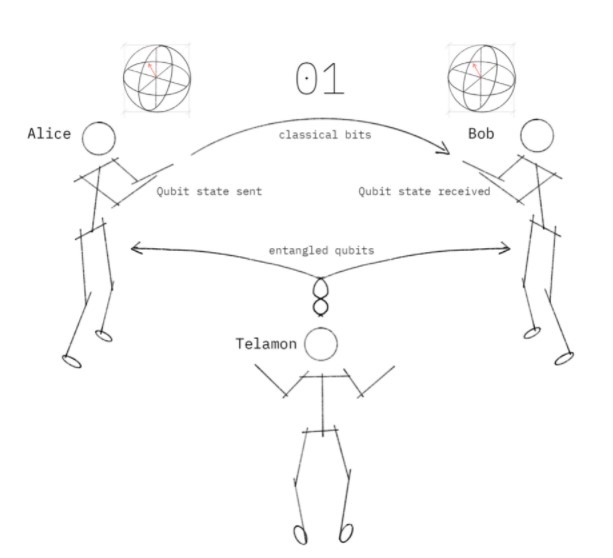 Quantum teleportation is also the method of transmitting quantum information between two parties, such as photons, atoms, electrons, and superconducting circuits. According to research, teleportation allows QCs to run in parallel while using less electricity lowering power usage by 100 to 1000 times.

The distinction between quantum teleportation and quantum cryptography is as follows:

The power needs of quantum computers generate heat, which is a challenge given that they must operate at such low temperatures. Teleportation has the potential to lead to design solutions that will accelerate the development of quantum computing.

The human body, like all creatures, is continually changing due to the interaction of millions of chemical and biological processes. Until recently, they were assumed to be linear, with “A” leading to “B.” However, quantum biology and biophysics have uncovered a huge amount of coherence inside biological systems, with QE playing a role.

The way the diverse subunits of protein structures are packed together is developed to allow for sustained quantum entanglement and coherence. Quantum Biology is still a theoretical topic with various unanswered concerns; when they are addressed, applications in medicine will become increasingly visible.

Superdense coding is the method of transmitting two conventional bits of information using a single entangled qubit. Code that is super-dense can:

Each generation of communication has called for more data transfer. A comparable gain in information will be possible with superdense coding.

Quantum entanglement may allow us to work with data in previously unimaginable ways. By integrating quantum computing with entanglement, we will be able to answer issues that demand a massive amount of data in a more efficient and safe manner.

With the addition of biological and astronomical applications, QE might be used to answer the issues that humans have long pondered: where did we come from and how did it all begin?

The more technology advances, the more applications we will find for it— it has tremendous promise!

Introduction to FinOps for Beginners