More quickly than ever before, the world is changing due to digital change.

With the impending advent of another brand-new wave of technology capable of drastically altering current paradigms with astounding speed and power: quantum computing, understanding the fundamental ideas of the digital era will become even more important.

A breakthrough technique called quantum computing makes use of quantum physics to solve problems that are beyond the scope of conventional computers.

Quantum theory principles show how matter and energy behave at the atomic and subatomic scales, and IBM’s Qiskit is an open-source quantum software development kit that aids in creating quantum computing systems.

This article seeks to explain this and provide you with an overview of quantum computing.

We’ll explain to our readers with the aid of an open-source quantum computing SDK, ie. Qiskit and let them explore using Jupyter Notebooks hosted at IBM Quantum Lab.

What is Quantum Computing?

Quantum computing is a branch of computer science that focuses on developing computer technology using ideas from quantum theory.

It takes advantage of the exceptional capacity of subatomic particles to simultaneously exist in many states, such as 0 and 1.

They are able to process a lot more data than regular computers.

Then it was discovered that quantum algorithms were more effective at doing some computer tasks than their classical counterparts.

Superposition and entanglement, two concepts from quantum physics, are the foundations upon which these supercomputers are based.

In comparison to conventional computers, quantum computers can currently do jobs orders of magnitude quicker while consuming a great deal less energy.

We must proceed with the operation of quantum computers in order to fully comprehend it. Let’s start now.

How really does a quantum computer work?

Their capacity to exist in numerous states at once is thought to be the cause. On the other hand, conventional computers can only be in a single state at once.

There are three key concepts you must comprehend in order to comprehend how quantum computers operate:

Bits are the fundamental components of traditional computers. Quantum bits, or Qubits, are the basic units of quantum computers.

Fundamentally, quantum bits operate differently. A binary bit, sometimes known as a traditional bit, is a switch that can be either a 0 or a 1.

We receive the bit’s current state back when we measure it. Qubits are an exception to this. Qubits can be compared to arrows pointing in three dimensions.

However, they can also choose to be in a superposition state.

An arrow is in the condition where it points in any other direction. The superposition of 0 and 1 results in this state. A Qubit will still produce either a 1 or a 0 as the result when it is measured.

However, the arrow’s orientation determines a probability that is relevant.

You will have a 50% chance of winning for each if the arrow is in the center. In a nutshell, that is superposition.

The bits in a traditional computer are independent of one another. One bit’s state has no bearing on the other bit’s state.

The qubits in quantum computers can get entangled with one another. This implies that they merge into a single big quantum state.

For illustration, consider two qubits that are in various superposition states but are not yet entangled. At this time, their probability does not rely on one another.

When we entangle them, we must discard those independent probabilities and determine the probabilities of all the alternative states we can escape, namely, 00, 01, 10, and 11.

The probability distribution of the entire system is changed if the direction of the arrow on one qubit is changed because the qubits are entangled.

The qubits’ independence from one another has been lost. Each of them is a component of the same sizable state. No matter how many qubits you have, this is still the case.

There is a possible combination of 2n states for a quantum computer with n qubits.

You can put classic computers in whatever condition you choose, but only one at a time. All of those states can exist concurrently on quantum computers as a superposition.

How can the computer benefit from being in all those states at once? The last element of interference enters at this point.

A quantum wave function can be used to describe the state of a qubit.

The fundamental mathematical description of everything in quantum physics is provided by wave functions.

When many qubits are entangled, their individual wave functions are combined together to form a single wave function that describes the overall state of the quantum computer.

Interference is the result of adding these wave functions together. When waves are added together, they might constructively interact and combine to create a larger wave, just like water ripples do.

They can also interact destructively to counteract one another. The varied probability of the various states is determined by the quantum computer’s overall wave function.

We can alter the likelihood that certain states will emerge when we measure the quantum computer by altering the states of various qubits.

Even though the quantum computer can exist in several superpositions of states at once, measurements only reveal one of those states.

Now, let’s start with the Qiskit.

Qiskit is an IBM-funded software framework designed to make it easier for anyone to enter the field of quantum computing.

Because quantum computers are difficult to get, you can obtain one through a cloud provider, such as IBM, using their Qiskit toolbox.

It is available for free, and all of its code is open source.

There is an online textbook that teaches you all the fundamentals of quantum physics, which is very useful for those who are unfamiliar with the subject. Python is used to develop the Qiskit toolkit.

So, if you’re familiar with the Python programming language, you’ll recognize a lot of code.

The software framework is suitable for those who wish to learn about quantum computing while also gaining practical experience.

The most fundamental aspect of Qiskit is that it operates in two stages. One of the steps is the construct stage, in which we create several quantum circuits and use those circuits to solve the problem.

Then, after completing the building stage or reaching the solution, we proceed to the next stage, which is known as the execute stage, in which we attempt to run our build or solution in the various backends (state vector backend, unitary backend, open ASM backend), and after the run is completed, we process the data in the build for the desired output.

Getting started with Qiskit

On your personal computer or the Jupyter Notebook that IBM hosts, you can locally install it. Write the following code to install locally on a Windows computer:

We need to register here in order to access the API token that enables us to utilize IBM’s quantum devices, and then we can begin working with the company’s website. You can imagine doing this by using a Qiskit-installed Jupyter Notebook running online.

You can access it by selecting your Profile from the menu in the upper right corner of the page, then selecting Account information. You can find your API token under the section on API tokens in the form of ***. It is copied and then entered into the following code:

Once this code has been executed, your API token will be saved on your computer, enabling you to use IBM’s quantum devices. Enter the following to determine if you have access to such a device:

If the aforementioned code runs, you should be able to run code not just on your computer but also by sending the built-in quantum circuits to IBM’s quantum devices and receiving results.

So, using the circuits library, we can begin developing our first quantum algorithm. We start by importing the essential dependencies from Qiskit into our project.

We then construct a two-qubit quantum register and a two-bit conventional register.

So now we have both a classical and a quantum register established. Using those two, we can construct the circuit and if, at any time throughout the circuit’s modification, you wish to sketch what the quantum circuit looks like, write the following code:

We can see from the picture that the circuit consists of two quantum bits and two classical bits.

As it is, this circuit lacks gates, making it uninteresting. Now let’s construct the circuit using the quantum gates. Like classical logic gates (AND, OR gates) are for normal digital circuits, quantum gates are the fundamental components of quantum circuits.

Applying the Hadamard gate to the first qubit is the first step in creating entanglement. Then, using the following code, we will add a two-qubit controlled x operation:

Now that these two operators have been used to construct our quantum circuit, it is time to measure the quantum bits (qubits), take those measurements, and store them in the classical bits. Let’s create the necessary code to achieve that:

The diagram below depicts the layout of our circuit:

The circuit must then be run on a traditional computer simulator. The circuit has been completed. And examine the outcomes of that execution.

The information obtained from performing that circuit is stored in the result variable. Let’s display these results using a plot histogram. 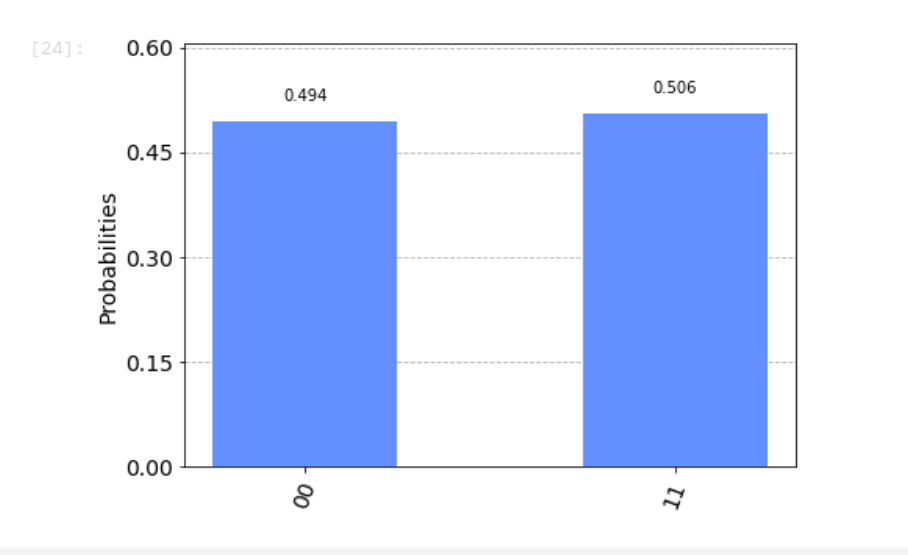 That is what happens when we run our quantum circuit. For the numbers 00 and 11, we receive probabilities of around 50%. Your initial quantum computer circuit was built. Congratulations!

A collection of demonstrative tools and applications are offered by Qiskit Finance. These include Ising translators for portfolio optimization, data suppliers for actual or random data, and implementations for pricing various financial options or credit risk assessments.

Applications like protein folding and electronic/vibronic structure computations for both excited and ground states are supported by Qiskit Nature.

It offers all the parts required for connecting classical codes and automatically converting to different representations needed by quantum computers.

Quantum machine learning methods that use them to address various problems, such as regression and classification, are provided by Qiskit Machine Learning as well as fundamental quantum kernels and quantum neural networks (QNNs) as building blocks.

It also enables the connection of QNNs to PyTorch for the purpose of incorporating quantum elements into classical operations.

Despite the fact that quantum computers will be able to break many of the encryption techniques used today, it is anticipated that they will create hack-proof substitutes.

Critical Cloud Computing Challenges and How to Prevent Them