The availability of applications has never been taken as seriously as it is today when we use apps for more than just communication, whether personal or professional and when apps are the business.

Applications that aren’t constantly online, or are unstable, lose their users and relevance, eventually becoming obsolete. It happened in a flash. Because the internet never sleeps and operates 24 hours a day, 7 days a week, the same idea must apply to apps.

Scalability is critical to doing this and assuring application availability. Load balancing is one of the most important components in ensuring availability. Many people still believe that load balancing can be accomplished with a simple script.

However, this is not the case. It alone provides access to programs all over the world — at any time and from any device.

In this post, we’ll take a deep look at load balancing, its algorithms, and how it relates to microservices, among other things. Let’s begin!

What is load balancing?

As the demand for a website or business application grows, a single server will soon be unable to handle the whole load. Organizations distribute the workload over numerous servers in order to satisfy demand. This method, known as “load balancing,” keeps a single server from getting overloaded, which can cause it to slow down, drop requests, or even crash.

Load balancing distributes network traffic equally to avoid failure due to resource overload. Applications, websites, databases, and other computer resources perform better and are more available using this method. It also aids in the proper and timely processing of user requests.

From the perspective of the user, load balancing serves as an unseen intermediary between a client and a collection of servers, ensuring that connection requests are not dropped. Applications, websites, databases, and online services would most likely collapse if demand became too great without load balancing. 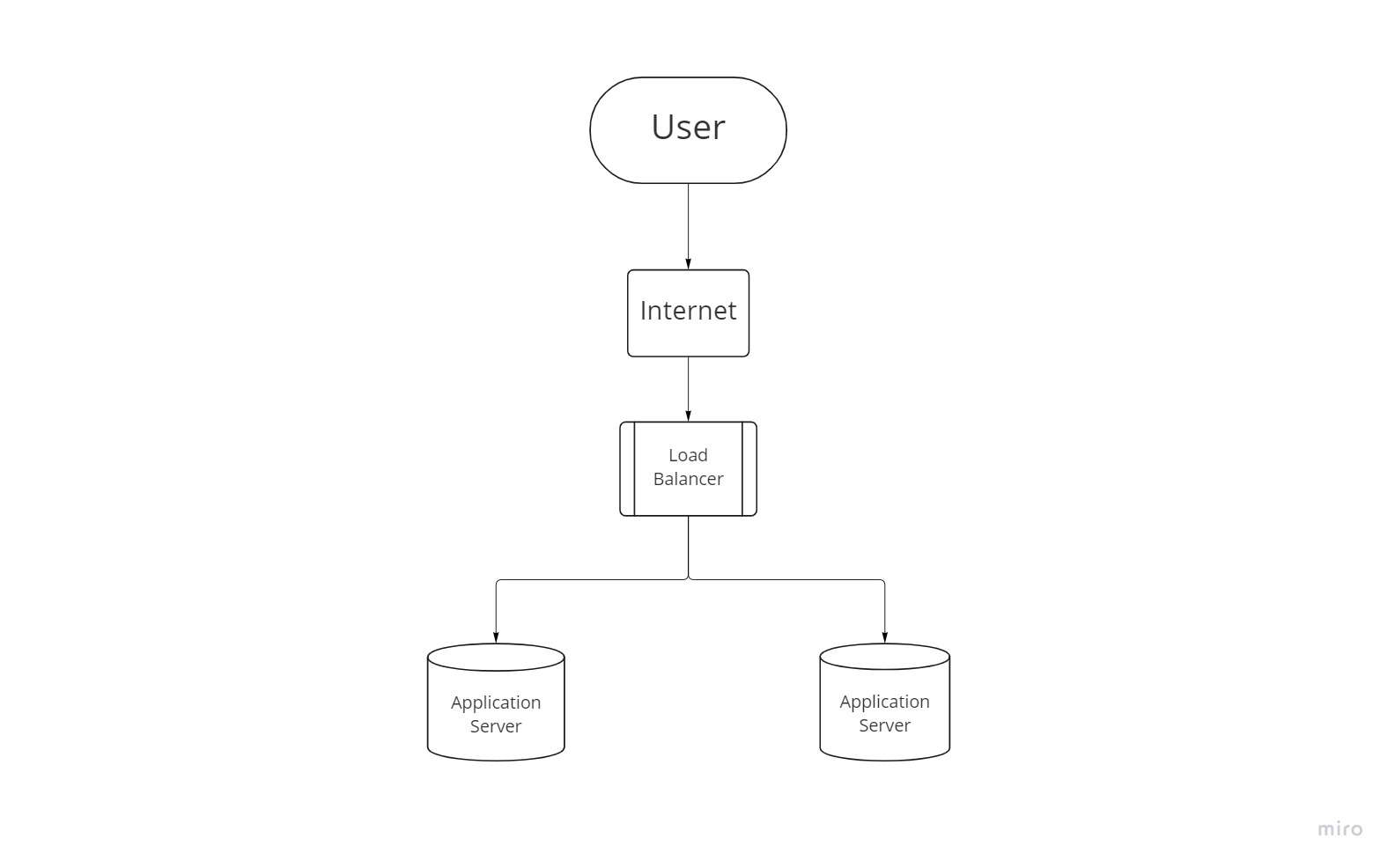 Hundreds of thousands of user requests can be sent to a single high-traffic website at the same time. Multiple servers are required to correctly populate web pages with the requested content, such as text, images, video, and audio streaming. Load balancing is commonly employed in high-traffic website server farms, as well as DNS servers, databases, and File Transfer Protocol (FTP) sites.

How does load balancing work?

It works as follows:

To select which of the servers in a server farm receives the next request, each load balancing technique uses a set of criteria. There are five typical approaches for load balancing:

Physical hardware, such as an appliance, makes up hardware load balancers. These routes traffic to servers depending on factors such as the number of existing connections, processor usage, and server performance. Hardware load balancers have proprietary firmware that has to be maintained and updated when new versions and security fixes become available.

Software load balancers are typically easier to set up than their hardware counterparts. They’re also more cost-effective and adaptable, and they work well with software development environments. The software method allows you to customize the load balancer to your environment’s exact requirements. The increased flexibility may come at the expense of additional time spent setting up the load balancer.

Software balancers provide you greater flexibility to make modifications and updates than hardware ones, which have a more closed-box approach. Prepackaged virtual machines can be used as software load balancers (VMs). Virtual machines will save you some setting time, but they may not have all of the functionality available in their hardware counterparts.

We will use the Spring Cloud library to build apps that connect to other apps in a load-balanced manner. While processing remote service requests, we can easily construct load balancing using whatever technique we like. Consider the following code as an example. We’ll begin with a basic server application.

The server will only have one HTTP endpoint and will be operated in several instances. Then we’ll build a client app that uses Load Balancer to distribute requests across several server instances.

We begin with a basic Spring Boot application for our example server:

To begin, we inject a customizable variable called instance_ID. This helps us to distinguish between numerous instances that are operating. Following that, we create a single HTTP GET endpoint that returns a message and instance ID. The default instance with ID 1 will operate on port 8080. We only need to add a few program parameters to launch a second instance:

Let’s now have a look at the client code. This is where Load Balancer comes in, so let’s begin by incorporating it into our application:

Following that, we develop an implementation of ServiceInstanceListSupplier. This is one of the most important interfaces in Load Balancer. It specifies how we locate accessible service instances.

We’ll hard-code two separate instances of our example server in our sample application. They run on the same system but utilize separate ports: This class has only one purpose: it creates a load-balanced WebClient builder for making remote requests. Our annotation employs a fictitious name for the service.

This is due to the fact that we will most likely not know the precise hostnames and ports for running instances ahead of time. As a result, we utilize a fictitious name as a placeholder, and the framework will replace actual information when it selects a running instance.

Next, let’s make a Configuration class that will be used to instantiate our service instance supply. Take note that we use the same alias as before:

We can now build the real client application. Let’s send 10 queries to the sample server using the WebClient bean from earlier: 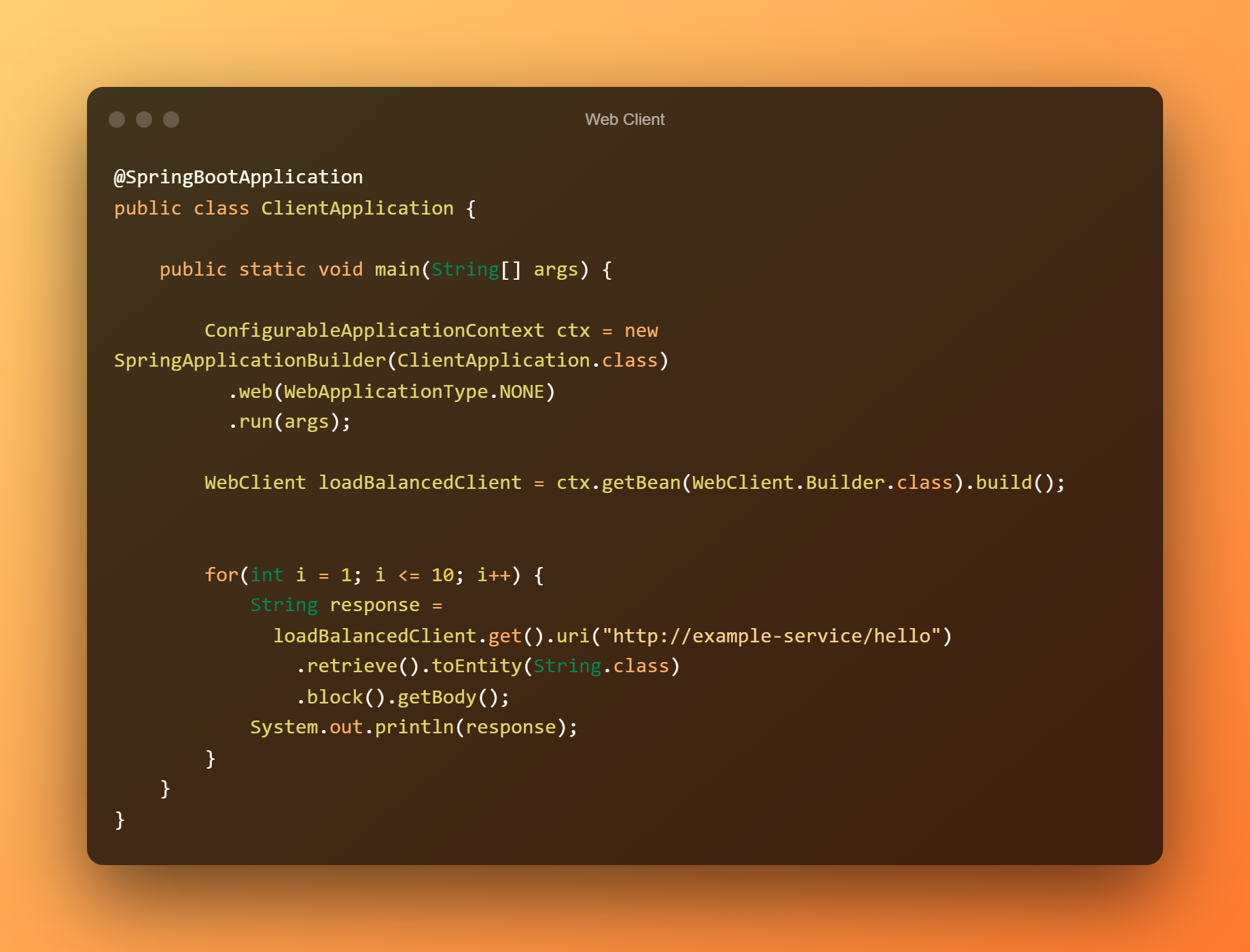 We can see from the output that we’re load balancing between two separate instances:

These enterprises’ teams have implemented Agile and DevOps strategies in order to produce apps faster and with a lower failure rate than traditional methods. However, you must strike a balance between the distributed architecture’s complexity and the application’s demands, scale requirements, and time-to-market limitations.

For so many years, application delivery controllers (ADCs) have been critical to meeting service-level requirements for corporate applications hosted on-premise or in the cloud. A client engaging with a microservices-based application does not need to know about the instances that are providing it in order to grow the client and microservices independently.

This is precisely the decoupling provided by a reverse proxy or a load balancer. Again, load balancing is the solution for ensuring that microservices can handle demand, security, and availability.

When you combine traditional North-South load balancing between client and microservices-based apps with East-West deployment for horizontal scalability, you get a substantial boost. The objective is to maintain the safe and regulated environment required by IT without sacrificing development agility or DevOps automation requirements.

Load balancing provides various benefits by improving resource utilization, data delivery, and response time for high-traffic websites and apps, as well as databases that get a large number of queries. Load balancing ensures that user requests are fulfilled quickly and correctly in high-traffic scenarios.

They save users the aggravation of dealing with sluggish programs and resources. Load balancing also helps to avoid downtime and simplify security, lowering the risk of lost productivity and earnings for your company.

Cross-domain microservices configuration, deployment, and maintenance may be error-prone, expensive, and time-consuming. IT should use automation, visibility, analytics, and orchestration best practices and technologies that are compatible with their agile and DevOps processes to make the setup and maintenance of these microservices easier.

Google Cloud Spanner – Everything you need to know